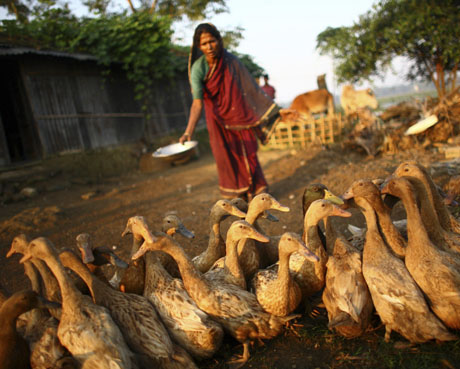 Bangladesh | Amina Begum with the ducks she was able to buy as a result of a microfinance loan. But a new report questions whether market based initiatives, like micro-credit, are always beneficial / GMB Akash - Panos pictures

The report explores the issues around micro-credits and micro-insurance, which are part of what the report calls market-based entitlements. They have become part of social protection packages as part of the bid to alleviate poverty and foster women’s empowerment. Micro-credits, in particular, are very small loans that are offered to poor people who do not have access to traditional credit in the developing world. The report, though, states that their value in poverty alleviation has been overstated.

“Market-based entitlements may provide some short-term relief from poverty and in some cases, improve women’s status and control over income, but in the long run they institute a new layer of exploitation, increas[ing] responsibilities and work burdens,” writes the author, Dr Amrita Chhachhi, a senior lecturer in women, gender and development studies at the ISS of the Erasmus University of Rotterdam, Holland.

Proponents of the micro-credit initiative, such as the Grameen Bank in Bangladesh consider there to be a linear relationship between micro-credits and women’s empowerment. That is, giving women access to micro-credit will automatically lead to poverty alleviation and in turn empower women. However, Dr Chhachhi, in her report argues that this is a narrow focus on economic empowerment.

Dr Chhachhi’s report finds that the results have been mixed. There has been limited participation of clients from extremely poor households as interest rates can often reach 30 per cent. As targeting is based on income, or consumption definitions of poverty i.e. what consumer goods people are able to buy, large numbers of women have been excluded, the report finds.

The report argued that micro-credits cushion the poor in times of hardship rather than getting the poor out of poverty. “Micro-credit, has at best, led to consumption smoothing… [but] it has played a protective role rather than being a tarpaulin for springing out of poverty,” writes Dr Chhachhi.

Whilst some studies conducted in India and Bangladesh found that micro-credit has resulted in women gaining greater decision-making power in the household and increased mobility, there have also been negative outcomes. “Women take on responsibilities for income and savings while men are freed from responsibility for household well-being,” writes Dr Chhachhi.

According to the report, one of the main problems with micro-credits is that they fail to address the care economy (unpaid work in the domestic sphere, such as looking after children and the household) leading to a double burden for women. That is, they leave women solely responsible for generating household income as well as providing care. Dr Chhachhi notes, “The broader question is whether entitlements through the market… reduce or increase vulnerability.”

Poverty-relief packages that only depend on market based entitlements, such as micro-credit, as the blueprint will not be effective in achieving poverty alleviation and women’s empowerment, the study reported. “The most effective initiatives in terms of gender relations have been those wherein micro-credit is only one component of a multi-pronged programme,” writes Dr Chhachhi.

Successful examples such as SEWA (Self-Employed Women’s Association), a workers organisation, combine the struggle for rights, recognition of development and social security as well as micro-credits.

The report argues that citizenship-based and employment-based entitlements achieve a measure of success with regards to gender equality and provided some level of social protection in South Asia.

Overall, the report stressed the necessity of viewing social protection through a gendered lens to ensure that the rights of women were protected. This is because women tend to define poverty not just in terms of income and social well-being but also in issues such as access to land, housing and other assets. “There was an emphasis [by women] on not just the lack of bread but rather on the lack of voice… and broader issues of dignity,” writes Dr Chhachhi.

Title: Democratic citizenship or Market based entitlements? A gender perspective on social protection in South Asia