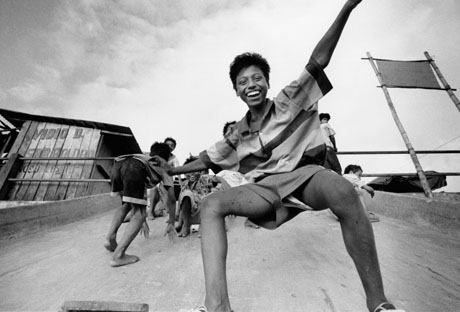 Children play on a roof near the Pacific coast of Ecuador. A new report has said that health professionals in the coutry are compromising adolescents' sexual health by stereotyping how men and women act / Rhodri Jones - Panos pictures

Researchers have criticised the attitude of health service providers in Ecuador, saying their judgmental approach is compromising adolescent girls’ rights to sexual healthcare.

In 2007 the Ecuadorian government introduced a National Plan for Adolescent Pregnancy Prevention. However, a study carried out by researchers at Umeå University in Sweden, suggests that attitudes towards adolescents (aged 10-19) negatively affects the delivery of healthcare for this group.

One of the problems, according to the researchers, is that women are often stereotyped by professionals. Women are perceived as ‘uninterested in sex and responsible mothers whereas men are viewed as sexually driven and unreliable’.

According to the report, certain health professionals ‘idealised motherhood, stigmatised abortion, oriented services towards married women, and idealised marriage and the traditional nuclear family, despite the acknowledgment of the high-levels of violence within such institutions’.

“The main message delivered to girls could be summarised as ‘avoid sex, endure pregnancy’, which is unrealistic and reinforces the idea that only girls are responsible for reproductive matters and parenthood,” says one of the authors, Dr Isabel Goicolea, a post-doctoral fellow in the Department for Epidemiology and Global Health at Umea University in Sweden.

The study, published this month in the journal of International Health and Human Rights, was conducted in Orellana province in the Amazon basin, where 40 per cent of adolescents become pregnant, compared with an average of 20 per cent for the rest of the country. The researchers held six focus group discussions and 11 in depth interviews with 41 health service providers in the region, including NGO workers, doctors and nurses and policy makers working in sexual health.

Adolescent pregnancies are perceived as “dangerous” by providers and policy makers because pregnancy and childbirth related complications are the leading cause of death among girls aged 15-19. However, health providers agreed that girls should be encouraged to “endure” pregnancy, “leaving limited room for abortion”. Despite the participants’ views on abortion, it is important to note that abortion is illegal in Ecuador and so providers are legally unable to openly provide the service.

The researchers found that policies and documents relating to adolescent pregnancies are written in technical language that requires years of formal education to understand. This has led to the segregation of adults who are technically qualified to “deal” with teenage pregnancies and the adolescents themselves. As a result, the report claims that “adolescents were not treated as autonomous individuals but as incomplete and immature and unable to make their own decisions”.

Although all participants strongly supported youth engagement, the interpretation of the concept differed, researchers found. Many health professionals considered that youth opinions were not as important as professional opinions. However, younger professionals talked of the need for youth inclusion at all levels to better inform policy and practice.

The report calls for more interaction between girls and health service providers in order to increase girls’ access to services and empower girls and help them to make their own decisions.

Dr Goicolea told Panos London: “It is important to strengthen and widen the array of services adolescents are entitled to, in order to include access to safe abortion, social services, educational services, and services related to gender based violence.”

Since publishing the report, the authors have held workshops to discuss the findings with young people and health service providers in Orellana. Workshops have also been held in the capital Quito with representatives from Plan for Adolescent Pregnancy Prevention.

“The object [of the report] is to start a discussion that could lead to the improvement of the programmes and services being delivered to youth in Ecuador,” concludes Dr Goicolea.

Title: Adolescent pregnancies and girls’ sexual and reproductive rights in the Amazon basin of Ecuador: an analysis of providers and policy makers’ discourses