You are here: Home » Blogs & features » Print features » Nigeria tries to save its dry north

Nigeria tries to save its dry north 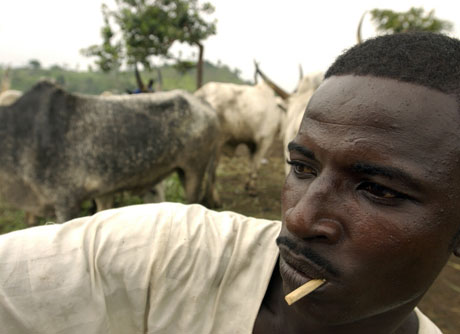 As the desert creeps southwards, nomads and peasant farmers in the region have become increasingly locked in conflict / Jacob Silberberg - Panos pictures

It is only eight o’clock in the morning, and Nigerian farmer Hamisu Abdulahi is already exhausted. Under the intense heat, Abdulahi, a resident of Birnin Gaye village in Bauchi state in Northern Nigeria, groans as he prepares the land.

He has worked on the farm for barely an hour and yet he feels like retiring for the day. He has to clear this previously uncultivated stretch of land, because of the desert’s constant encroachment on the traditional farmland.

“The desert was very far away many, many years ago. But it has been coming towards us and is now taking over our farms. Our farms are no longer as productive as they were,” he says.

He waves in salute to his wife and two daughters as they walk by, in search of firewood and water. They have a long day ahead as drying streams and arid lands mean longer searches for these essentials. “My wife now spends the whole day securing food, water and firewood for cooking, and has very little time to work to earn income to help supplement the little I make.”

Soon he decides to call it a day and visit his brother-in-law and fellow farmer, Sanni Mohammed, who was injured during a clash with nomadic cattle herders.

Locked in conflict over land

As the desert creeps southwards, nomads and peasant farmers in the region have become increasingly locked in conflict. While the farmers detest the animals grazing on their farmlands, the nomads become violent whenever their cattle are deprived of food or attacked.

In recent years the effects of climate change have become more pronounced in Northern Nigeria, which falls within the Savannah semi-arid zone and includes 19 of the nation’s 37 states (including Abuja, the Federal Capital Territory). Abdulahi’s plight typifies the situation in the region as it struggles with drought and desertification.

Things have got so bad that, according to the Abuja-based Weekly Trust, the minimum vegetation cover has fallen well below 10 per cent, let alone the 25 per cent cover judged necessary to support life.

Worried by the threat to food security, livelihoods, water resources and health, government officials and NGOs have underlined the need for immediate action on climate change in the region. The surface area of Lake Chad – straddling the borders of Nigeria, Chad, Niger and Cameroon – has shrunk from 9,650 square miles (25,000 square km) in 1963 to 521 square miles (1,350 square km) today.

Environment and health officials are also concerned that the increase in temperature may have contributed to high levels of the bacterial disease, cerebro-spinal meningitis. Through increased flooding, climate change has affected diseases like malaria by increasing mosquito breeding grounds.

Nigeria’s president, Umar Musa Yar’Adua, said in his 2008 World Environment Day address: “About 23 million Nigerians are under threat of environmental degradation, and the implication is that Nigeria’s environment and its socio-economic development could be sensitive to the phenomenon of global warming and climate change.”

Following its establishment recently in Nigeria’s Federal Environment Ministry, the Special Climate Change Unit (SCCU) has swung into action to develop a National Climate Change Policy (NCCP). On 10 February this year history was made when a Climate Change Committee was inaugurated in the House of Representatives – Nigeria’s lower legislative chamber.

Already, the nation has begun initiatives to adapt to and mitigate the effects of climate change. For instance, under the Building Nigeria’s Response to Climate Change (BNRCC) project Northern Nigerian farmers will soon get access to a new variety of drought-resistant groundnut which can be cultivated even in water-scarce, semi-arid lands. The tests for the variety are already at an advanced stage

The BNRCC project is funded by the Canadian International Development Agency (CIDA) and managed by a consortium of local and international groups. It is also exploring alternatives to traditional crop farming and livestock rearing. Farmers need to find new ways of cultivating crops, and BNRCC researchers are hopeful they can use brackish water, water with a slightly higher salt content, to establish aquaculture in dry, degraded farmlands. This could help to improve nutrition and ensure people get a more varied diet. In the project there are also plans to cultivate vegetables in brackish water, which will help farmers to overcome problems caused by soil salinity.

Professor David Okali of the BNRCC says Nigeria hopes to imitate the success of climate change adaptation initiatives elsewhere in Africa. He points to experience of Nigeria’s neighbour, Burkina Faso, which has for over a decade operated a seasonal forecasting initiative. It works on the principle that rural farmers will increase their productivity if they have better weather forecasts. The project ‘Climate Forecasting for Agricultural Resources’, showed that most rural producers, even those with limited resources, benefited from climate forecasts by making small adjustments to their livelihood and production strategies. It will be interesting to see how Nigerian farmers benefit from a similar scheme.

But weather forecasting is but one prong of attack. Like its continental neighbours, Nigeria’s small farmers face a number of problems, including water shortages and poor access to credit to help them pay for adaptation measures. Nigeria’s climate adaptation programme has plenty of challenges ahead.