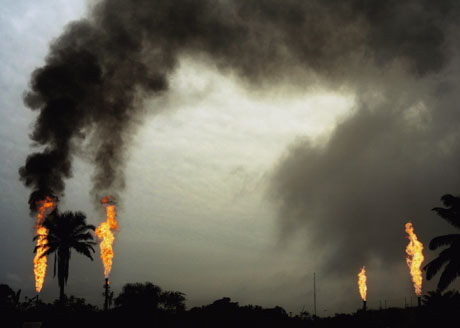 Gas flares at an Agip installation in Nigeria / Tim A. Hetherington - Panos pictures

Nigeria is being urged to take a tougher stance in negotiating oil contracts with China, including an insistence that technology and skills transfers become part of the deals.

In a report for the South African Institute of International Affairs (SAIIA), research associate Gregory Mthembu-Salter argues that the nature of China’s dealings in Nigeria is changing. During former president Olusegun Obasanjo’s term in office, Nigeria gave oil blocs to Chinese energy companies in return for infrastructure projects built by Chinese companies and financed by Chinese banks.

Mthembu-Salter says that China now tends to buy established oil companies in Nigeria instead of embarking on infrastructure deals. Late June this year the China Petroleum and Chemical Corporation (Sinopec) announced a $7.2 billion deal to buy Canada’s Addax Petroleum, which has extensive on and off-shore operations in Nigeria.

Nigeria is Africa’s biggest crude oil producer and a major oil supplier to the US. China’s investments in Africa are set to grow as its demand for natural resources and potential export markets rises.

“The change in administration [in 2007] means that Nigeria’s spoils are up for renegotiation, Mr Mthembu-Salter explains. “As Western companies have been forced to do in China,” he continues, “Chinese multi-national companies should be obliged to build the capacity of Nigerian sub-contractors and to work towards the manufacture of a growing proportion of their materials in Nigeria.”

Shortly after the SAIIA report was published last month it emerged that CNOOC, a Chinese state-owned energy company, is in negotiations with the Nigerian government to buy six billion barrels of oil, equivalent to one in every six barrels of the proven reserves in Nigeria. If successful, this would see China buying Nigeria’s oil directly.

The attempt could pitch the Chinese into competition with western oil groups, including Shell, Chevron, Total and ExxonMobil, which partly or wholly control and operate the 23 blocs under discussion.

Mr Mthembu-Salter argues Nigeria is in a good position to strengthen its negotiation skills. China’s demand for oil to feed its growing economy means it cannot afford to walk away from Nigeria. It also desperately needs new markets for its mass-produced cheap goods.

Since trading began between the two countries in the 1960s, Nigeria has often complained about the low quality of goods, according to the report. China on the other hand, argues that the quality is reflected in the low prices its goods sell at.

“Both sides have valid points regarding quality of Chinese goods. However, it is due to legislative failure that both sides are not getting what they want,” says Mr Mthembu-Salter.

He urges Nigeria to address what he sees as a large, persistent trade imbalance in China’s favour. “Nigeria needs to improve its negotiation capacity by pushing for skills and technological transfer,” he concludes.

“If Nigerian public and private sector players doing business with China could improve their negotiating skills and be more ambitious about their negotiating positions… the future of Nigeria-China relations could be brighter and more beneficial for Nigerian than their past.”