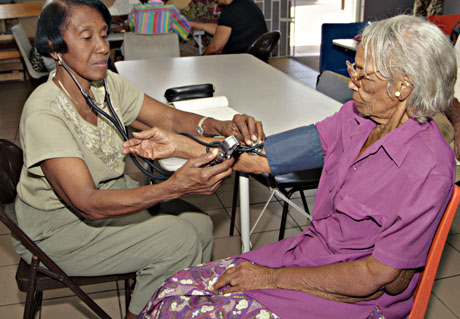 The migration of nurses to wealthier countries could potentially benefit Caribbean healthcare systems if managed properly, a report claims. The report, written by Natasha Mortley, a research fellow at the University of West Indies in Jamaica, estimates it costs Caribbean governments US$ 35,000 to train a nurse – an investment that is lost when nurses leave to work abroad. However, the report argues that as many nurses eventually return to their original counties there can also be important gains as a result of migration.

“Nurses from St Lucia and Jamaica are leaving in unprecedented numbers, with both positive and negative impacts for the healthcare systems,” Dr Mortley claims. “By nurturing the positive, we can gain some compensation for the negative.” The preliminary study, based on interviews with 150 nurses from St Lucia, Jamaica and the UK, as well as 20 health officials, was delivered at last month’s Global Development Network conference.

Healthcare in the Caribbean relies heavily on nursing, with nurses responsible for delivering 70 per cent of direct patient care, according to the study.

The World Health Organization recommends a ratio of one nurse to every six patients, yet according to the report, in St Lucia this ratio might be as low as one nurse to every 20 patients. With such a high patient load, many nurses interviewed for the study said that they felt burnt out and had low morale. As the report states: “The loss of even a small number of health professionals can have major impacts, leading to further deterioration in the health system and Caribbean governments’ inability to meet the Millennium Development Goals.”

Jamaica had a 58.4 per cent nurse vacancy rate in 2005 and yet has one of the highest numbers of training institutions in the region, the study found. A lack of training opportunities is therefore not the problem. Instead nurses are choosing to work outside the Caribbean healthcare system once they are trained.

St Lucia’s minister of health told Dr Mortley in an interview: “If we were to talk about the impacts [of migration] on the healthcare system, I would say [it is] the depletion of human resources… On the service [aspect] … where the standard and quality of care [has been] compromised.”

However, despite these problems, the report claims that coping with shortages of staff actually led to “better planning in the health system and thus greater efficiency… in some areas” as well as “greater performance management”.

“There are many positive effects which exist in the long term, [such as] reciprocal flows in the form of money, resources… [and the] transfer of knowledge and skills,” says Dr Mortley.

Caribbean migration is not a one-time permanent move abroad, the study found. Many nurses do return home, and when they do, they filter their experiences, new skills and technology into the system, the report suggests.

“[Returning nurses have] helped build research capacity within in the health system [and] contributed to teaching theory and practice and policy options within public health education,” the study claims. “Whilst the decision to migrate is made by the individual,” the report found, “[nurses] are also tied to larger social units that influence their decisions and behaviours.”

To take advantage of the skills of returning nurses, the report recommends increasing the retirement age of nurses in the Caribbean. Meanwhile employing nurses from Cuba and Nigeria could help to fill vacancies, it suggests. In the longer term, strategies mooted include forging bilateral agreements with countries to ensure that nurses eventually rejoin the Caribbean healthcare system. Dr Mortley stresses the importance of including nurses in policy-making. “Nurses need to be part of the decision making process to ensure their voices are heard,” she concludes.

One suggestion is to use advertising campaigns in a manner similar to the recruitment drives of the British government shortly after the end of World War II. The report also suggests these networks could be used to relay information to Caribbean nurses in the UK about improvements in their home countries.

Title: Nurse Migration and its impact on the Caribbean healthcare systems: Special focus on St Lucia and Jamaica