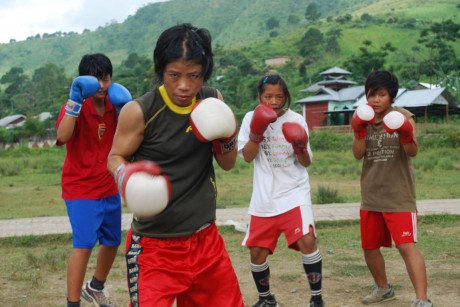 Manipur, a small state in the politically fragile north-east region of India, is often in the headlines for the recurrent tensions and conflicts among its many ethnic communities. Violence is part of daily life. Insurgent groups frequently clash with the Indian Army, and bombings, killings, abductions and extortion are common.

But for a few days conflicts were forgotten as the state came together to cheer on one woman.

Mangte Chungneijang Mary Kom – MC Mary Kom for short – a diminutive 29-year-old from a poor farming family had made it to the semi-final of the first ever women’s Olympic boxing tournament.

In doing so, Magnificent Mary, as she is known, did something that endless conflict resolution workshops have been unable to do: she unified the people of Manipur as a single entity, praying together and cheering together.

In the run-up to the quarter-final and semi-final bouts, prayer sessions were conducted by the Komrem Baptist Church (Mary belongs to the Komrem community which consists of six kindred ethnic groups). Grandmothers and teens alike prayed in their houses. Facebook, Twitter and other social media sites were alight with updates and wishes poured in on Mary Kom’s Facebook page.

The local radio aired people’s appeals to ensure an uninterrupted power supply to the state electricity department. This may seem odd, until you appreciate how poor the electricity supply is in Manipur. Power outages are common, with electricity being supplied for only three to four hours a day.

When the plea went unanswered, people flocked to the nearest house with generators or without a power blackout to watch the match.

In Mary’s native district, Churachandpur, angry locals tore down the electricity office for not supplying power during the semi-final.

The power outages are just one sign of a wider neglect of the tiny state by the rest of India.

Development and employment avenues are almost nil. Many Indians aren’t even aware that Manipur, tucked up next to the Myanmar border, 2400km from New Delhi, is part of India. 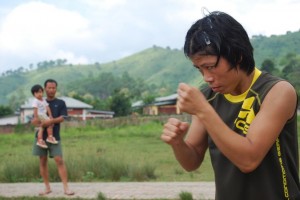 Mary Kom says she took up boxing in a bid to escape from poverty. For her and many other sports men and women in Manipur, sport has become a means to secure a job without having to dish out thousands of rupees in bribes to potential employers. There is very little, if any, formal funding for sport and many of the state’s athletes are employed by the Army, or the police force in Mary’s case, or by central public sector units and even the corporate sector.

So for Mary Kom getting to the Olympics was a major achievement in itself.

Mary was up against British boxer Nicola Adams, rated world number two behind Chinese boxer, Ren Cancan. Mary, herself, has won the amateur world championship five times in a row – but in 46kg and 48kg categories. To fight at the Olympics she had had to move up a weight category, as flyweight (51kg) is the lowest weight class at London 2012.

It was a tough fight – Adams is three inches taller and was fighting on home turf. Over the course of the four two-minute rounds she beat Mary 11-6, going on the following day to win the gold medal in the final.

But despite the disappointment of not winning gold, Twitter lit up with praise for Mary.

Amitabh Bachchan, arguably Bollywood’s biggest star, tweeted after the match: “My great honour and privilege to have spoken to Mary Kom earlier today on the phone. What a lady!! You have made all of India proud.”

Twitter user Namita Bhandara wrote: “This love for Mary is such a wonderful thing. Beyond politics, beyond region, beyond religion, something that can unite Indians.”

Prominent television journalist Barkha Dutt tweeted: “Mary Kom you shouldn’t be sorry. It is us who should be sorry for not giving you the love & facilities that was your due long ago.”

Mary wanted gold, fervently, but she also hoped that with each punch during the Games she would be putting Manipur on the map and helping to bring her state out of abject poverty.

And this she has achieved. With India’s media spotlight trained on her throughout the Olympics, culminating with her role as flag bearer for the Indian team at yesterday’s closing ceremony, some of that light has shone on Manipur as well.

People are now talking about the state, the problems in north-east India and the racism that many people in the region experience. 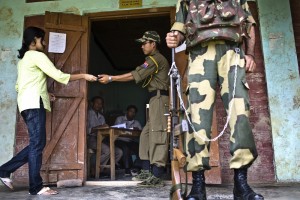 Barkha Dutt, again, tweeted: “Mary Kom brings Manipur to Mainstream Media. For that alone, she deserves a medal. Or four.”

Another Twitter user, writing under the name “Oculus”, wrote: “Mary Kom apologizes for not winning gold. A billion Indians yet to apologize for not knowing where Manipur is.”

Kunal Majumder, principal correspondent at Tehelka, an investigative political magazine, wrote: “Do we think of Manipur only when someone gets us a medal and an honour? Did we care when the state had economic blockade for months?”

I first met Mary in 2001. She was just 18 and had returned with a silver medal from the first Women’s World Cup Boxing Championship, held in Pennsylvania, USA. I was 26 and just starting out in my journalism career. I met her in a flat in Delhi. She was too shy to talk to the press, so we came to a compromise and ended up doing the interview in the small bedroom of the apartment, crowded with girls who had been helping out with tea and snacks at a small reception function a few minutes earlier.

A petite girl, just 5ft 2 inches, she kept giggling into a pillow at every question. But in the ring she transformed into a tigress.

I have met Mary several times over the years. She has been an inspiration to me and to other women in Manipur, carving out a career in a man’s world, following her passion, even when people said she should give it up after she married and again when she had twins. She has made many sacrifices and overcome many challenges to get that bronze medal.

To young girls and boys, the story of Mary Kom has served as an example that sports can make your dreams come true. 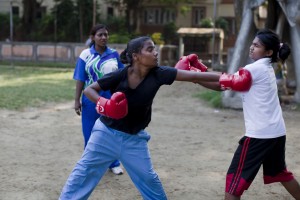 In Mary’s own non-profit boxing academy a number of young girls and boys have enrolled with the hope that they can box their way out of Manipur’s poverty and hopelessness.

There is a lot of sporting potential in the state. In the Indian Olympic team, five of the 81 members are from Manipur – a significant achievement when you consider that the state’s population of 2.3 million people comprises just 0.3 per cent of the total population of India.

Maybe now there will be more money spent on sports in the state, which would be a lasting legacy.

However, for all the excitement, what worries me is that in a few weeks time Manipur will be forgotten once more. We have many deep problems, rooted in conflict and poverty, that need to be addressed.

To term Mary’s achievement, or that of the scores of other Manipuri sports men and women who have brought laurels for India, as the antidote to all the poisons sweeping across the state would be a hasty conclusion. For Manipur has had its moments of glory many times in the past too, but after every lightning that blazes up the sky, our horizon remains overcast by underdevelopment, nepotism and conflict.