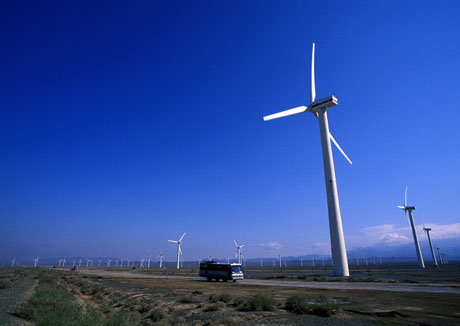 China | Windmills standing on the outskirts of Urumqi in the Xinjiang Province. President Hu Jintao recently stated that China would seek to produce 15 per cent of its energy from non-fossil fuels by 2020 / Chris Stowers - Panos pictures

There are plenty of voices ready to blame China for the perceived failure of the global climate change negotiations. But the development of China’s domestic policies in recent years shows it is serious about cutting emissions and funding alternative energy sources.

Huang Ming, for example, founded the Himin Solar Energy Group in 1995. The former petroleum institute researcher started from scratch, giving away solar water heaters for free. Now the group has developed into one of the world’s largest solar water heater manufacturers, with 200 million Chinese customers.

Global Village, an environmental NGO based in Beijing, launched its 26 Degree Air Conditioner Campaign for the conservation of energy in Beijing several years ago. The campaign sought to persuade the owners of hotels and other public buildings to maintain temperatures at 26 degrees Celsius. As a result the Chinese government has, since 2007, required that all public buildings set their air conditioning no lower than 26 Celsius in summer. Many companies and NGOs are now following the example of these trailblazers.

China has set itself the target of reducing energy consumption per unit of GDP by 20 per cent from 2006 to 2010. If it manages, it will avoid emitting 1.5 billion tons of greenhouse gases and will save 600 million tons of coal, an achievement unmatched by any other country. Before the Copenhagen conference China unveiled its national climate target and promised to cut carbon dioxide emissions per unit of GDP by 40 to 45 per cent on its 2005 level by 2020. It will also intensify efforts to improve energy efficiency, with President Hu Jintao saying China would seek to produce 15 per cent of its energy from non-fossil fuels by 2020.

It has already gone some way towards achieving this target. Between 2006 and 2009, China closed down many small coal-fired power plants and as a result avoided 124 million tons of CO2 emissions. It has accelerated the development of hydropower, nuclear, solar and wind power. China’s hydropower capacity is now the biggest in the world, capable of supplying 170 million families with electricity. Its wind power capacity is now the fourth highest in the world, able to provide electricity to 12 million families.

After Copenhagen ended without a binding agreement, China was accused by a few developed countries of hijacking the negotiation process to protect its economic interests. But Zou Ji Professor of Renmin University, and a member of China’s delegation to the UN climate change talks in Bali in 2007, disagrees with the critics: “With their weak reduction targets and slow progress in funding support and technology transfer, these developed countries are not in a position to blame China” he argues.

Moreover, Professor Zou Ji says China will pay a substantial price to reduce its carbon intensity, even though a substantial part of its emissions are produced in order to provide basic living needs. It will have to further modify its economic structure, for example, and shut down more small-scale coal-fired power plants and high energy-consuming factories, which will sacrifice many jobs. This already cost about 400,000 jobs from 2005 to 2009.

Despite the rapid social and economic improvement of recent years, China remains a developing country, well down the global ranking of per capita GDP, with uneven domestic development. Many people in rural areas live in poverty, and many in remote areas still lack electricity. The country still needs to develop and to eradicate poverty. Bearing this in mind, the Chinese government’s target to cut energy consumption by 20 per cent per unit of GDP is an impressive pledge. Su Wei of China’s National Development and Reform Commission says it won’t be easy, nevertheless China is likely to meet these targets.

The clock is ticking, and it is imperative to take action to curb climate change. Planet Earth is waiting for further action by all nations. China claims to be a responsible large developing nation, and it is on track to act decisively to mitigate the threat.

Sun Yu is a Chinese journalist working for Environmental Protection magazine in Bejing. She wrote this article thanks to a fellowship with the Climate Change Media Partnership – an initiative of the Panos Network, Internews and the International Institute for Environment and Development (IIED).