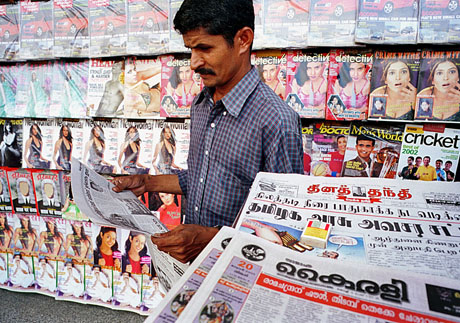 Manipur in north-east India has been caught in a vortex of several prolonged separatist movements for nearly six decades. This, together with the state’s military counter insurgency tactics and public protests over the violence, is what makes the news.  Headlines tell us about the arrests, the killings, the propaganda, and of course, the politics.

As a result my work as a journalist used to consist of reporting accidents and political killings, attending functions and writing about them, and once in a while interviewing that big shot or public figure. At that time it was satisfying with a capital S. As journalists we witness history being made. The job brings recognition from parties on both sides of the conflict, respect from function organisers, and neighbours thinking you always have the breaking news. It is a heady cocktail.

However, my euphoria didn’t last long. And when it went, work became a monotonous event with the occasional jumpstart. What helped me to reinvigorate my passion for journalism was not chasing bigger stories, but looking in more depth at issues which don’t often make the front page.  Instead of reporting “so and so has done this research”, I have learnt put a human face to the research or issue at hand, helping me to reach a wider audience.

Let me give you an example: HIV and AIDS is a major issue in Manipur, in fact it is one of the hardest-hit Indian states. Tuberculosis is also one of the region’s oldest inhabitants. However, it was only after I was encouraged to read up on research articles on HIV-TB co-infection that I understood the link between the two illnesses, and the ramifications for the general populace.

Realising this, while also understanding the workings of the patriarchal society of Manipur, I was motivated to write about Lata, a widowed woman with HIV-TB co-infection. An article detailing not only the HIV-TB co-infection but also gender issues, the burden of taking TB pills, and the DOTS campaign, was born. I doubt whether I could have written a similar story without using the research findings.

I have come to appreciate that academic research and journalism share a core thread of investigation and analysis, but also significant differences. Academic and scientific research is backed by prolonged and systematic investigation, and hence it has greater validity than journalistic works. However it tends to be confined within the university campus and the academic literati.

As a journalist, newsgathering and communicating the news to a larger readership is of prime importance. Yet most of the time, we fail to see the need or the importance of communicating research to the people through the media. I am sure most academics in Manipur have never thought about its importance and the possibilities on offer. In Manipur, other constraints including the socio-political situation, the media structure and the readership play an important role. In fact, I would say they play the most important role.

The state boasts a large number of media outlets. It has around 25 dailies and nine journals listed with the State Directorate of Information and Public Relations (DIPR). Most national and international media agencies have their correspondents based here.

However, almost all media houses in Manipur are small, private firms with low investment and a smaller number of workers. Some reportedly run with a skeletal staff of about four to ten people. The largest media firms like The Sangai Express, Poknapham and Hueiyen Lanpao employ a larger number of staff – from 20 to 30. Most of the journalists work for minimal wages, some salaries are as low as Rs.1000 (around US$20 to $22) a month.

Therefore, journalists have less time and inclination to spend time on a story no matter how important or beneficial it might be to the general public. Their main aim is to pack as many stories as possible into a day’s work. Many of the older generation of journalists drifted into the profession for want of proper employment opportunities or until better opportunities came their way.  It is a very recent phenomenon that people are coming into the field with the view to making a career out of it.

Apart from these local constraints, access to renowned and authentic academic research is often difficult, partly because of a lack of initiative on the part of journalists, and mainly due to ignorance about the kind of research activities being undertaken. This ignorance is also fuelled by the tendency of most researchers to circulate their work among their own kind and to write exclusively in academic language.

Getting access to good research journals like the medical journal The Lancet is hard as the subscription rate often translates into a huge amount in the local currency. Access to individual articles may be purchased for 24 hours on the internet at US$40. This is almost 2000 Indian rupees – perhaps twice a journalist’s monthly salary.

The Lancet provides free access to a limited number of articles after registration, but in order to find the site, you must navigate the maze of the internet, which takes time and money. And most journalists, being part of short-staffed media houses, tend to forego even that little patience for web-surfing.

In addition, even the local academics here in Manipur tend to give their work a low profile, perhaps for fear of competition. The few who come up with innovative and groundbreaking works usually prefer to get their works published in a national or international journal, and we simply don’t get to know about it. Most NGOs also tend to keep their research findings to themselves and use them for their own purposes.

What makes communicating research interesting, despite all these pitfalls, is the satisfaction of finding the right piece of work, then going hunting for the human character who can illustrate it in a manner that lay readers can identify with easily.