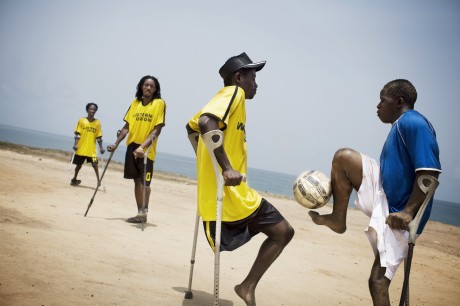 The Paralympics as we know it today has come a long way from its humble beginnings as a rehabilitation programme for wounded World War II soldiers.

Dr Lutwig Guttmann, a neurologist, used sports to restore a sense of hope and self-worth to British soliders with spinal injuries and in 1948 organised the International Wheelchair Games to coincide with the 1948 Olympics in London.

Sport is still used around the world today to rehabilitate people with disabilities.

In this photograph, amputee footballers practice on the beach in Freetown, Sierra Leone.

Football has been used in Sierra Leone and other African countries to reverse the negative perception of amputees, many of whom were victims of civil wars or land mines, and there are now Africa-wide and international amputee football tournaments.

In Sierra Leone armed rebels used amputation as a weapon of fear and intimidation in the country’s decade-long civil war. Some 27,000 Sierra Leoneans are estimated to have been disabled or have had one or more of their limbs amputated during the 1991-2002 civil war.

The World Amputee Football Federation hopes the sport will become a gold medal Paralympic event in the future.

Sport is used around the world today to rehabilitate people with disabilities. In this photograph, amputee footballers practice on the beach in Freetown, Sierra Leone.