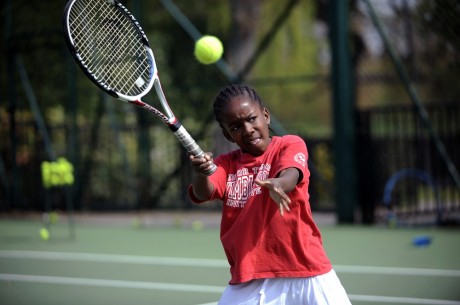 Anyone for tennis? A girl is coached at Wimbledon as part of community programmes to encourage more children to play the sport - Andrew Testa | Panos Pictures

A young girl frowns in concentration as she returns a ball during a training session with Dan Bloxham, head coach at Wimbledon. The All England Lawn Tennis Club, which stages the annual Wimbledon competition, runs community tennis programmes to give young people a chance to play the sport.

It is hoped that the success of London 2012 will leave a sporting legacy, inspiring children around the UK to take up rackets, bats and balls or have a go in the ring, the pool or on the track.

So far, the Games have ignited a debate over the provision of sports in UK schools. It is estimated that nearly a quarter of this year’s British athletes were educated at independent schools, whereas only 7 per cent of the general population attend fee-charging schools. More jarringly, 50 per cent of the medals in the Beijing Olympics were won by athletes with a private school education.

The head of the UK’s Olympic team, Lord Moynihan, has called for an overhaul of the school sports system and more funding in order to ensure a sports participation legacy.