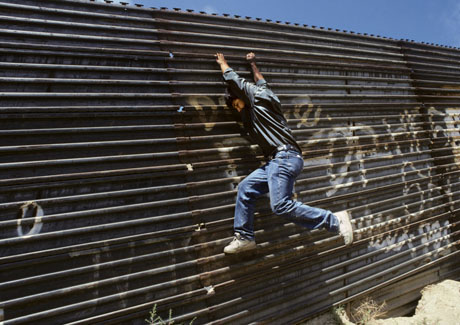 In the towns along the Mexico–USA border the TB prevalence rate is almost twice that of the Mexican national average because of moving populations, overcrowded conditions, non-adherence to treatment and stigma.

Arturo Romano, 32, crossed the border from Mexico into the United States illegally but never made it to his brother’s place, in Illinois, because he became ill with multidrug-resistant tuberculosis (MDR-TB). Now he is back in la Huasteca, the northern part of Veracruz, in Mexico.

“When I was in [the border town of] Nuevo Laredo I started coughing. I tried to control it with traditional mixtures which use ingredients like honey. I used to smoke a lot, so I thought that was the reason for the coughing. I didn’t know I had TB,” Romano said.

“I shared a house and crossed the border in a vehicle with eight other people. When I was in Texas, I started feeling very ill and began vomiting blood with every cough. So I went to a hospital. Finally I was sent back home, but cured,” he says.

Twice the rate of TB in border towns

In the border towns along the Mexico–USA border the TB prevalence rate is almost twice that of the Mexican national average. Compounding the situation is the fact that half of the cases are of the multidrug-resistant (MDR-TB) type generated by inadequate or incomplete treatment.

Every day one million people cross the border (legally and illegally). On the Mexican side, poor neighbourhoods mushroom year after year, created by those waiting to cross.

TB in Mexico has declined by 61 percent since 1981. The national incidence of TB is 16.3 per 100,000 people, however, this almost doubles to 30 per 100,000 in towns and cities bordering the US. The anomaly is also reflected in data from the US. The US Centres for Disease Control and Prevention reported 13,299 TB cases nationwide in 2007. TB cases along the Mexico–USA border increased significantly between 1993 and 2007.

On February 17, 2009, The Chicago Tribune reported that Mexican immigrants accounted for 18 percent of reported TB cases in Illinois, although they make up only six percent of the state’s population.

Tijuana, Nogales, Juarez, Reynosa and Nuevo Laredo are some of the worst affected towns along the Mexican border. The towns are also havens for drug dealing and violence. They also feature moving populations and increasing unemployment.

The Mexican social development ministry notes that it is the poorest Mexicans who live in the border towns. Some 60 percent do not have social security; 38 percent do not have any document showing their vaccination data; 54 percent attended only four years of elementary school and 10 percent have no identification.

“If you are poor and you go to the border you are not planning to stay. Even if you start coughing you normally wouldn’t think it’s TB. You just think of crossing because if you stay in a border city for more than a month you’ll lose all your money,” explains Romano, who crossed from Nuevo Laredo in Mexico to Laredo, Texas, in 2005.

“Many patients in the border towns don’t complete the treatment because they are moving and can’t spend six months curing themselves. In Mexico, the government provides free treatment but most of the patients on the Mexican side of the border don’t live permanently in the border towns and so do not complete treatment. Besides, we have to recognise that TB patients still suffer discrimination, and people with TB do not want to be identified,” says Eva Moya, TB division director of the US–Mexico Border Association.

At least forty percent of people with TB who cross the border report a previous TB episode and have received free treatment with isoniazid or estreptomicine, according to a study done by the University of Guadalajara. That means, when they get a second bout, it may not respond to a single drug, because they already harbour resistant microorganisms.

“It is true that in Mexico, TB incidence has declined in general terms. But mortality due to TB has not declined. TB drugs are available universally, but people do not adhere to treatment. Some because they are very far from a physician and others because they get the infection in areas along the border and do not stop for medical attention” says David Alberto Murillo, president of the NGO, Friends against AIDS.

“Patients need to walk two or three hours to get to any public health centre. The physician just can’t ensure they are going to stick to taking one pill during the first two months and three pills a week for the other four months,” adds Murillo.

The federal government reports that from January 2000 to June 2008, drug related violence caused 17,000 deaths but, in the same period, TB took the lives of 22,581 Mexicans. Multidrug-resistant TB is another challenge to reducing the number of people dying from TB.