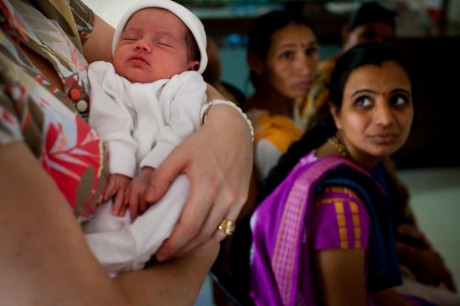 “Human beings have two main instincts: the instinct of self-protection and the instinct to reproduce,” says Dr Nayana Patel.

And she should know – she has carved out a career matching infertile couples with poor women willing to “rent their wombs”. Beginning with a couple of surrogacies a year in 2003, Dr Patel’s Akanksha Infertility Clinic in the west Indian state of Gujarat, now delivers around 110 surrogate babies a year.

Commercial surrogacy is highly controversial and banned in many countries across the world. 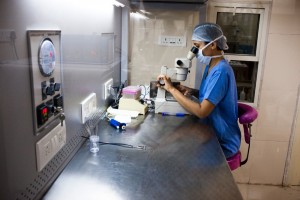 But in India, a socially conservative society, surrogacy has thrived since the Supreme High Court of India legalised the practice in 2002, with a report by the Confederation of Indian Industry estimating the industry will generate $2.3bn (1.5bn euros) annually by 2012.

Women’s rights advocates claim that in the absence of a clear law on surrogacy in India, the commercialisation of an unregulated sector has left room for unethical medical practices and the exploitation of both surrogates and infertile couples.

Partly due to pressure from campaigners, the Indian government set out a draft bill last year, which aims to limit the age of surrogate mothers to 35, imposes a maximum of five pregnancies – including their own children – and makes medical insurance mandatory.

Attempting to avoid messy legal battles that have occurred in the past, another proposal makes it compulsory for prospective parents prove that any infant born to a surrogate mother will have automatic citizenship in their home countries. The bill also aims to stop clinics sourcing, supplying and taking care of the surrogate mothers themselves.

However, for now, it’s business as usual at Akanksha Infertility Clinic.

It’s a little after 10 on a Wednesday morning as Dr Patel arrives at the clinic. Inside, there is a flurry of activity. Medical staff clad in light and navy blue run about, calling out names and carrying files. The lobby is full of women in brightly coloured saris, while others are in Western clothes. They are either desperately seeking a baby of their own or seeking to lift themselves out of poverty and offer their own children a better life.

One of the main attractions of surrogacy in India is the price.  Most of Dr Patel’s clients are from the US, Canada and Europe. Where it is legal, surrogacy in Western countries can cost 70,000 euros. At Dr Patel’s Akanksha Infertility Clinic, tucked down a narrow lane behind a chaotic market in Anand, it costs around a third of that.

For the surrogates, who get paid between 4,700 and 5,500 euros by the clinic, the money is worth several years’ income and is a fast track out of poverty. 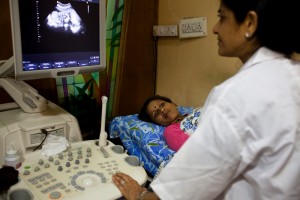 When 32-year-old Ranju Rajubhai’s husband sustained severe burns in an accident in 2007 and could no longer work, surrogacy was the answer to the couple’s problems. “I thought I’ll be doing a good deed, my work will also get done and [the couple] will also get a baby,” says Rajubhai who is due to give birth to a surrogate baby in a month. Like all the women signed on by Patel’s Akanksha Fertility Clinic, Rajubhai will get a minimum of around £4,000, equivalent to seven years of her husband’s salary. “I will get my husband’s surgery done [for his burns],” she says.

Rajubhai’s is a familiar story in the “surrogate house” where she lives with 39 other pregnant surrogates from similar backgrounds. Owned by Patel, the house is located ten minutes away from the clinic. With two to three iron-framed beds in each room, the house has the look and feel of a hospital ward. The surrogates, clad in loose, colourful gowns are sitting, lying, stretching, watching TV or chatting with each other. In one room, hangs a picture of a crawling toddler with the words: “The time to be happy is now.”

The majority of the women are second-time surrogates and deliver through Caesarean-section operations. “We have to cut our stomachs for money,” says Anjuman Pathan, a blunt 30-year-old surrogate. “It’s not a bad thing, is it?”

Pathan’s sharp remark offers a glimpse into the inner world of surrogates and the price they pay to fulfil their dreams of upward mobility. While Patel makes buy-in from spouses and immediate family a pre-requisite for surrogacy (something that the pending regulation will seek in enforce as well), almost all of them hide it from their communities and neighbourhoods fearing social ostracisation.

The time spent at the surrogate house creates a sense of sisterhood. They enjoy the rest and care they might not have had during their own pregnancies but are confined to the house for the entire duration of pregnancy. Their families are allowed to visit on Sundays but the surrogates are not allowed to leave the house premises except for regular medical check-ups or a family emergency. 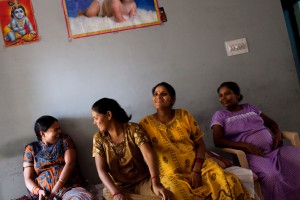 Shilpa Ben Praveenbhai Maikwan, 28, (2nd from left) is carrying a baby for her clients from Delhi, India. "we do this because our children will not lead a life such as ours, we want a better life for them." - Suzanne Lee | Panos London

“When I used to visit, I would just see the surrogates lying around all day,” says Kantibhai Motibhai, the husband of two-time surrogate, Shardaben. “They count the days to go back home. [But] I guess it works well. Our main interest was in the money. Their main interest is in the baby.” Sharda’s two surrogacies have allowed the couple to lease farmland and earn income from cultivation, buy buffaloes, whose milk they sell, buy a motorbike, invest in their children’s education and open up a bank account for savings.  As second-time surrogate from Nepal, Diksha Gurunga, puts it, “You have to lose something to gain something and what we gain is a lot more than what we lose.”

The worlds inhabited by surrogates and those seeking surrogacy are vastly different but the compulsions that lead them to the clinic are not. “I would go and pick up a baby on the street,” says 38-year-old Jennifer, a tall American blonde with a model-esque figure who has had five failed pregnancies. “That’s the kind of desperation that comes with infertility.”

Slender-framed with green eyes and short-cropped blonde hair, 38-year-old Robyn Wright runs a small beauty salon in Wilson, Wyoming. She has a 14-year-old daughter from her first marriage but a haemorrhage after the birth led to a hysterectomy. When she met Jason, a guide at Yellowstone National Park, the couple wanted their own biological child. The Wrights candidly admit they “weren’t born rich” and don’t “live on credit”. Realising surrogacy in the US was financially impossible, the Wrights staked all their savings and travelled half way across the globe to fulfil their dream. 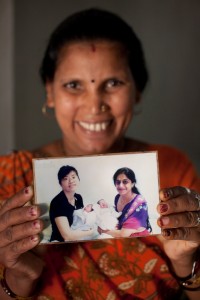 Dr Patel says laws governing surrogacy in the US, for example, are weighted too much in favour of the surrogate mother.

“There are so many cases where you are the genetic parent and [the surrogate mother] is blackmailing you. She will not give you the baby … If you don’t pay, you’re not allowed to see the baby. Couples from abroad write to us saying that the legal liabilities are so much in the US, that after paying so much money also, I don’t know if I’m going to hold my baby or not and that is what India has taken care of.”

She says she’s in favour of regulation in India but that ultimately it depends on the ethics of the people involved, not any law.

“See sex determination. It’s rampant in India but it’s illegal. So whatever you do, there’s going to be unethical behaviour. It’s the ethics of the couple, surrogate and doctor, which counts … The laws, even if they are there or not there, it hardly matters. So, I’m in favour yes, but ultimately it’s the people involved which makes it unethical. No amount of laws or supervision can make a procedure ethical.”

Back at Patel’s clinic, three women who have each travelled from North America hoping to find a surrogate mother to bear them a baby are gushing over a newborn European baby recently born to one of the surrogates at the clinic – proof that their dreams could also come true. “There’s no perfect system, but given what we have and under the circumstances, Dr. Patel’s clinic definitely helps create miracles,” says Fatima, a Canadian.