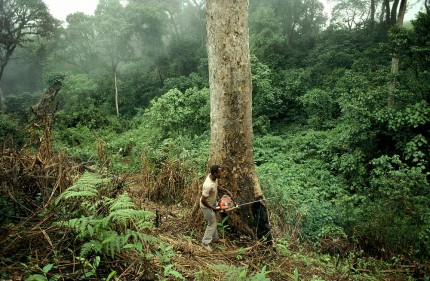 Nigeria, once at the heart of the tropical rainforest belt, has lost around 95 per cent of its forest cover and now imports 75 per cent of its timber. But an initiative – which calls on people living around the forest to repair the damage – is underway.

With his gaze fixed on a row of pale tree seedlings struggling to sprout, Nelson Egho cuts the figure of a concerned man. He planted the seedlings in the hope that they would grow into trees in what was formerly a thick forest reserve. Now the Urhonigbe Forest Reserve in the Niger Delta is all but barren grassland.

Like other trees that once had their roots here, and have since been cut down for firewood, logs and land, Egho’s saplings are threatened by a host of factors which he is fighting to keep at bay.

“For the past two weeks now we have been trying to clear the lines in which we planted tree seedlings, but due to a fire that gutted the area last time, we needed to replace the seedlings that were burnt,” he says, a drop of sweat running down his face.

Egho’s challenge is similar to that encountered by the other interest groups, saddled with the unenviable task of protecting what remains of Urhonigbe Forest Reserve, and restoring the sections that have been wiped out.

According to the Nigeria Conservation Foundation, the forest provided habitat for at least 11 types of mammals and 41 varieties of bird species before it was cut down between the early 1920s and 2006 when action began to stop its obliteration.

Chris Ameh, a site officer at the reserve notes that the forest was so dense and rich that it was classified as a strictly protected nature reserve by the United Nations.

“Right now, the place has been badly deforested,” he said, “and it has been taken over by spear [grass] and elephant grasses. I think the people [whose activities degraded the forest] saw the danger that was coming, and decided to halt.”

Ameh lamented that some efforts being made at regeneration were being thwarted by annual bush burning, previously caused by cattle Fulani herdsmen but now largely caused by local farmers, and rodent hunters, whose destructive nocturnal activities are hard to check.

“They leave the place with fire, and it razes what we have planted, it is very frustrating,” he said.

On the whole, conservationists have identified deforestation, uncontrolled subsistence farming, illegal hunting, wildfires and over grazing as some of factors that have undermined efforts being made to regenerate the reserve.

All this notwithstanding, a Biodiversity Action Plan (BAP) is being vigorously implemented to save the forest. Funded by the Shell Petroleum Development Company (SPDC), the BAP is being touted as the means by which an efficient and sustainable management of natural resources on offer can be carried out.

For Professor Emmanuel Obot, Executive Director of the Nigeria Conservation Foundation (NCF), who advocates a bottom-up approach to environmental management, making the local people the centrepiece of the efforts to save and regenerate the Urhonigbe reserve, is crucial.

“We are hoping that the traditional rulers there will provide an enabling environment, while the communities manage the resources there. It is not an NCF or a Shell thing; it is a community-based action by which we are trying to demonstrate that it is possible.”

Recently, Edo State became the first among the 36 states of the Nigerian federation to pass a biodiversity law. This novel piece of legislation, as far as Nigeria is concerned, has provided legal backing for the work being done to protect biodiversity in Urhonigbe.

Michael Uwagbae, who hails from one of the communities around the forest, is the Biodiversity Action Plan Project Manager at the reserve. He says on the strength of the biodiversity law, poachers and other elements carrying out illegal and damaging activities in the reserve are being checked, and brought to book.

“The project has made an impact in the sense that it has brought about the ownership of the forest to communities. It has made communities know that the forest belongs to them, and they should manage it themselves; that alone has really made it unique.”

They are also exploring options to create alternative livelihoods for members of the communities. “We are still on a learning process. The result has been mixed because some say it doesn’t work, while others give it a try. I think the alternative means of livelihood has worked to a large extent. It has taken some people off the forests, and it has made them realise that they can actually take their eyes off it by doing others things like fishing and animal husbandry to generate income.”

These measures notwithstanding, the demand for bush meat from forest animals has proved extremely difficult to combat. A restaurant owner in the area says although she and her customers miss the ‘real bush meat’ from the forest, which is tastier than that from animal husbandry, everyone is trying to cope.

A traditional ruler in the community, the Enogie n Ugo- Niyekorhuawon, E.O Ogiugo, who also reiterated his people’s undying love for bush meat, explained that he believed that gradually, the message of sustainable management of the forests would catch on.

The original article was posted to climatemediapartnership.org