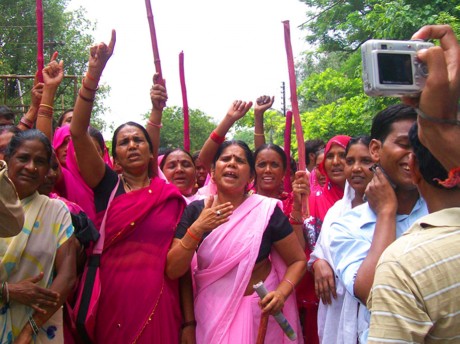 Hoisting her lathi (bamboo stick) high in the air and pulling her pink sari tightly around her, Sampat Pal Devi negotiates the potholed road which leads to the office of the Superintendent of Police of Banda district. She raises her voice to sing in her native Bundeli: “Jam karo milkarke, soshan ka pahiyya…duston se ladne ko ek ho ja bhaiyya – In order to stop the wheel of injustice, Let us get together to fight the evil people responsible.”

Surrounded by a group of women, each clad in varying shades of pink, Sampat Pal is seeking justice for Parvati, a 14-year-old girl from a poor and socially backward caste. Parvati is said to have been raped by a boy from the same district and is now pregnant. The boy is in hiding and the women want the police to find him.

Sampat Pal has become an unlikely heroine to tens of thousands of poor women across India as the leader of the Gulabi Gang (“gulabi”, meaning pink in Hindi, refers to the colour of their saris). Born in 1958, the daughter of a poor shepherd, Sampat Pal taught herself to read and write from her brothers’ school books as she wasn’t allowed to go to school herself. Aged 12 she was married off to a local ice-cream vendor. By 20 she had had five children. 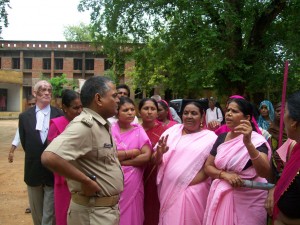 The catalyst for forming the group occurred when Sampat Pal witnessed a woman being beaten by her husband. She asked the man to stop but he turned on her. So Sampat Pal returned the next day with five other women and a bamboo stick – and gave him a beating just as he had beaten his wife. Her fame spread from there and she officially formed the gang in 2006.

Moving from village to village in the Bundelkhand region of Uttar Pradesh, singing songs of rebellion and protest, Sampat Pal urges women to take direct action against corruption, sexism and inequality.

Five years on, she claims to have 200,000 supporters in Uttar Pradesh (UP), India’s most populous state. The Gulabi Gang now has branches in the neighbouring states of Haryana and Bihar which are run by “district commanders” under Sampat Pal’s leadership.

“The problems of the marginalised sections of society, which we routinely take up, are not singular to Uttar Pradesh in any way,” Sampat explains. “The same issues of dalits, domestic violence, child marriage, sexual assault on women, dowry and land issues occur every day all over the country.

“Our resolve is to make sure that each district has a crusader who can take up the issues of the poor and get their voices heard.”

Bundelkhand is a brutal place to live. Desolate and arid, this is a region where people still die of starvation and bandits are rife in the countryside. Crimes against women are common, the caste system, while officially illegal, remains ingrained and the state’s own official website describes UP’s female literacy levels as “dismal” (almost 60 per cent of women are illiterate, according to the 2001 census). 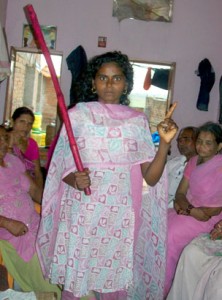 Take Neelam, 19, who belongs to one of the lowest castes. One day when her parents were working in the fields a higher caste boy barged into her home and tried to rape her.

“I fought back with a sickle and the boy got hurt and ran away,” she recalls. However, because he belonged to a higher caste her parents would not contact the police. “That night I ran away and came to seek help from Sampat Pal, who lives near my home,” she says.  She has been living with the Pals for a month, while the Gulabi Gang works to get the police to take up her case.

Hemlata Patel is the district commander of a Gulabi Gang in Fatehpur district in Uttar Pradesh, where she has about 10,000 members.

“Our day begins with a long queue of people waiting outside our homes, seeking our help in some matter or the other,” she says. “My work begins with listening to their problems and then asking the other side for their version before trying to sort it out. We first try to get the matter amicable solved but when that does not happen, we seek the help of the authorities.”

“Matters of domestic violence and atrocities against women based on the caste system are the most common, though now we also get problems related to land issues as well as corruption in government welfare schemes.”

When the gang first formed, Sampat Pal and her members were known to use force to get what they wanted, threatening the police and government officials and in some cases even assaulting them with lathis. But they say this has changed – and the local police agree. Banda’s Assistant Superintendent of Police, Rajendra Prasad Pandey, says: “We feel that the gang is doing some good work and in a way helping us solve many issues. With their help, we are able to crack many cases much more easily and faster. And the fact that they are acting as a vigilante group, at times forces us to be on our toes to get a job done.” 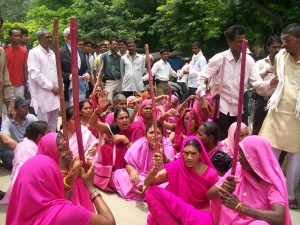 Sampat Pal’s main fight is now against female illiteracy. “People, especially those belonging to the extremely poor and marginalised castes, do not educate their girls. For most, sending girls to a school is a problem of affordability.”

While the boys are sent to schools, the girls are expected to either help in the fields or at home, doing household chores like cooking, working in fields, grazing cattle, collecting water.

“Unless we start sending our girls to schools, we will continue having this problem,” she says, promptly breaking into another song she has written in Bundeli, in which she implores mothers to educate their daughters.

“My husband has learnt English but I only know Hindi. One day he asked for water but I got him tomatoes. He slashed me with his belt… So, says Sampat to all her sisters, give your girls education, my friend. Otherwise there will be great difficulty.”

“I want the women to come out and revolt against superstitious beliefs and stereotyped lives,” she adds. “For that, education is a must.”

“Villagers who used to earlier send their girls to the fields have now realised that education is important and have started sending them to school. This year the number of girl students in my school is expected to increase and it seems that we have finally succeeded in breaking the ice.

“Now there is no worry,” she says, before breaking into another uplifting song:

You can take action today, as 16 days of activism begins to stop global violence against women. You can write for the Guardian about how change can be brought about in developing countries.