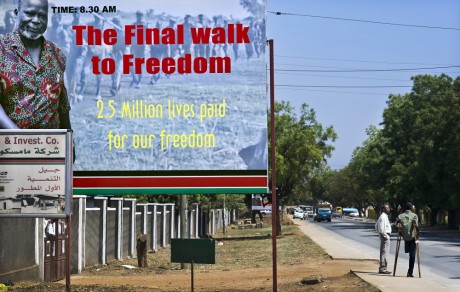 Citizens of the Republic of South Sudan will celebrate the birth of a new nation on July 9, 2011 / Sven Torfinn - Panos Pictures

Juba, the capital city of the world’s newest nation, the Republic of South Sudan, has spent the months leading to its independence celebrations undergoing a $60m facelift.

Flowers have been planted along the main streets and celebratory banners hang across the city. Previously, the only decoration in this dusty town of ramshackle huts and shacks came from trees whose trunks were painted a fading white, in contrast to green leaves, to represent the colours of the South’s army, the Sudanese People’s Liberation Army, (SPLA).

Juba airport is being expanded. The old airport, manned by air traffic controllers from Khartoum, had no safety lights on its runway and never operated beyond 6pm for security reasons. By contrast a new structure has been flung up to welcome VIP guests flying in for tomorrow’s independence ceremony.

A clocktower, stationed in downtown Juba, acts as a stop watch, counting down the hours, minutes and seconds to independence, while the streets are being sprayed with water daily to keep the billowing dust at bay.

For months the military band has been heard practicing for the ceremony. Sitting under trees, along a big open field, the saxophonist would practice his tunes while the drummers played on the other side of the field.

In the last few weeks potholes have been fixed, trees trimmed, streets swept and fences painted. The streets have been cleared, and the local motorbike taxis, or boda-bodas, banned, so VVIP convoys can speed their way through the town.

To many Southerners, independence day will be the climax of the 2005 signed pact between the North and South that ended a civil war which killed about two million people within a span of 21 years. 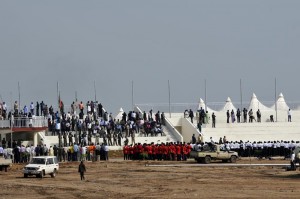 Few would dispute the fact that Juba needed a make-over. The war-damaged city of tin-shack housing and dirt roads was left in ruins by decades of fighting.

However, some argue the money could have been better spent.

Peter Abdelrahman Sule, the chairman of the Opposition party, United Democratic Front (UDF), says a lot of fears remain over South Sudan’s future and its capacity to govern itself.

“I am worried that we are beginning on a wrong footing with all this tribalism, nepotism and greed. People want to amass wealth quickly yet we have extremely poor people who are the majority in this region,” he said.

“When you see almost every government official driving fuel guzzlers I can tell you something is wrong with our leadership. We are forgetting that we have poor people in the rural areas who do not even have food. We lack basic health infrastructure, we lack schools and even clean drinking water.”

There is a growing division of wealth in Juba, with two distinct groups of people: a rich elite and the majority who are extremely poor.

Rich families live in the better hotels, such as Sahara Resort and Juba Bridge, which charge up to $800 a night. The rich are mainly the returning Sudanese Diaspora, who fled during the war and have made money abroad. Others are investors and employees of high profile civil society organisations.

They own top of the range 4×4 vehicles, fly out of town every weekend and send their children to international schools abroad.

For the rest, life is very different. Food prices have doubled since January this year and almost non-existent infrastructure and decades of war have made Juba one of the most expensive cities in the world. In the market two or three tomatoes can be as much as $1 while a kilogram of beef costs $10.

Elderly people line the streets to beg and homeless families scavenge for food in rubbish dumps.

As part of the beautification process, in March the government bulldozed hundreds of shacks in informal settlements, which doubled as markets and homes. The demolitions left hundreds of families homeless and angry.

Lam Machuor, 51, lived in a hut in the city’s Hai Neem district, an up-market area which hosts embassies, hotels and international non-governmental organisations.

He now lives across the River Nile, in a rapidly-spreading slum, 5km south of the city. Out of sight of the visiting dignitaries, it hosts more than 50,000 tukuls (grass thatched huts). Machuor’s house is a patchwork of old sacks, plastic sheeting and cardboard.

“I brought up all my children there [Hai Neem] and they called it home. Today I live in this shameful place with all my six children. Some have to sleep with their friends during this rainy season. If it were during the dry spell, we could have all just slept outside,” Machuor said with anger vividly written on his face. 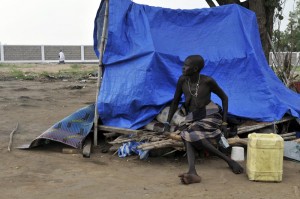 Hundreds of families were made homeless after the government bulldozed shacks in informal areas of Juba / J.B. Russell - Panos Pictures

John Ladu, 24, a casual worker at a mineral water processing factory, lived in Juba’s Hai Cinema district, before his home was demolished.

“Nobody is providing alternative places for the displaced to live,” he said. “Is this what we call self governance?”

A father of one, Ladu now lives with one of his uncles along Juba’s main street, known as Parliament Road. His uncle’s compound – three huts all made of bamboo sticks – survived the demolition as he is a high ranking military officer in the Sudanese People’s Liberation Army (SPLA).

“Juba is a young town and unless we control its development plans, we might end up with slum city,” he said. “Our main intention here is to ensure there are proper ways of doing things. We cannot just allow everyone to put up a structure wherever he likes, we must have an order of doing things.”

Juba is now braced for a flood of foreign money – a mixture of aid, from overseas governments and NGOs, and foreign investment.

Some of the poor have been able to find work thanks to the current building boom, which has seen the construction of Juba’s first supermarket, the presidential palace and major banks and hotels. Stone-breakers can earn up to $35 dollars on a good day, supplying stone to the construction industry.

However, for now the residents of Juba are gearing up for a long-awaited party.

Petterik Wiggers, a Panos Pictures photographer based in Ethiopia, is in Juba to photograph the celebrations. A frequent visitor to South Sudan, he said: “There’s excitement on the streets. In the popular neighbourhoods the talk of the day is what to do and where to party. At least half of the cars carry some kind of national flag. The big pick-up trucks especially have huge flags planted at the backs to send out a clear message: independence.”

Once the party is over Juba’s residents will face the challenges that lie ahead.

(With additional reporting by Lilly Peel)