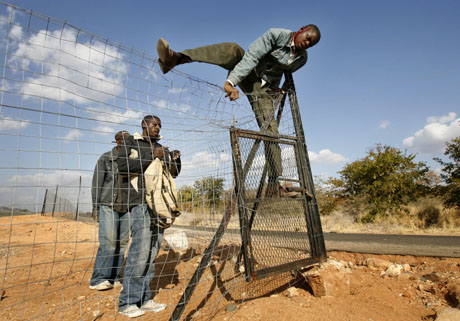 Pilani Mtshali and two others cross the border moments after being attacked by amagumaguma bandits, who pray on refugees crossing the border into South Africa / James Oatway - Panos pics

Tight security on the border between South Africa and Zimbabwe is encouraging human smuggling and fuelling corrupt practices amongst border officials, leading researchers to call for measures to make it easier to apply for asylum.

The humanitarian crisis in Zimbabwe has prompted a surge in the number of Zimbabweans entering South Africa, mainly through unofficial channels. This led to a spate of violent xenophobic attacks in South Africa in May 2008, triggering public outcry for tighter border control. However, the report, published this month in the Forced Migration Review, found that rather than suppressing illegal entry, more stringent controls lead to an increase in human smuggling, exposing migrants to violence and extortion.

“There is a widely held belief that undocumented migrants are illegal ‘border-hoppers’ with no bona-fide claim to enter South Africa,” says the report’s author, Tesfalem Araia, a researcher in the Forced Migration Studies Programme (FMSP) at the University of Witwatersrand in South Africa. “But the findings in this report show that many informal border crossers are in fact asylum seekers with seemingly bona-fide claims, or individuals who could claim asylum if they were more informed about refugee policy in South Africa and less intimidated by South African border control practices.”

Researchers surveyed 1,016 asylum seekers over a year between August 2007 and August 2008, identifying those who had crossed the border unofficially, and conducted more than 100 interviews.

They found people were turning to smugglers because of fear of deportation and arrest by police patrolling the border, a lack of information about South Africa’s asylum policies, corruption among border guards and rumours spread by the gangs of smugglers about the difficulties and dangers of crossing the border.

Order at the border

Effective policing has also inadvertently created close ties between a small group of corrupt border guards and the smugglers. Some guards allegedly regularly accept bribes to provide access to gates and fences, allow informal immigrants through the border, alert smugglers to patrols and surveillance and protect smugglers from arrest and prosecution. One smuggler told researchers, “I am the border, I can do whatever I like, and you just have to bring money.”

More than two thirds of migrants were unaware that they can seek asylum at the border. “It’s not surprising that smugglers exploit these levels of ignorance to take advantage of and spread misinformation to individuals,” says Tamlyn Monson, a researcher within the FMSP’s Migrant Rights Monitoring Project.

Section 23 permits (which allow individuals two weeks to report to a refugee reception office and apply for asylum) are free at the border. However, the report found that border guards have refused to hand over the permits, especially to Zimbabweans, while some smugglers charge migrants for the free permits.

The paper found that almost one fifth of those smuggled over the border were harmed in some way. The report contains harrowing first-hand accounts of abandonment, physical abuse, extortion and rape by smugglers. One 18-year-old Zimbabwean girl became pregnant after being repeatedly raped when she couldn’t meet a smuggler’s demands for more money.

The paper recommends increasing awareness of asylum protocol through adverts in the border towns of Bietbridge and Mesina as well as making legal routes of entry more accessible. “The real problem with undocumented migration is that it is invisible to the state and its effects cannot be managed,” says Tamlyn Monson.

Since the report was first published in March this year the South African government has introduced a 90-day visa-free stay for Zimbabweans. The government is expected to move towards a system of temporary protection permits. “This is a move in the right direction,” says Tamlyn Monson, “even though it doesn’t meet with our recommendation of making it easier to apply for asylum.”