You are here: Home » Blogs & features » Print features » Stuck between the middleman and the recession

Stuck between the middleman and the recession 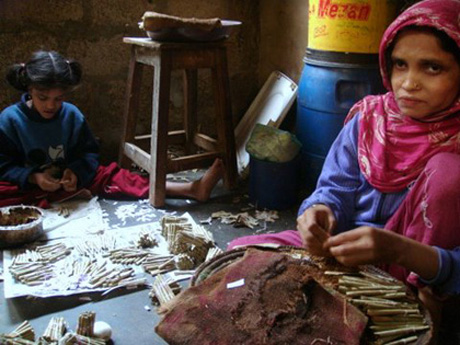 Amna Shakoor rolls bidis with her daughter in Karachi, Pakistan. Thanks to the global recession they are being forced to work longer hours for less money / Zofeen T. Ebrahim - Panos London

In Karachi, Pakistan, informal workers, particularly women, have been hit hard by the global financial recession and rising costs of fuel and food. Zofeen T. Ebrahim talks to women affected by the increased workload and talks to those who are trying to improve their conditions by organising home-workers.

But for the time being there is little chance of that for the 45-year-old mother of 12. Amna, who says she didn’t think about contraception as she considers it “un-Islamic”, lives in a two-room rented home in Orangi, Karachi, with her children and husband.

The main room is filled with children of all ages and sizes; two of them cry incessantly. A parrot peers curiously from its cage but decides to remain quiet amid the clamour. A clothesline is strung behind the spot where Amna sits, an assortment of clothes folded neatly across it. Two of her daughters are standing outside, watching the commotion from the window. A mound of tobacco and a pile of leaves are stacked on the other side of the room, waiting to be used.

This room is also Amna’s workplace.

It is here that she makes biri – traditional hand-made cigarettes, rolled in a leaf and tied with coloured thread, which are smoked across South Asia. Amna is one of Pakistan’s 8.52 million home-based workers. Around 60 per cent of the country’s female workforce is home-based, according to official figures, although NGOs say it is closer to 80 per cent.

A matter of survival

Biri-rolling is one of a wide spectrum of cottage industries in Pakistan, along with making incense sticks and matches, decorating bangles, embroidering shawls and dresses and stitching jute bags. All are typically carried out by women from their homes.

Together with her daughters, Amna rolls between 2,000 and 3,000 biris a week. For every thousand she gets Rs 80 (a little under US$1), which helps her supplement her husband’s income. As a labourer on construction sites he brings in around Rs 500 on a good day.

All of Amna’s daughters help her roll the biris, even her youngest daughter, who is seven. “We don’t have a choice,” says 17-year old Khurshida, Amna’s eldest daughter. “It’s a matter of survival. If we don’t help our mother, we don’t eat, it’s a simple formula.”

Without looking up, Amna, her parched lips stained red from chewing paan (betel leaf sometimes filled with tobacco), deftly rolls a biri, then tucks in the sides and secures the ends with a thread.

“It’s hard feeding so many mouths,” she says. “There seems to be a hole in my pocket. However much and however long we work, there never seems to be enough.”

As if working conditions were not harsh enough already, the global economic downturn has pushed informal sector workers further into the vortex of longer hours, ill-health, low wages and greater job insecurity.

Life has certainly become tougher for Amna and her family. As a result of the global economic crisis, her family has seen food and fuel prices rise and inflation soar, rising to an all-time high of 24 per cent in July 2008, compared with 7.7 per cent the year before.

According to a recent report by Women in Informal Employment: Globalizing and Organiz¬ing (WIEGO), the global recession has made life harder for many informal workers.

The study, No Cushion to Fall Back On: The Global Economic Crisis and Informal Workers, claims in times of recession the informal economy faces added strains. “When formal labour markets constrict, retrenched workers often turn to the informal economy…” the report claims. “This is particularly true in developing countries, where there is often a paucity of public services or programmes to support the unemployed.”

Asad Sayeed, a Karachi-based economist, says national and international economic developments have a direct effect on the poor.

“Exports are down and local demand is slow. As such, work is hard to come by. In the face of high inflation, their wages have not increased commensurately and therefore their real incomes have declined considerably,” he explains. “When times are tight, the middleman takes a larger share of the cut and squeezes their wages further.”

In Amna’s case the middleman sells on her biris for considerably more than he pays her.

In Orangi a packet of around 25 biris sells for Rs 12, according to Mohammad Rafiq, president of the Hosiery Garments Textile Workers General Union, Sindh.

“If I calculate the packaging, I think the manufacturer easily makes around Rs 4 per packet,” he adds.

The middleman is an ubiquitous figure in Pakistan’s cottage industries. Typically, large manufacturers contract out the middleman who then gets the work done by individuals in their homes on a piece rate system.

Women like Amna are unable to demand better deals from middlemen because home-based workers remain an invisible, unrecognised workforce. And because they are scattered, they have no unions or representation.

Ume-Laila Azhar, national coordinator of HomeNet, Pakistan, part of a network of organisations working for the recognition of labour rights of home-based workers, says that over the years the informal sector has gained greater significance as “a major source of employment and livelihood for people, especially women”.

However, she explains that work carried out from home is often equated with the parallel or “black” market and is therefore looked on pejoratively by society. As a result, public policy towards the informal sector is as ambivalent as it is contradictory, she says, “usually oscillating between benign neglect to periodic harassment.”

This is where organisations like the Labour Education Foundation (LEF), a Karachi-based NGO (LEF), step in. LEF aims to empower workers to protect their social, economic and political rights.

Zehra Khan, LEF coordinator, explains that because home-workers do not come under the definition of a worker in Pakistan’s labour laws, they cannot go to labour courts, nor are they eligible for state benefits such as old age pensions.

“These women don’t even know who their boss is, nor do they have any written contract to prove their relationship with their employer,” she adds.

NGOs like LEF are currently working with the government to draft a national policy on home-based work.

Zehra Khan is also general secretary of the Home Based Women Workers Association (HBWWA), which was formed one year ago and already has 4,000 registered members from the provinces of Sindh and Balochistan. Every two weeks HBWWA holds a meeting at the LEF centre in Godhra Colony, Karachi, where women home-based workers can take part in a discussion.

One of the women at the meeting, Shamim Bano, earns around Rs 100 (US$1.18) a day trimming threads from the back of embroidered material. She has been doing the same job for ten years. Until last year Shamim and her husband, who makes samosas (a deep-fried snack), were able to pay their bills and send their children to school.

“In the last year it has become increasingly difficult to even provide three square meals,” she explains. “All my four children were going to school but last year I had to pull out my 14-year old son from school and put him to work as an apprentice at a tailoring shop. It was either that or going hungry.”

Fifty-year old Zahida Mumtaz, whose husband suffers from a failing kidney and therefore has no permanent job, is aware that the Rs 20 to Rs 50 she gets for sewing a dozen girl’s dresses is a paltry sum. But there is nothing she can do about it.

“I know I’m getting very little because the same dress is sold for Rs 200 by the factory to the retail shop,” she says. “I saw the label myself just before it was being packed and sent off.”

However, she and her two daughters continue to sew around four dozen frocks a week between them, sometimes till the early hours of the morning as work can arrive at any time on their doorstep. “If we refuse or complain about low rates, the contractor will take the order elsewhere,” she says.

Safia Inayat, 60, a mother of eight, agrees. “There are so many women waiting just to grab that order we dare not say no to work.”

Hanifa Sattar, with five kids admits she has had to cut down on groceries. “I have rationed tea, milk is used sparingly and there is no question of eating meat or vegetables… It’s just lentils but even those have become so expensive,” she says.

“We know about our rights as women”

“We work so hard, even longer than before, and then we do housework too. So why are we paid a pittance?” asks Zahida. “Just because we don’t go to factories, does not mean our work does not count”

It is these sorts of questions that these women have begun asking since attending the HBWWA meetings.

“If you had met us a year back you would not have seen us talking like this,” says Shamim. “We wouldn’t have been able to articulate our problems like this. We now know about our rights as women.”

“It may be late for us, but we will ensure our daughters don’t go through the same fate and that too wordlessly,” says Hanifa.

However, back at Amna’s home, seeing her seven-year old pony-tailed daughter rolling bidis, or watching Khurshida carrying one of her young brothers on her hip, it is hard to imagine their lives will be any different from their mother’s.