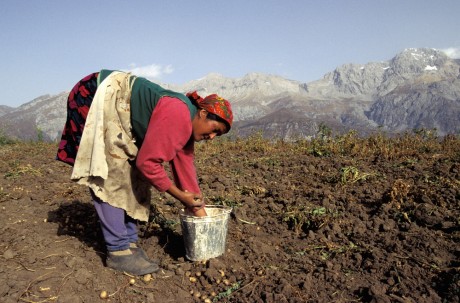 From next month, five hospitals in remote mountainous provinces of Kyrgyzstan will start using solar panels to transform the sun’s rays into clean energy and hot water.

It is the first time solar energy is to be used to power rural hospitals in Kyrgyzstan. Nearly all – 94 per cent – of the territory of this tiny Central Asian country lies in the mountains, making it hard to access. And because its old infrastructure dates back to Soviet times, many Kyrgyz kishlaks, or villages, suffer from regular disruptions to their power and water supplies.

Yet with more than 300 sunny days a year, Kyrgyzstan is in a perfect position to harness solar energy.

The pilot project is sponsored by the German Ministry for the Environment, Nature Conservation and Nuclear Safety (BMU) and implemented by the World Health Organisation. It is part of a programme called “Protecting health from climate change” which covers seven countries in Southeast Europe and Central Asia.

Artur Buyuklyanov, a former doctor and presently the WHO’s national officer in Kyrgyzstan. Attending last month’s UNFCCC talks in Bonn, he explained the difference solar power will make in these remote hospitals.

“Lack of hot water is a big problem for many hospitals in our villages. To wash themselves, patients often have to heat water in a kettle,” he said. “You can imagine that a kettle of water is not enough and, say, for a woman who has just confined (given birth), it is a hard task to do. The solar panels, which we are going to install on the hospital roof, will enable constant access to hot water.”

“Sometimes during operations the lights switch off. Doctors have to use candles and flashlights. It is difficult to keep vaccines and other medicine in the hospitals. Now, thanks to the solar panels, hospitals will be independent of unstable central electricity.”

“We want to show how effective it is to use renewable energy technologies in the hospitals,” he said. “We hope that similar initiatives will arise not only in Kyrgyzstan but also in other Central Asian countries.”

In fact, building on WHO research, a new UNDP project has recently been launched to provide an additional 20 Kyrgyz hospital with solar power panels.

Mars Amanaliev, who heads the official Kyrgyz delegation to the U.N. climate talks, is also head of the Climate and Ozone Coordination Centre in Kyrgyzstan. He’s got used to the slow pace of the negotiations but feels it’s a pity the processes have become so complicated.

He starts to count up the numerous meetings, held simultaneously on a variety of technical and policy issues at last month’s talks: working groups, contact groups, spin-off groups, informal groups and “informal-informal” groups.

In contrast to some countries, his tiny delegation to Bonn consisted of just three people.

Nonetheless, he says he is still motivated to attend the talks. In the last 10 years, there has been a huge inflow of new technologies and innovations, which he says are helping his country adapt to the consequences of climate change step by step.

“Here in Bonn, we meet a lot, formally and informally, with representatives of other countries and international organisations and discuss our problems. As a result of such meetings new projects are born and conceptualised.” He proudly gestures to his suitcase, stuffed with new ideas and projects. This, he says, is very good news for Kyrgyzstan no matter what happens inside the negotiating rooms.

Many of the journalists who attended the summit have been following the U.N. climate talks for many years now, most recently in Bali, Poznan, Copenhagen and Cancun. With the next annual summit looming in Durban, South Africa, in November, the future of the new international agreement that is due to succeed the Kyoto Protocol remains under a big question mark.

However, despite the uncertainty, examples of projects such as the Kyrgyz solar panels show that there are still small local acts that are tackling the problem of climate change.