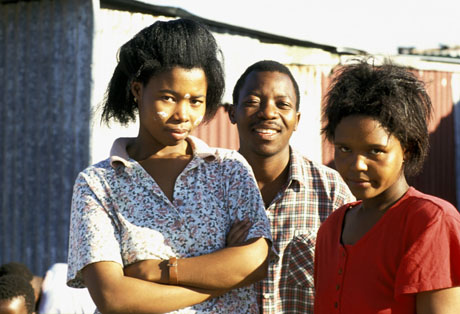 People living in the Khayelitsha township, South Africa, where a new project treating TB patients in the community is being piloted / Chris Sattlberger - Panos pictures

In Khayelitsha, South Africa, people are involved in a groundbreaking project on treating drug-resistant patients in the community rather than hospital.

Everyday hundreds of people throng ‘Site C Clinic’ in this township to collect their antiretrovirals, confirm TB tests or simply get check-ups.

For some, the trip to the clinic is a daily ritual because they have drug-resistant TB. They are part of a groundbreaking pilot project that is treating patients in their community, under strict infection control measures, rather than hospitalising them for months as is the traditional approach.

The project is based on the premise that more patients can be diagnosed and successfully treated if they are supported in their homes, by their communities, rather than in hospitals.

Presiding over Site C is Busi Beko, who understands what her patients are going through. Beko is living with HIV and was herself hospitalised at Brooklyn, Cape Town’s chest hospital in 2006 after being diagnosed with drug-resistant TB. Beko can be seen negotiating her way through the throngs of people sitting on benches against the walls, some collapsed in the laps of their caregivers, others coughing behind thin, white, paper masks. She too has a protective face mask on.

Once outside, she pulls her mask down and walks to a group of women and men. They are members of a support group for drug-resistant TB patients, who meet weekly at Site C, under Beko’s guidance, to share challenges, fears and victories. In the open air, where the risk of transmission is almost zero, all the members of the group have their masks hanging around their necks. But once they go home they resume wearing masks.

This is not easy when people equate masks with TB, and TB with death. “I was thin and I was wearing the mask at home. My family was afraid of me. They wouldn’t let me come near the children,” says Noxolo Mrwetyana, 29, who arrived at Site C a year ago.

“The neighbours too would not let people come to my house. They would say: ‘That lady has big TB’,” adds Mrwetyana. Despite the stigma, the city of Cape Town and Médicines Sans Frontièrs (MSF) have made great strides in establishing a community-based drug-resistant TB programme in Khayelitsha — home to more than 500,000 people, over half of them unemployed.

The programme emerged as an urgent necessity as Brooklyn Hospital, is unable to cope with the numbers of TB drug-resistant patients. Brooklyn is also far away from Khayelitsha and not easy to reach via public transport. Many patients were unable to stay in the hospital for six months as required.

“The support group members tell me that this community treatment programme is helping a lot. How can they go to Brooklyn if they have kids and they are breadwinners? They tell me that if they were told to go to Brooklyn they would abscond or default [on treatment],” explains Beko.

Mother of two, 28-year-old Busiswa Mgqazolo agrees: “I gave birth to my second child while at Brooklyn and had to send him away. It was terrible. I could not see him often and when he visited, I had to wear a mask.”

“At hospital I saw a lot of people dying. It made me feel I was going to die as well,” recalls Mgqazolo, who was discharged from Brooklyn after three months and joined the community programme.

According to the National Institute for Communicable Diseases there were more than 24,000 documented cases of multidrug-resistant TB (MDR-TB) diagnosed over the four-year period from 2004 to 2008 in South Africa. Of these, seven percent were found to be infected with extensively drug-resistant (XDR) TB strains.

In Khayelitsha of the nearly 6,000 people diagnosed with TB in 2008, 196 have been diagnosed with drug-resistant TB to date, a substantial increase from previous years. Experts believe the rise in figures is due to better case detection. Dr Cheryl McDermid, who oversees the pilot project in Khayelitsha, says it is tough to strike a balance, between conveying the seriousness of the treatment and the disease, while also giving the positive message that it can be cured.

“Treatment for drug-resistant TB comes with a tremendous amount of stigma. People know about XDR-TB and believe they are going to die when diagnosed with a drug-resistant strain. We need to break through that barrier,” says McDermid.

Dr Ivan Bromfield, Executive Director for Cape Town Health confirms that the standard way of treating patients in hospitals has become unsustainable. “Being hospitalised is a disincentive. I ask myself, would I be willing to give everything to go to a hospital for six months?”

“The stark reality is that patients, if managed in the community, are more likely to stick to their treatment.” However, he points out that it remains important that the project works in close consultation with the hospital, which is the best option for some patients.