Taking the lead on climate change 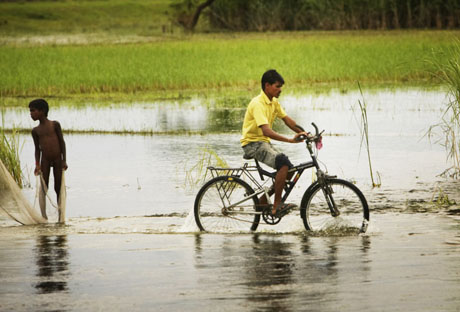 International action on climate change needs the cooperation of both rich and poor countries. But is it time for the developing world to take the initiative in their efforts to adapt?

The United Nations Climate Summit in Poland has heard a call for developing nations and civil society groups based there to get pro-active in tackling climate change, instead of waiting on donors or developed nations to always provide funding or take the lead.

Mr Clifford Mahlung, a member of the Jamaican delegation to the summit, and Mrs Manik Roy, vice-president for federal government outreach at the Pew Center on Global Climate Change, a US group, both underscored the need for developing nations and civil society to take practical action themselves without waiting for others to show them the way.

The two environmentalists made their call on Monday when they addressed a media clinic organised by the Climate Change Media Partnership at the summit in Poznan.

In his presentation to the CCMP fellows, Mr Mahlung stressed the need for countries like his to understand that about 85 per cent of what they do to tackle climate change should be their own work.

“Developing nations have to realize that 85 per cent of their action has to be domestic and that developed nations cannot do it 100 per cent for them,” he said.

He said developing nations should understand that they have to be pro-active in getting the resources for adaptation to climate change and stressed that it would be obvious for the 182 nations who are attending the summit to reach a clear-cut consensus on the adaptation funds for the developing world.

“When someone does not protect you, will you not protect yourself?” he asked. He emphasised that where someone is unprotected, they must take the initiative in protecting themselves. And that was a model for developing nations.

For her part, Mrs Roy stressed the importance of community involvement in addressing climate change. She said the communities and civil society groups must work collaboratively to prevent natural disasters, citing the unrestricted cutting down of trees as an example of where action was needed.

Most delegates from developing nations have persistently blamed the developed world for being slow to provide the funding needed to support adaptation to the effects of climate change.

They say it is this perceived slowness by the industrialised world which is obstructing their own efforts to cope with climate change.