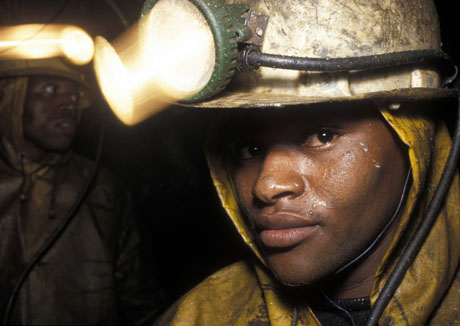 Fifteen years after the end of apartheid, miners in southern Africa have the highest tuberculosis incidence of any working population in the world.

Social, working and health conditions in South African mines have barely changed since the apartheid era and are helping to fuel a TB epidemic, say researchers. They have called for a raft of measures to help migrant miners from mining companies and the South African government.

Occupational and environmental risks such as poor ventilation and exposure to dust make miners in rich as well as poor countries susceptible to TB. However, in southern Africa a potent mixture of an extensive migration system developed during apartheid, together with high HIV prevalence, has left miners particularly vulnerable to the disease. Around 7,000 in every 100,000 miners contract TB in southern Africa, which is at least three times higher than any other country.

“We found that surprisingly little has changed in terms of the risks faced by miners since the end of apartheid in South Africa,” says Dr Sanjay Basu, resident doctor at San Francisco General Hospital, part of the University of California, and co-author of the study. “While the political environment has changed considerably, the health risks facing the miners do not seem to have significantly improved.”

According to the report, a number of conditions have exacerbated the spread of TB in southern Africa. One is so-called circular migration, which was developed over a century ago as a means of moving workers, both within South Africa and from nearby countries, to and from the mines, often over hundreds of miles. The pattern arose under apartheid as the system of racial segregation prohibited black workers from settling in “whites-only” areas close to the mines. Instead the men would live in hostels near the mines and travel home to their families in the off season.

Miners moving back and forth between the mines and their homes do not have access to continuous treatment as there is a lack of discussion between doctors in each area, the study found. This increases the risks of miners developing drug-resistant strains of TB. The report suggests allowing miners to carry standardised paper-based medical records so that doctors can easily access their treatment history.

The report highlights one industry study that reveals that nearly one third of new mineworkers will contract HIV within the first 18 months of employment. It says high levels of sex work and alcoholism in the shantytowns around the mine hostels have helped to fuel transmitted infections, including HIV. People living with HIV are more susceptible to TB because of a weakened immune system.

“The circular migration pattern not only exposes people in low prevalence areas to migrants with a higher prevalence of HIV and tuberculosis, but also prevents continuity of care, adherence support and consistent access to diagnostic facilities for migrating miners”, the report states.

The relaxation of travel laws since the end of apartheid in 1994 has increased the risk of spreading TB as workers now travel further and more frequently. According to the report, more than 50,000 men now travel to South African mines from Lesotho, with 60 per cent returning home at least once a month. Under apartheid miners would normally have travelled home only once or twice a year.

“I was surprised at how tightly correlated the relationship between mining and tuberculosis incidence is,” says Dr Basu. “We rarely find such tight relationships in social science.”

One of the problems that the report highlights is the fact that the mining industry is not required to publicly report its data on disease incidence and outcomes. “Many of the claims made by the mining industry about the quality or outcome of medical services were in direct conflict to independent studies reviewing the high burden of tuberculosis among miners,” Dr Basu says.

The report calls on mining companies to reduce risky exposure in and around the mines. It recommends building better hostels, expanding access to family housing, addressing alcoholism and improving enforcement of occupational health codes.

Title: The production of consumption: addressing the impact of mineral mining on tuberculosis in southern Africa.