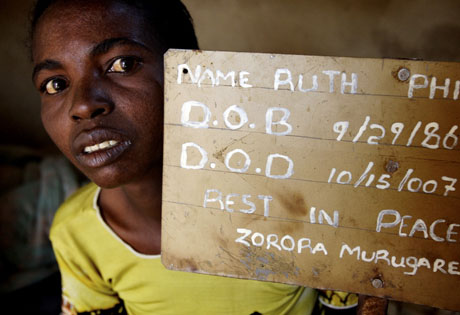 “When I became sick, my mother-in-law and my husband told me that they would not keep me there [her marital home]. They said I had to go to my father’s home. They told me that I had a dangerous disease, so it was impossible to keep me at home. My husband informed me that he would marry again. My sister-in-law always kept a distance from me; she even told her children not to come close to me.”

A female Bangladeshi delegate at AIDS 2008

The experience of this Bangladeshi woman is shared by a large number of women who have TB. Women suffering from TB face social isolation and rejection from their families, especially their husbands. Most of them have very limited knowledge about the disease, but they also have to combat increased discrimination and stigma.

Dr Bonnita Mangura from the New Jersey Medical School Global Tuberculosis Institute said 750,000 women die from TB every year, with the greatest impact being felt by children and families.

“Worries include leaving children as orphans and not having enough money or food to support and nourish families through out the course of the illness. Sadness and anxiety often overshadow physical symptoms, and many consider suicide,” said Dr Mangura.

The WHO fact sheet on women and gender points out that if pregnant women have pulmonary TB the chances of them having pre mature babies or low birth weight babies increase twofold.

The consequences of having TB can be harsher for females. Women patients in a Pakistan study were at risk of divorce or marital break-down. In India, women with tuberculosis were concerned about reduced chances of marriage, rejection by husbands and harassment by in-laws.

“When I fell sick with TB, I was isolated from my two teenage children. I was forced to go and live in our rural village in Kwa-Zulu-Natal, where living conditions were worse than in the tin shack in Diepsloot, where I lived before. I felt miserable,” said South African AIDS activist Nomalanga Khumalo, who is attending AIDS 2008 in Mexico.

In sub-Saharan Africa, where the burden of care is borne by women, caring for TB patients with little or no resources has remained a challenge among poor communities.

“Poor women grapple with caring for sick TB patients using the barest of resources. The burden of care is worsened by food shortages with the caregiver having to scramble to find food for her own family, plus that of the patient’s,” Dr Mangura said.

“In most African countries, women are the breadwinners and this role becomes challenging when the woman falls sick due to TB. Nutrition plays a very important role where the immune system has been compromised by ill health.”

Mary Sandasi, Director, Women AIDS Support Network agrees, “Economic challenges in Zimbabwe have posed another serious hurdle for people suffering from TB. People on TB treatment, like all sick patients, need a solid nutritional base and that is not happening. Again, the burden is on the woman.”

The Zimbabwe government’s ban on non-governmental societies distributing food parcels to the needy has had a negative impact on vulnerable people needing food aid. This has meant more poor families have been pushed to the brink.

Dr Mangura said more men than women are diagnosed with TB and die from it in most parts of the world. According to the WHO fact sheet on TB and HIV the lower figures for women be may be explained by the fact fewer women visit health facilities than men.

Other reasons for the poor attendance of women at TB treatment centres include stigma, difficulty in accessing healthcare, a preference for consulting private practitioners such as traditional healers, lack of female health care providers, and embarrassment at spitting the sputum.

Cost is also a major factor which prevents women from accessing services. Sandasi says,” Where they don’t pay for treatment, they have to pay for diagnosis, X-rays, and travel costs to health centres. This is particularly so in the developing world where health centres maybe far apart.”

So if TB treatment programmes need to succeed they need to step up communication programmes to help more women access TB treatment centres. Simultaneously efforts need to be made to combat stigma and discrimination.