You are here: Home » Blogs & features » Print features » The glacier that buried a village

The glacier that buried a village 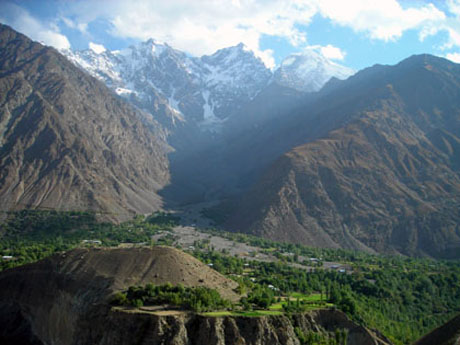 Scientists fear mountain glaciers are melting faster than ever as a result of rising temperatures, leading to fears that glacial lakes are becoming dangerously unstable. For Chitral village in Pakistan’s Hindu Kush mountain range this has already spelled disaster.

“The noise was deafening, louder than thunder” remembers Sher Afzal, a resident of Sonoghure village located in Chitral district in Pakistan’s Hindu Kush mountain range. “It was past midnight and I ran out with my four children and saw the water rushing into the village. We barely managed to escape. We saved ourselves but lost everything else.”

Sonoghure was once considered the most beautiful village in Chitral, known as ‘paradise on earth’ in local songs and folktales for its picturesque orchards, towering poplar trees and old stone houses built on a cliff overlooking Chitral River. Now half the village lies beneath 15 ft of boulders and stones brought down in a massive flood caused by a melting glacier on the mountain above. Around 112 homes out of a total of 330 in the village were destroyed.

Mountain communities living in these remote valleys depend upon their goats, fruit trees and terraced fields for their livelihoods. They are not responsible for climate change yet they are among the first victims of rising temperatures in the region. For them climate change is not a future prediction but a present reality.

The villagers of Sonoghure survived the flood which lasted for three days in July 2007 without loss of life, although they lost much of their livestock. They had been forewarned by Focus Humanitarian Assistance (FOCUS), an international emergency response and disaster risk management agency, which had been monitoring the glacier. FOCUS Pakistan also trained several volunteers in the village and surrounding areas, giving them a stockpile of provisions which helped the community to cope after the flood.

Scientists warn that temperatures in this mountain region are rising faster than in the plains. Nusrat Nasab, Deputy Executive Officer of FOCUS Pakistan says they have identified 155 vulnerable lakes in Chitral and the northern areas of Pakistan, 15 of which are particularly vulnerable. “Several-thousand-year-old glaciers are rapidly disappearing in the Hindu Kush-Himalayan region” says Pradeep Mool, a scientist working for the International Centre for Integrated Mountain Development in Kathmandu. “As valley glaciers retreat, glacial lakes are forming.”

The flood that devastated the village is known as a glacial lake outburst flood or GLOF. These occur when lakes formed by the rapid retreat of glaciers increase in volume, finally bursting out of the unconsolidated moraine and ice which dams them. This leads to a sudden discharge of huge volumes of water and debris which can be catastrophic for those living downstream. Several glacial lake floods have been recorded in nearby Gilgit district as well as across the borders in China, India, Nepal and Bhutan.

“I believe that the glaciers in this region are melting at a staggering rate,” says Indian glaciologist Syed Iqbal Husnain of the Delhi-based Energy and Resources Institute (TERI). “Some glaciers appear to be growing, but it is the melting water underneath which is pushing them up. Sub-glacier lakes are increasing which then burst as GLOFs.” In fact, GLOFs are occurring in other mountain regions as well, in British Columbia, Central Asia, Europe and South America.

In Sonoghure, villagers observed water seeping out of the ground near the glacier shortly before the flood hit the village – it is likely a lake formed beneath the glacier, which is still quite large. There are fears it might burst again, since there was heavy snowfall in Chitral last winter which has fed the glacier. If so, it will create more hardship. “The flood destroyed not only our fields and homes, but also the village hospital, schools, roads, water pipelines, electricity poles and swept away three bridges on the river that connected the village with the main road,” says Sahib Faraz, the FOCUS designated ‘village captain’ who was in charge of the response effort.

“We lost walnut and mulberry trees that were over 1000 years old. Each household had an orchard and we could sell one sack of walnuts for around Rs 10,000 (US$120) to the local tradesmen. Now we are taking loans and struggling to get by as daily wage labourers. We can’t even afford to send our children to college for further studies”.

It has been two years since the disaster and villagers say the government is still not helping them rebuild their infrastructure. A rickety bridge across the river connects the village to the main road and it takes well over an hour to get to the village from the nearest town of Booni by jeep. “We have lost our livelihoods. Some of us are still living in tents. Please let the outside world know what is going on here,” says Sahib Faraz.

The mountain villagers attribute the catastrophe to God’s will. “Perhaps we made some mistake and did not make God happy” says 73-year-old Bulbul Zar, who cannot remember such a flood in his lifetime or his father’s. Not many make the connection between rising temperatures caused by carbon emissions in the towns and melting valley glaciers in the mountains. Even if they do, they feel helpless.

Nowhere else to go

As for their future plans, they don’t have too many options. Those who have some resources are rebuilding their houses on top of the rocks where the flood hit the village, others have moved in with relatives whose homes were spared. A flood could certainly happen again, but no one knows when. They really have nowhere else to go and the realisation is sinking in that the government is not going to give them alternative land as compensation. Landholdings are very scarce in these high mountains.

The boulders and sand covering the village act as a stark reminder of the glacier that roared down the mountain and changed their lives forever. Throughout Chitral district, villagers look up at their glacier-clad mountains, and fear that what happened in Sonoghure could happen to them as well.

Rina Saeed Khan is a Lahore based freelance journalist. She wrote this article thanks to a fellowship with the Climate Change Media Partnership – an initiative of the Panos Network, Internews and the International Institute for Environment and Development (IIED).