The uncounted people: waste-pickers of India 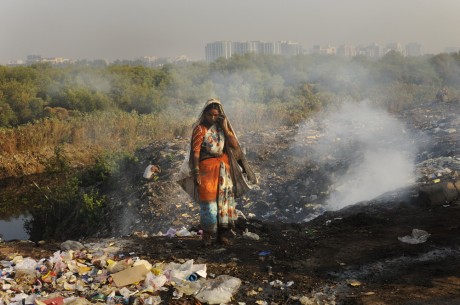 Despite the chilly winter air, Chinnamma’s day begins at 5am. Wrapping a length of her sari over her head and hugging her shawl around her shoulders, the 48-year-old makes her way to Jawaharnagar municipal dump on the outskirts of Hyderabad. The smell from the mountains of rotting refuse is overpowering but Chinnamma hurries in. A delay could mean a day of no earnings as the gates are locked after 7am and she must get in and out before that time.

An hour later, Chinnamma has filled a plastic bag filled with her precious collection: empty bottles, empty cans, rags, torn shoes, scraps of plastic and pieces of metal. Sorted neatly in separate bundles, she will later sell this collection to a scrap dealer for around Rs 5 (6p) a kilo. On a lucky day, she will make about Rs 150 – a little under £2.

Chinnamma is an unofficial or “free-roaming” waste-picker, one of an estimated 8,000 men and women in Hyderabad who scrape a livelihood by sifting through garbage, looking for items to recycle and sell on.

Sorting through the rubbish in the semi-darkness is fraught with risk. Infection and illness aside, Chinnamma’s worst fear is getting buried under a sudden avalanche of refuse. In the past year alone, six waste-pickers – three of them women – have been buried in this way in this dumping ground. Of those six, the body of only one was recovered – the rest are still untraced. After this the city authorities started to lock the gates of the dumping site to stop the waste-pickers from getting inside. 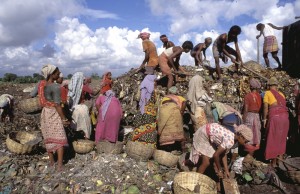 A further 7,000 recognised waste-pickers work for the Greater Hyderabad Municipal Corporation (GHMC). They each collect rubbish from around 200 homes and get paid Rs 30 each month by each of the families, bringing in a total of Rs 6,000 (£77) a month.

Between them they help to collect, sift and process the city’s waste – an estimated 3,800 metric tons of waste every day, the equivalent of 322 double decker buses – providing an informal and environmentally friendly recycling service.

It would be hard to call it a “living” but waste-picking allows Chinnamma to pay the Rs 1,500 monthly rent on her hut in a nearby slum. Without it she would be evicted. However, her means of survival is now under threat.

This month GHMC is handing over management of the city’s rubbish to Ramky Enviro Engineers, a waste management company which already runs 14 waste management facilities across India. The city’s refuse will be used to fuel a gas-based power plant, while the rest of the waste will be supplied to two similar government-owned plants that are currently under construction.

As a result there will be nothing left for the waste-pickers to collect or sell. Some will find temporary work at construction sites, while the women will look for work as domestic maids. However, without a reference letter they are unlikely to be hired. The only other option is illegal sex work.

The future of the recognised waste-pickers is also uncertain as Ramky has no legal obligation towards them. Satya Adamala, project director in Ramky’s solid waste management division, says that the company will try to retain GHMC’s current waste-picker force.

However, Susheela, a GHMC waste-picker, says:

“Currently most of us earn Rs 2,000 every month from selling recyclables which is outside of our salary (Rs 6,000). But we have been told that from next month, our salary will be Rs 3000 and we should not take any recyclable material. If that happens, our earnings will be less than half of what we make now.”

GHMC’s move to privatise waste-management in Hyderabad is opposed by the Association for Promoting Social Action (APSA), a Hyderabad-based NGO that works to protect the rights of waste-pickers. APSA has appealed to both the state and the National Human Rights Commission to review the Ramky contract.

“The waste-pickers have been segregating and recycling over 12 per cent of the city’s total waste on their own. If better trained and given financial and technical support, the percentage can grow manifold.”

There are several successful examples of this across India. In Ahmedabad, in the western state of Gujarat, 200 women waste-pickers run a small business producing diaries, notepads and pens made from recycled waste. The Gitanjali Mahila Sewa Industrial Stationery Producers Cooperative Mandli is supported by We-Connect, a private sector forum, and the global consultancy firm Accenture, and customers include the World Bank. Similar recycling units are being run by waste-pickers’ co-operatives in Valod, also in Gujarat, and Pune in Maharashtra. 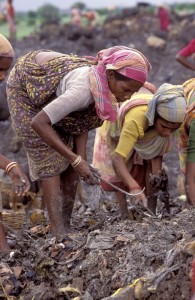 APSA has been lobbying the GHMC to count and recognise all the free-roaming waste-pickers in the city, providing them with a safer, more regular income.

“We were also in talks with GHMC to provide health insurance to the waste-pickers,” says Reddy. “But the privatisation move has derailed this entire process.”

Supporting APSA in its fight to protect the livelihood of free-roaming waste-pickers is the Global Alliance for Incinerator Alternatives (GAIA), a worldwide alliance of more than 600 non-profit organisations that opposes waste disposal by incineration and campaigns for increased recycling by waste-pickers.

According to Dharmesh Shah, GAIA’s India Coordinator, landfill gas-to-energy projects are simply a modern method of incinerating waste and give no environmental benefits. In contrast, the waste-pickers help build an informal but environmentally-friendly economy through low-cost sorting and recycling.

“There are about 15 million people in India who earn a living from the collection and recycling of solid waste,” says Mr Shah.

“They are not just keeping the cities clean but also contributing towards saving the environment. The government should provide them every facility that it provides to employees in other sectors such as guarantee of work, housing, subsidised food, free medical care and pension. But in reality, the waste collectors are deprived of even the basic amenities.”

The number of unofficial waste-pickers in Hyderabad is on the rise and campaigners warn that banning them will not make them go away. Driven by lack of employment in their villages, these men and women arrive in the city looking for work. They are one of the most marginalised groups in India. The majority are Dalit (previously known as Untouchables) and landless, with almost no education or skills. Litter-picking is one of the only options open to them for survival.

Once in the city, waste-pickers work in deplorable conditions. They have no protective gear, handling the waste with bare hands and living close to the dumping grounds which are rotting, stinking mass of waste. Rates of tuberculosis, cancer and renal failure are high, as are alcoholism and substance abuse. “The smell at the dump yard is stomach-churning. You can work and live here only if you are out of your senses,” Chinnamma explains.

Sivarani, a slum development coordinator with APSA who has been working with the city’s waste-pickers for more than 15 years, says they should have been given a chance to contribute to the debate.

“Nobody should decide the fate of the waste-pickers on their behalf,” she says.

“Currently, the entire deal is happening between the municipality and private companies. The waste-pickers, whose lives revolve around the issue, should be the central party to this deal, but they are nowhere in the picture.”

With support from APSA, 500 free-roaming waste-pickers have recently united under a banner called the Federation of Waste Collectors of Hyderabad. In November last year, ten of them visited a recycling co-operative run by waste-pickers in Pune. “Like them, we can also make compost, diaries, cups and calendars. The government, we hear, has banned plastic bags. We can make and supply paper bags to stores instead,” says Chinnamma.

The will is there among the waste-pickers. But so far the government has not been listening.