You are here: Home » Blogs & features » Print features » The unlikely radio stars of an Indian village

The unlikely radio stars of an Indian village 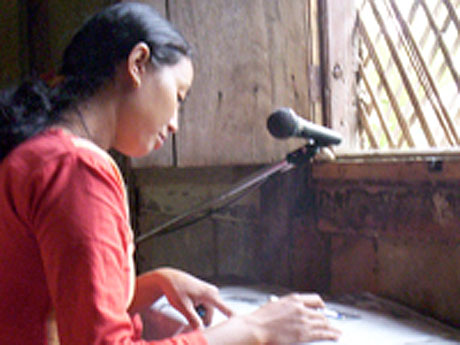 A crude loudspeaker, a PA system and dedicated news presenters are attracting loyal listeners in a remote Indian village.

A crude loudspeaker and a PA are the only pieces of technical equipment in a large hall where a long wooden bench by the window serves as the news desk. As the smell of fresh cow dung wafts into the room from the fields outside, a young woman grumbles as she tries to fix a microphone to its stand.”They borrowed the set for a farmer’s meeting yesterday and have left it like this,” she says in a low voice and tries to reconnect the jumble of wires.

This is the studio of the tiny Paothang Channel, which has become a trusted news source for many of Takhel village’s 5,000 residents. Takhel is only 15km from Imphal, the state capital of Manipur, but it remains an isolated pocket, concealed from the outside world by the Tinseed and Thumbi hill ranges.

In Meiteilon – the language of the Meitei population of Manipur – Paothang means ‘news relay’. But the Paothang Channel is more like a social service than a conventional media operation. It is the sole people’s broadcast initiative in Manipur.

The grumbling young woman is the voice of the channel, an unmarried 27-year-old called Arambam Romita who reads out news directly from the Poknapham newspaper, the largest selling Meiteilon-language daily in the state.

These newscasts are relayed via four loudspeakers hooked up to a simple PA system. The official editor and patron of the channel is Tensubam Ratan, local member of the district level governing body, the zila parishad. Together with an educated farmer Keisham Biren, he set up the channel.

But it is Biren’s co-presenter Romita who is undisputedly the voice of the channel. “I used to like the way the newsreaders read news on radio and TV. So when Tamo [Biren] asked me to join as he couldn’t manage the work alone, I agreed readily.”

“It is basically our own interest – not profit – that guides us, otherwise we’d have stopped long ago,” Biren adds. The dilapidated hall is the station’s third ‘studio’ – the first was in a hotel for about a year, then the second at his house for a brief while.

“I like [reading news] most when there is good supply of light, the microphone is good, there’s silence around and I have come out from home without an argument. I practiced a lot, mostly in the nights, reading aloud to my mother or the young kids in my area, or mostly to myself,” says Romita.

“When I am reading, an urge to know more about the incident or news wells up inside me. I am also excited that people will be listening,” she adds.

At 7.50am, Romita and Biren get ready to read the news. The light from the window crisscrossed by a wooden cane falls on the watches they keep on the desk before them. They check that the microphone is on.

“Paothang Channel welcomes all its listeners. We are on air,” says Biren. “In this world full of differences of caste, colour, and creed, let’s not be divided by these artificial walls,” he adds.

And then he makes an announcement – the local Communist Party of India branch will be meeting the next day and all its members are asked to attend.

Romita takes over, speaking in a soft voice. There are many good stories today:

Twelve suspected militants were captured with arms in the official quarters of five MLAs. The signing of a memorandum by seven elected people’s representatives of Manipur – one to the Indian Parliament and six to the state legislative assembly – expressing their support for Naga integration. There are more than 20 insurgent groups operating in Manipur, waging an armed struggle against the government of India, mostly for the right to self-determination.

As she reads on, on the outskirts of the meadow, just beyond the barbed wire fencing, a solitary man shifts on top of his bullock cart and listens, his chin resting on his arms.

The most recent readership survey of Indian newspapers reveals a surge in readers of local language papers. Rural readers are seen as an important market, making up nearly 50 per cent of daily newspaper readers. The editor-in-chief of the Hindu newspapers, N Ram, recently described rural Indians as”a massive latent readership”.

But in Thakel, despite a large number of the population being able to read, most would rather spend the 70 rupees a month as newspaper subscription on bidis (small cigarettes) or on food and schooling for their kids.

Thoudam Pakpi is a weaver. Her mud and straw house lies directly opposite Paothang Channel’s studio. “Most of us are poor, so we can’t subscribe to a newspaper. We don’t have a radio or TV, but my neighbour, two houses down has a TV and we sometimes go there to watch if there’s a good movie,” says the 34-year old. “Thanks to Paothang we can all listen now,’ she adds.

Biren takes over for the sports news then rounds off the 20-minute broadcast with a word of caution against the use of drugs and intoxicants.

Ratan, the channel’s founder, gives the two newsreaders a modest monthly honorarium of Rs 300-500 which they share. He also paid for the microphone and meets the monthly newspaper subscription costs.

There are no commercial (independent) radio stations in Manipur and previous projects in Lilasing Khongnangkhong and Sagolband Khamnam Leirak in Imphal west district are no longer active. Television offers residents two national channels beamed by the state-run Doordarshan TV network. Cable TV, as well as the popular news cable network ISTV, hasn’t reached Takhel yet. “It won’t be hard bringing cable network to our village, but there is low interest in cable. Everyone asks, what’s the use?” says Biren.

According to Sevanti Ninan, journalist, author, columnist and media critic, “such an initiative is actually the forerunner of local community radio, which has recently been permitted by the Indian government. It offers news that the local community needs for its day to day functioning, also news that connects it to the rest of the country and state.”

“The way Romita and Biren respond to a local need is similar to what communities are doing in other parts of the country. In Kurnool and Medak districts of Andhra Pradesh, in Daltnganj in Bihar, in Karnataka and in the Rann of Kutch. They all write their news using conventional news sources, and then find ways to transmit it to their community.

In fact because there has been pressure for several years now from local and national activists for community media, the central government has finally changed policy and decided to open up very local frequencies to communities in rural and urban India,” she adds.

Paothang Channel has become such an integral part of the lives of the locals that they use the news broadcast to time their daily activities. “Sometimes when we don’t broadcast, children aren’t able to reach school in time. Farmers who had thought they’ll come up after the news stay in the fields till noon waiting for the news. So now we announce if there is going to be no news broadcast,” Biren tells me.

Without Paothang Channel, many in the village could still get the major news in the state through All India Radio. What they would lose is hearing the news from all sides. Unlike the state-run radio, the newspapers carry news statements from the insurgent groups active in the state.

“It is an invaluable service that they are doing,” says Amom Bhuban, secretary of the Takel Youth Welfare Organisation. “Besides their role of spreading information, hearing the news every morning has become part of our lives. That is another reason why we want to keep it alive.”