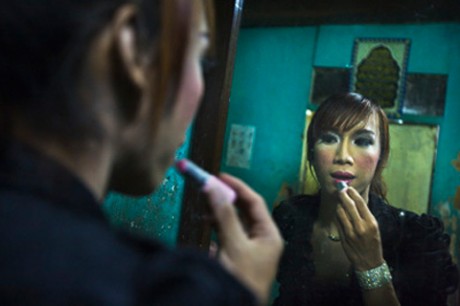 When Bea became a sex worker in the red light district of Jakarta, Indonesia, she knew she needed to use condoms to protect herself from HIV but her clients refused to use them.

Bea, 30, is a waria – a man who has assumed a female identity. The word is derived from wanita, which means woman in Indonesian, and pria, meaning man. Whether they wear women’s clothes or have undergone a full sex change operation, waria view themselves women.

“I knew the big risks that having this job would bring,” she says matter-of-factly, although her voice betrays emotion.

Nightfall in Taman Lawang, a street in the Menteng subdistrict of central Jakarta, signals the start of Bea’s day. Dressed in fishnet stockings, her short hair dyed burgundy, pale skin exposed in her short t-shirt, Bea takes her place. Groups of waria sex workers, clad in tight dresses and flawless make-up, line the streets, sauntering in vertiginous heels and calling out to strangers in melodic, teasing voices.

Since discovering she was HIV positive, Bea has insisted on using condoms. If a customer does not want to use one, she rejects them. But many waria, relying on sex work as their only income, continue not to use condoms.

According to a 2007 integrated biological-behavioral surveillance (IBBS) study of high-risk groups there are around 35,000 waria in Indonesia. Eighty per cent of the waria interviewed in the cities of Jakarta, Bandung, Semarang and Surabaya, had sold sex to male customers in the last year.

The study, carried out by Indonesia’s National Aids Prevention and Control Commission (Komisi Penanggulan AIDS, or KPA), the ministry for health and USAID, among others, suggests HIV prevalence rate among waria sex workers had reached 34 per cent in Jakarta, 28 per cent in Surabaya and 16 per cent in Bandung. Less than 50 per cent were using condoms.

Indonesia has the fastest-growing rates of HIV/AIDS infection in Asia, with more than 300,000 HIV cases, according to UNAIDS. Meanwhile, condom use is extremely low, partly due to opposition from Islamic groups that argue condoms encourage people to have sex outside marriage.

The KPA has been forced to address the issue, breaking the taboo against condoms to announce the country’s first national condom week in 2007. In 2008, the KPA announced it had distributed 20 million condoms to targeted high-risk groups across the country. The commission now aims to install 22,000 condom outlets by 2013 in the 12 provinces with the highest HIV prevalence.

Permana says that the KPA has tried to improve its communication strategy this year. Where previously they focused solely on why condoms are necessary to avoid contracting HIV, they now spread the message within the context of eliminating discrimination. “They are trying to tell them that you should be proud of who you are, and that you should therefore take care of yourself and take the necessary precautions,” he said.

Accessibility to condoms is only one battle

Ienes Angela is an HIV programme manager at the Srikandi Sejati Foundation, helping Bea and other waria get subsidised HIV treatment. A waria herself, she says that greater accessibility to condoms is only one battle.

The bigger fight, she believes, is against prejudice. What the waria need from the government is the recognition of their identity in order to help them find jobs beyond the sex trade.

Ienes says another problem is that official documents define waria as men. If a waria arrives at a job interview dressed as a woman her chances of getting hired are virtually nil. “They don’t think of our capability, only our sexual identity,” she says.

The waria also have difficulties securing national ID cards (Kartu Tanda Penduduk, commonly known as a KTP), which are needed to get free HIV treatment. Rejection by their families is a root cause of this problem. To get a KTP, you need a family card – a document that contains the identity of family members and the order and relationships in the family. But many waria have been kicked out by their families, says Tono Permana, of the Jaringan GWL-INA Network.

Across Indonesia, the obstacles are similar. The International Gay and Lesbian Human Rights Commission notes that regulations in West Sumatra and West Java equate being a waria or being homosexual to prostitution. Meanwhile, Aceh, an autonomous province that operates under Sharia law, passed a by-law last year punishing homosexual acts with up to eight years in prison, 100 lashes and a fine of up to one kilo of gold.

As a result of this discrimination, the majority of waria are confined to working in beauty salons or as sex workers.

Bea has worked as both. She was an assistant at a beauty parlour when she was 17 but left after three years. As a hairdresser she earned Rp 30,000 (£2.13) a day. As a sex worker she earns a little over three times as much – although some nights she goes home empty handed. While Bea was aware of the dangers of sex work she said that at the time it seemed to be the “right choice” – she needed the money and there were no other options.

When asked how the government could help her, Bea says without hesitation: “Give me some place to work – anywhere other than the streets.” But for now she continues to stand on Taman Lawang waiting for the cars to stop.