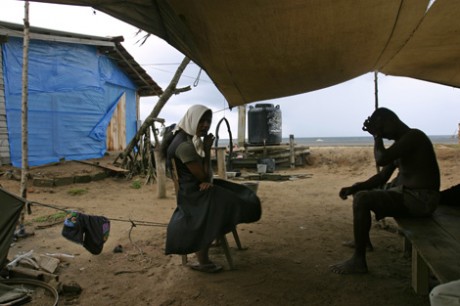 A recent report on the aftermath of the 2004 tsunami compares how housing conditions affected the health of displaced people in Sri Lanka. With scientists predicting a rise in climate-related catastrophes, the results could provide valuable insights in how best to care for displaced people following future natural disasters.

“The difference between African war and famine refugee situations and the Sri Lankan tsunami situation, in terms of health, is that in the Sri Lankan transition camps there were no significant epidemics or increases in mortality rates after the first week,” says the study’s main author, Alex Turner, a researcher at the University of Birmingham. “However, what we did find is that although the displaced people were from similar social and economic backgrounds, overall health perceptions differed between those living in transition camps and those in permanent housing.”

People displaced by the tsunami in Sri Lanka were housed in either transition camps or permanent housing provided by the government and non-governmental organisations (NGOs).

The World Health Organisation described Sri Lankan transition camps as “cramped” and “overcrowded”. The houses were one-roomed wooden constructions with tin roofs and poor ventilation. On the other hand, permanent houses had multiple rooms with separate cooking areas and sometimes piped water and inside toilets. The researchers interviewed 154 participants in transition camps and 147 from permanent housing projects. The report, Sri Lankan tsunami refugees: a cross sectional study of the relationships between housing conditions and self-reported health, was published in the online journal, BMC International Health and Human Rights.

The link between living conditions and perceptions of health

“Living in transition camps seems to be a high risk factor for reporting a number of symptoms of ill health,” says Mr Turner. “People in the transition camps scored lower for overall current health and reported suffering significantly more than those in permanent housing.”

The most common complaints from people in transition camps were of stomach aches and headaches, while almost half of those interviewed reported coughs, the report found. There are possible environmental causes for these complaints, including overcrowding, using coal or wood to cook with in poorly ventilated houses, and communal water and toilet facilities, shared between as many as 100 and 1,000 people. However, the authors found there could also be psychological reasons for the difference in people’s perceptions of their health.

The report suggests that so-called somatisation – a form of psychological distress triggered by trauma, which manifests itself in poor physical health – could explain the discrepancies.

As the report explains: “It is interesting to note that the symptoms with very high odds ratios (headaches, stomach aches and general aches and pains) are often thought not to be primarily organic in origin.”

For example, individuals reporting that their homes contained lots of mould were shown to have a significant risk of reporting “headaches”, yet previous studies investigating the health effects of domestic mould have not shown this relationship.

“It is possible that psychological distress associated with living in a transitional camp could explain a proportion of the high prevalence of reported pain symptoms of the internally displaced people living there,” the report continues. It points to previous studies which found Sri Lankans often display somatisation rather than classic western symptoms of psychological distress.

“[Somatisation] is a cultural phenomenon and is possibly enhanced by the social stigma of mental health problems in Sri Lanka,” Mr Turner explains.

The report concludes that greater emphasis needs to be put on moving people into housing projects as soon as possible following natural disasters, to minimise psychological and physical distress.

“People need to be moved into permanent housing as soon as possible,” Mr Turner says. “This needs to be planned for in the early stages of a disaster.”