You are here: Home » Blogs & features » Print features » Uganda: Mobile phone tax – a cash cow or a barrier to development?

Uganda: Mobile phone tax – a cash cow or a barrier to development? 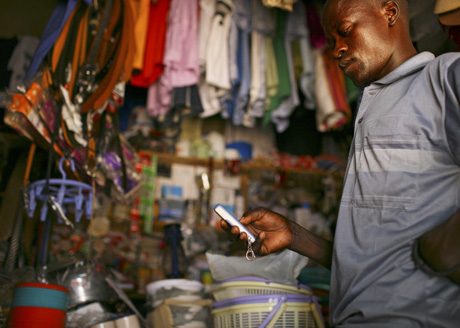 Uganda | A man in a shop uses his mobile phone, which can be used to pay for transactions / Abbie Trayler-Smith - Panos Pictures

Many Africans consider mobile phones a lifeline rather than a luxury, yet for a large number of the rural poor they are still prohibitively expensive to buy and use. Mobile phone companies have been lobbying governments, including Uganda’s, to cut high mobile phone taxes, which they say inflate prices.

Drive through most towns in Uganda these days and you are greeted by rows of shops and stalls freshly painted in the bright colours of the country’s competing telecoms companies.

This is just one indication of how pervasive the mobile phone has become in the life of Ugandans.

Mobile phone connections have surged in the last decade from 50,000 to 10 million, making Uganda the first African country to have more mobile phones than fixed line connections.

You do not have to look far to see the impact of the mobile on people’s lives. They are used to send money, to check crop prices, run businesses and keep in touch.

The country’s six mobile phone operators – MTN, Zain, Uganda Telecom, Warid, Orange and I-Tel – have heavily invested in infrastructure, particularly in rural areas, and directly employ about 350,000 people. And this number does not include the thousands who sell airtime or repair mobiles, says Isaac Kalembe, the Uganda Communications Commission’s media specialist.

“There is plenty of evidence of how mobile phones have contributed to the economic development of users,” says Dorothy Okello, a lecturer at Makerere University in Kampala, who has spent more than a decade teaching, researching, and conducting information communication technology (ICT) projects across Uganda.

She says using mobiles to transfer money – so-called “mobile money transfer” – has been a breakthrough for many Ugandans as it eliminates the bureaucracy that clogs financial transactions in the country’s traditional banking sector.

“People fear going to the bank,” says Ms Okello, who is also the coordinator of Women of Uganda Network, a non-governmental organisation which promotes the use of ICTs by women. “They say: I don’t have an account and what do I go to do in the bank? So having money sent to their mobile phone breaks that barrier.”

Milton Anyuku, a retail trader in Arua town, some 520 kilometres northwest of Kampala, used to spend around KES6,000 (US$80) on transport, food and accommodation travelling to Kampala to buy shoes, textiles and trimmings for his shop. Having a mobile phone has dramatically reduced his costs.

“Now all I need is phone credit to make a five-minute call and the wholesaler in Kampala loads my goods onto cargo trucks or the bus and I receive them without any hassle,” he says, smiling.

He pays for the merchandise using mobile money transfer.

FoodNet, a post-harvest and marketing research firm, gathers everyday market prices of farm products across the country and uploads the information onto a purpose-built virtual platform. Around 100,000 farmers currently access the data on their phones by text message, guiding them as to where they can get the highest price for their produce.

However, a large section of the Ugandan population – the rural poor – are still on the fringes of this communication revolution, mainly due to prohibitive call rates, resulting from high mobile phone taxes.

Ugandans pay a sector specific tax of 12 per cent on mobile phone usage, the highest in East Africa.

The GSMA – which, as the lobbying body for the mobile phone industry, has a vested interest in more mobiles being used and sold – wants to see countries like Uganda cut all ownership specific taxes (i.e. all non-VAT taxes relating to handsets, subscription and connections) on mobile phones to around three per cent.

In a research report, Taxation and the Growth of Mobile in East Africa, the GSMA argues that these taxes are regressive (in other words a tax that imposes a greater burden on the poor than the rich). It also argues that reducing taxes would generate more money for the government in the long run as it would boost the use of mobiles.

However, last month the Ugandan government rejected a proposal, submitted by opposition MPs, to scrap taxes on mobile phones.

A tax boon for the government

Mobile phone tax has been an unexpected boon to Uganda’s government.

Keith Muhakanizi, the under-secretary in the Ministry of Finance, said: “If there are no taxes on people using mobile phones, whom do we tax then? Can we have a government without taxes?” Uganda Revenue Authority, the statutory body collecting taxes, says net tax collections from telecommunications companies last year amounted to KES 267 billion (US$3.57 billion) or 9.5 per cent of the country’s total tax revenue.

“Scrapping local excise and VAT tariffs for the sector would imply a huge revenue gap considering that these two tax heads contribute more than 55 per cent of the total tax collected from the telecommunication companies,” says Sarah Banage, the Uganda Revenue Authority’s assistant commissioner for public and corporate affairs.

Ms Banage says the windfall from the telecoms industry, the country’s third biggest contributor to tax revenues, behind wholesale and retail trade and manufacturing, comes in handy for a government pursuing a self-sustaining economy when donors currently fund 30 per cent of its budget.

Despite high taxes, the telecommunications sector in Uganda has continued to grow phenomenally.

In the first quarter of 2009, a total 1.6 billion billed voice call minutes were made, 14 per cent higher than for the previous quarter, text message traffic grew by 54 per cent to 294 million within the same period.

However, independent experts warn these taxes prevent low income groups, particularly the nine million Ugandans who live on less than a dollar a day, from enjoying the benefits of mobile phones.

The Information Economy Report, published last month by the UN Conference on Trade and Development, stated: “Taxes can also act as a barrier [to the spread of mobile phones], particularly import duties on handsets or special mobile communications surcharges. The mobile industry has been seen as a cash cow in some countries.”

“Why is it cheaper to call from neighbouring countries and not in Uganda?” asks Dr Francis Tusubira, an ICT specialist and director of Makerere University’s Directorate for ICT Support.

Dr Tusu, as he is known, says the country’s ICT ministry is struggling to introduce a uniform tariff for all telecom operators, but there is resistance from some of the players.

Interviewed by mobile phone hundreds of miles away in Ghana, West Africa, Dr Tusu says the mobile operators in Uganda, as in many African countries, transfer high taxes charged by government to clients in the form of increased call rates. As a result, it’s the fortunes of the users that are hurt, he argues.

“There is a regulatory failure,” says Dr Tusu. “The government should carry out a real analysis of the cost build-up for telecom operators so that a realistic cap is put on tariffs that enable the companies to make decent profits, but not profiteering.”

This article drew on the following research: