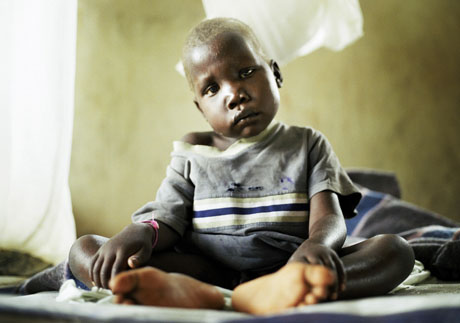 Ronald Okwir sits in a feeding centre after his parents were killed by the Lord's Resistance Army. A new study shows that orphaned boys are at a greater risk of suffering from depression / Chris de Bode - Panos pictures

Orphaned boys in Uganda are more likely to struggle with mental health problems following the death of a parent than girls in a similar situation, according to a study by Johns Hopkins University.

According to the study published in the journal Social Science and Medicine orphaned boys have higher levels of depression than either orphaned girls or children who have been neither orphaned nor fostered.

According to the World Health Organization, mental health issues “can amplify people’s vulnerability and can lead to individuals to a life of poverty”. The authors of the report therefore argue it is important to understand how orphanhood affects children. The findings have serious implications for Uganda where decades of civil war and a mature HIV epidemic have left 1.2 million children orphaned – equivalent to 13.2 per cent of young people.

“[O]ur study showed that orphanhood is strongly associated with a more hopeless outlook only among certain categories of male orphans,” explains one of the authors, Esther Kaggwa, a research fellow at the Institute of Public Health at Makerere University in Kampala, Uganda.  “Female orphans were not at an increased risk of negative psychological outcomes,” she said.

“Girls in Uganda generally receive more nurturing and attention [from other surviving relatives]”, says Ms Kaggwa. “So male orphans may therefore face the consequences of parental loss more than their female counterparts, putting them at a higher risk of depression.”

Moreover, males are expected to be the main source of income in Ugandan households, meaning boys who have lost their fathers are burdened with additional pressures. “Male orphans perceive and/or actually take on responsibility for younger siblings upon parental death”, the study claims.

“The loss of a father is more likely associated with a reduction in household income, reducing significantly access to basic necessities,” explains Ms Kaggwa. “This could explain the higher levels of hopelessness among male paternal orphans [male orphans who have lost their fathers] especially when coupled with the gender differences in parenting.”

The researchers interviewed 1,309 students (665 males and 645 females) at 10 randomly picked schools in Mukono Town District between November 2007 and March 2008. The students were asked about their parents, family environment, wealth and school as well as how they felt about their lives and future.

According to the report, even boys who had lost both parents were no more likely to be depressed than non-orphans if they were then looked after by a supportive and stable family environment,

“The family environment provides a level of security, care and attention,” says Ms Kaggwa. “Orphans who share a strong bond with their adoptive families are less likely to have negative psychological outcomes than those in families where the level of care and attention is minimal,” she adds.

The study concludes it is vital to understand the orphan’s family environment in order to improve psychological well-being. The researchers suggest that reducing the cost of secondary education would help to reduce mental ill-health amongst orphans, especially boys, as it would help reduce the financial burden and associated stresses on families.

“Efforts to keep orphans and other youth in school as well as efforts ensuring access to basic necessities would go a long way to reduce the level of hopelessness,” Ms Kaggwa concludes.

Title: The psychological effect of orphanhood in a matured HIV epidemic: An analysis of young people in Mukono, Uganda