You are here: Home » Blogs & features » Print features » Uganda strives for a generation free from HIV

Uganda strives for a generation free from HIV 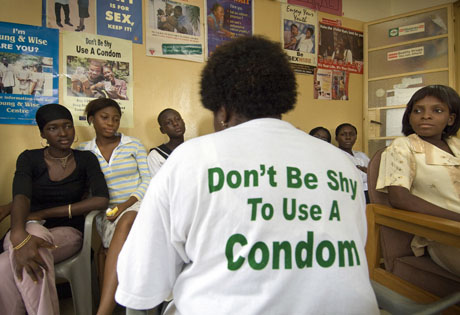 Ghana: Educator at a youth club talks about the use of condoms / Sven Torfinn - Panos Pictures

Uganda’s government wants to protect its teenagers from HIV, but it must first treat them as adults to give them the information they need.

Against a soothing instrumental background, a group of female friends discuss the hazards of sugar daddies on a popular Ugandan radio show.

Mary: Let me tell you about this friend of mine. A few months ago she told me mbu [that] she met this nice guy with a lot of money. Yes he was married but he treated her like a queen, took her to all the nice clubs, and bought her a really cool phone. Even the expensive clothes, he bought. Now yesterday she came to me crying, her world is falling a part. She has just found out that she is pregnant.

Kate: And the nice man?

Mary: He is not interested. He is tired of her. But that is not the worst part; she is also infected with HIV.

Kate: Girls! The gifts, the nights out, the cash, can never be worth your life and future. Older men are taking advantage of you and putting you at risk of HIV infection in exchange for these bu [small] things. This practice is called cross-generational sex. Respect yourselves, do what I do. Say no to sugar daddies…

Uganda wants an HIV-free generation and, to help to achieve this, the government has begun an onslaught against so-called cross-generational sex. The practice is defined as young people, especially girls, entering into sexual relationships with people who are more than ten years older.

Catchy as it is, I believe this media campaign is in danger of overlooking an inconvenient truth – young people are not contracting HIV simply because they have sex with older people, they are also at risk of transmitting HIV to one another.

It’s all very well telling young people to ‘say no to sugar daddies’. But any campaign that ignores the fact that many young people have sexual relationships with each other is likely to fail. Young people will continue to contract HIV unless they talk honestly to their sexual partners about their HIV status (whatever their age).

What’s more, there are many thousands of young people in Uganda and across the globe who are HIV positive as a result of contracting the virus at birth. They still want to exercise their right to loving relationships and even to have children.

Gone are the days when most infants infected with HIV died within the first two years of life. The advent of antiretroviral therapy has seen many living to adulthood – in 2006, Uganda’s longest-surviving person born with HIV turned 23 years old, thanks to these life-saving medicines.

Significant numbers of these adolescents have registered with support organisations in Uganda. By the end of last year TASO (The Aids Support Organisation) had on its books nearly 5,000 10- to 19-year-olds who have been living with HIV since infancy. The Mildmay Centre just outside Kampala had over 600 young people, while the national referral hospital in Mulago had over 500.

During a media dialogue organized by the Mildmay Centre and the Uganda Aids Commission earlier this year Dr Ivy Kasirye, a paediatrician at the Mildmay Centre, admitted that dealing with the adolescents is complicated.

“We all know what adolescents are like. The fact that they also have a package of HIV with them makes it a hard situation,” she said. “As is natural, they become experimental, they have natural desires. So one of the biggest challenges we have is handling sexuality in our adolescents.”

The Population Council and its partners, using funds from the United States Agency for International Development, has just completed the first study to address the reproductive health needs of adolescents born with HIV in Uganda. The results are troubling.

Of its sample of more than 700 10- to 19-year-olds, many are dating – 39 per cent are in a casual relationship – and others desire to love and be loved. Fair enough. But more than half of these young people say they are afraid of disclosing their HIV status.

Furthermore, three in five of those who are sexually active said they did not use any protective method the first time they had sex. A similar proportion of those in a relationship have never discussed their HIV status with their current partner, while two-thirds do not know the status of their current partner.

I spoke to one 17-year-old living with HIV who gets treatment from a TASO centre in eastern Uganda. He told me: “I am in a sexual relationship but I have not yet told my status to my partner whose sero-status I am not aware of. I am afraid to tell her. What if she rejects me?”

Unless he uses protection not only can he transmit the virus to his partner, but he is also in danger of becoming re-infected with another strain of HIV if his partner is also HIV positive.

Many teenagers, including those living with HIV, are hesitant to discuss their sexual behaviour with their service providers. The study found that counselling by service providers in Uganda is often inadequate.

The young people surveyed felt that they were being lectured and not given a chance to discuss their own views. Indeed, sometimes providers talk to parents or guardians rather than the child. Counsellors often warn youngsters against sex, relationships or dating. The emphasis is on abstinence until marriage for all young people – regardless of their HIV status.

It seems clear that further interventions are needed to realise the dream of an HIV-free generation in Uganda. The Population Council’s research points to a dearth of appropriate information and advice for positive teenagers. They need to be equipped to negotiate their lives at this pivotal time – to make informed choices and to balance responsibility with their sexual desires.

This article has been shortlisted for Oxfam’s Susie Smith Memorial Prize . The winners will be announced in May 2008.