You are here: Home » Blogs & features » Print features » Uganda’s battle to get pills to patients

Uganda’s battle to get pills to patients 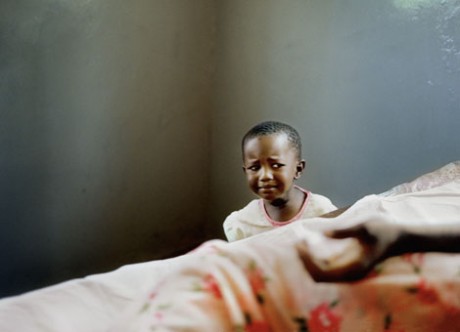 In Uganda donor money has secured HIV treatment for tens of thousands of people. But corruption has led to drug shortages while poverty and fear deter many from seeking treatment.

When I arrive at Teresa Ntamalengero’s home in central Uganda on a cold afternoon, a sombre aura hangs over the compound. The men are chatting in hushed voices, the women are huddled up on a bench, and the children stand quietly holding the bicycle rims they use as toys.

Inside her mud and wattle house measuring six by four metres, Teresa is helping her daughter Janet to sit up with the help of two neighbours. Teresa is 63. Her daughter, Janet Nakyanzi, is 28 but has lost so much weight she looks more like a child. They are both HIV-positive and they need antiretroviral drugs.

The younger woman’s health has deteriorated more rapidly than her mother’s. “She is very sick and we both need treatment but as you can see, I have nothing,” says Teresa. Teresa attended two of the three mandatory training sessions needed to receive treatment; she did not make it to the third because she could not afford to pay for transport to reach the clinic. She had spent the afternoon trying unsuccessfully to raise the fare to take her daughter to hospital.

Teresa’s nearest facility, Bbaale County Health Centre IV, is 24 kilometres away. Kayunga District Hospital is 22 kilometres away. A return journey to either hospital costs 3,000 Ugandan shillings. There is a health centre three kilometres away but it does not have an HIV clinic despite serving more than 50,000 residents.

Officials estimate that a million Ugandans are living with HIV, the virus that causes AIDS. Of these, an estimated 200,000 are in the advanced stages of the virus and need antiretroviral therapy (ARVs). About half of these are getting the treatment.

Uganda’s 290 sites accredited to provide free ARVs are mostly government, mission and private hospitals and county-based health centres. One challenge, however, is that many patients are like Teresa – too poor or too weak to make it to these facilities.

“If at least our local health centre could get an AIDS clinic at least once a week, that would bring services closer to those who need them,” says Yekosophat Bogere, a local counsellor and HIV and AIDS activist. Bogere is chairman of the 100-member Nakabango AIDS Patients Support organisation (NAPSU), which he founded in 2000. He has won national recognition for fighting the stigma still surrounding HIV and AIDS and for encouraging people in his sub-county to take an HIV test.

Bogere’s other big challenge has been the reluctance of people to begin taking drugs. Medical authorities say anyone with a CD4 cell count of 200 or less ought to start on ARVs right away. But when antiretroviral drugs funded by the World Bank first arrived at Kayunga District Hospital in 2005, they were met with scepticism. People who knew they were HIV positive were too scared to go for the blood test to determine whether they needed the new drugs.

Bogere remembers locals saying ‘those drugs are going to kill you; once you start them, that will be the end of you’. Despite this he persuaded four members of his organisation to take the CD4 test. After that, however, two of them refused to begin treatment, scared by the myths in the village. “The two who refused to take medicines died within less than one year,” he says. “But the two who accepted ARVs are alive and doing very well.”

Bogere says villagers report any patient to him who is not taking the ARVs according to the strict guidelines. “I know that the money for the drugs comes from America and other rich countries. I feel very bad when I see a patient not taking the drugs according to instructions because the rich nations are helping us with medicines without which we would be dead,” he says sombrely.

Nearly all the money used to provide free HIV drugs comes from donor countries. According to Dr Elizabeth Namagala, a coordinator in the ART Division of the ministry of health, about 75 per cent of Uganda’s ARV budget is supported by the US Presidential Emergency Plan for AIDS Relief (PEPFAR) and the Global Fund to Fight Malaria, AIDS and Tuberculosis set up by the G8 countries in 2001. The remaining 25 per cent comes from various international NGOs working either directly or through local organisations.

Patients reap the benefits of medication while the donor funding is flowing but are vulnerable if it dries up. This year patients have been feeling the knock-on effects of a political scandal in 2005 which saw five grants worth US$367 million from the Global Fund suspended after accusations of serious mismanagement. When the grants were suspended, the government insisted that people receiving ARVs would not be affected. However, officials now admit that the suspension led to drug rationing and eventually created a shortage as the country’s buffer stocks were used up.

“Because of the breakdown we had in our supply [due to the suspension of the Global Fund], people have not been able to recruit new patients in the last three months,” says Dr Namagala. Bogere has seen the effects first hand, “My neighbour was supposed to start on drugs in April but she could not,” he says. “Now she has been told she may start next week. Patients already on treatment are getting enough for two weeks instead of a full month.”

Many analysts, appalled by the corrupt officials seen as having stolen drugs of their dying countrymen, welcomed the suspension and subsequent judicial investigation. But some also question the priorities of a government that cannot treat its critically ill citizens.

HIV and AIDS activist Rubaramira Ruranga, a retired army major, has lived with HIV for more than 20 years. “I think governments in Africa are not focused because much of their money goes into defence,” he laments. “Uganda [from its own resources] does not have a budget for HIV/AIDS; we are depending on the mercy of the donors.”

Government health expenditure in the 2005/06 financial year was 240 billion Ugandan shillings, excluding project funding by donors. Donor-supported health projects that financial year amounted to 256 billion. Together, this was 13.7 percent of the national budget, which dropped to 8.6 percent for the 2006/07 financial year. Both these figures reveal Uganda has not met its pledge under the 2001 Abuja Declaration to spend 15 per cent of its budget on the health sector.

Asked about the government’s plans to fund healthcare, Uganda’s junior health minister Emmanuel Otaala argues that donor funding does in fact make its way to the government budget before being spent on healthcare. “According to our long term institutional arrangement, all money from donors will come as budget support and will be mixed with ours to form a basket,” he says. “So you can’t say that the government is not funding ART.”

Minister Otaala says he is optimistic that the treatment programme is on a firm footing. The government’s priority now is to get more people on to the programme using a mass door-to-door campaign that encourages Ugandans to test for HIV and know their status.

Activists argue there are areas in which the rich countries must improve or push governments for improvement. Major Ruranga for instance feels that donors must find ways to listen to the voices of the programme’s end users and grassroots organisations. This argument is based on the suspicion that governments give a distorted view of the situation on the ground.

Another criticism relates to the healthcare infrastructure. Instead of supporting the better established health centres, some donors prefer to work through particular NGOs. Beatrice Were, another of Uganda’s leading HIV and AIDS activists, argues that while this approach is delivering a good service to desperate Ugandans, it is simply not sustainable.

“They need to strengthen our healthcare system instead of creating a parallel structure,” she says. Consequently, she says, Ugandans are not assured of availability of drugs if a donor turns off the taps. “The donors need to continue supporting us but they also have a duty to challenge our governments to show concrete plans of how to take over in the long run.”

A version of this article appears in Uganda’s Weekly Observer.