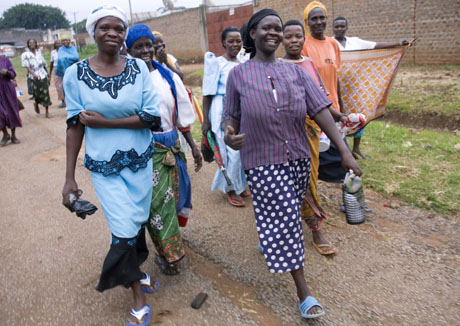 Female coffee sorters, part of the Gumutindo co-op, on their way to the sorting house at Mbale / Karen Robinson - Panos Pictures

Farming cooperatives fell from favour in the 1990s, marred by mismanagement and fraud. But dismayed by the free market, a new generation of small farmers are reviving the movement.

Overgrown coffee trees interplanted with bananas form a bushy enclosure around Specioza Kanyawengye’s house in Bugamba sub-county in Uganda’s Mbarara district. She uses every little bit of space on her one-acre piece of land to grow a number of crops both for subsistence and for money.

Kanyawengye has been growing coffee together with her husband for close to twenty years but has only a mud house to show for all her hard work. Her children go to a nearby primary school where education is free thanks to the government-funded universal primary education scheme. But Kanywangye already worries about secondary school fees. “I am not sure if we will get money to send them to a secondary school,” she says. “Money from coffee is very little and by the time it comes, I have accumulated debts, which I have to pay off, and the cycle continues.”

In sharp contrast Kennedy Muhigo, a coffee trader in the area, maintains two houses; one in Bugamba and another in the nearby trading centre of Nyeihanga, homes considered luxurious by village standards. He owns three trucks and sends his children to some of the best schools in the country.

Muhigo does not own a coffee farm. He is a middleman who makes his money by buying small quantities of coffee from farmers and selling in bulk to coffee exporting companies, “I literally move from one corner of the region [to another] looking for good quality coffee,” he says.

Millions of Ugandan small farmers grow cash crops such as coffee, cotton, and tea, and believe their efforts to free themselves from poverty are being frustrated by middlemen. “Farmers are desperate for money and some sell their coffee while it is still in the field at very low prices only to realise their mistake after prices shoot up soon after harvest,” says Grace Bwire, the chairman of Bugamba sub-county council and also a prominent coffee farmer. “Middlemen can pay 20,000 shillings (US$11) for a 60kg bag of unripe coffee that would ordinarily be sold at 70,000 shillings (US$38) once it ripens,” he says.

What’s worse, according to Bwire, is that some traders take advantage of farmers’ illiteracy to persuade them to enter into rogue contracts. “In contracts the middlemen will state they have lent money to farmers and used coffee as security, when the actual negotiations were about buying coffee.”

Kennedy Muhigo insists he does not cheat farmers. “I mainly buy coffee at the mill and sometimes from smaller middlemen,” he says. If such things are happening, he says, they are the acts of smaller middlemen who are also trying hard to survive in the market. Muhigo believes his wealth is a result of hard work. “If I did not buy [the coffee], they would remain stuck with it.”

According to Osbert Nuwagaba, who runs a motorcycle hire service (locally known as boda boda) in Nyeihanga trading centre, today’s middlemen jealously guard their local market.  “Middlemen here have chased away coffee buyers from Kampala offering higher prices,” Nuwagaba said. “They are comfortable in a market where their set prices prevail.”

His comments are supported by Grace Bwire who accuses traders of conniving to keep coffee prices low. He believes farmers today are easily exploited because they lack collective bargaining power.

Until the late 1980s and 1990s, farmers sold their products collectively through cooperative societies. Cooperatives had first emerged in the 1930s as organised farmer’s groups but over the years, government interference, mismanagement, fraud, and pressure from donor agencies combined to discredit them.

Bwire admits that cooperatives also bought coffee at a fixed price but says those prices were higher and did not fluctuate as often, partly because government subsidies protected farmers against changes on the world market.

“Although the cooperative union would take long to pay, it would pay good money,” he says. “The current price fluctuations by wide margins, makes planning very difficult. Growing coffee has turned into a betting game.”

The liberalised market was supposed bring more players scampering after farmers’ produce, offering them higher prices. Fred Byakatonda, a former director of Banyankore Kweterana Cooperative Union said farmers initially enjoyed getting cash upfront when they had previously had to sell on credit to the cooperatives. But the promised higher prices did not necessarily materialise and farmers lost access to finance which had once been provided by cooperatives’ crop finance schemes. “Farmers were left stuck with produce,” says Leonard Msemakweli, the general secretary of the Cooperative Alliance, a movement which is championing the return of cooperatives.

Cooperative unions used to buy produce from every corner of the country, whereas private companies were mostly interested in buying coffee from farmers near their processing plants. “Farmers producing less than 10 bags of coffee could only attract middlemen and not large-scale buyers,” he adds.

Msemakweli says it was erroneous for the government to believe a perfect market would develop soon after liberalisation. “There is a big gap between theory and practice,” he says, “The thinking assumed a perfect market where farmers were better informed on prices and easy access to production areas, which was not the case.”

While farmers complain of constant price fluctuations, the government says there is little it can do. Silver Ojakol, the acting commissioner for external trade in the Ministry of Trade, said commodity prices on the world market are determined by forces of supply and demand plus a number of other factors such as weather and consumption trends.

“Most companies involved in the coffee business are private and are not compelled by government negotiations,” he said. He pointed out that the World Trade Organisation  negotiates trade regulations such as access to the market but not prices.

The Ugandan government is again looking to the cooperative model to improve farmers’ incomes. The government, through its ambitious ‘prosperity-for-all’ programme encourages subsistence farmers to set up savings and credit cooperatives which will later attract state funding. It has so far committed 20 billion shillings ($10 million) to the project.

Fred Mwesigye, the commissioner for cooperative development, said the government will remain on the periphery. “The government will only help them build capacity to improve marketing of farmers. The strategy has worked and some of the cooperatives that started small have grown big,” he says.

The Uganda Cooperative Alliance is training small farmers to organise themselves into groups with a collective voice. “We want to develop a marketing system that is relevant in a liberalised economy,” says Leonard Msemakweli. “The best way to fight poverty is to deal with organised groups of people.”

The organisation started out with eight savings and credit cooperatives in 1998 but it has grown to more than 700 societies. “We have learnt from our past mistakes,” says Msemakweli,  “The cooperative model was mismanaged but it does not mean it is bad.”