Uganda’s elections: a game of football? 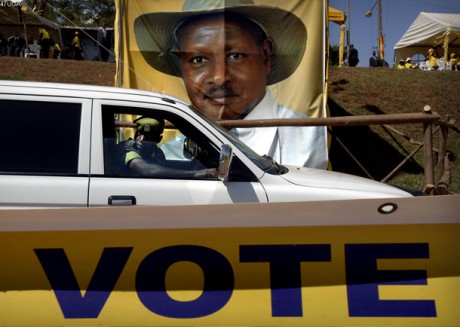 Richard M Kavuma offers a compelling insight into the Ugandan election campaign of February 2011, which Yoweri Museveni won by 68% of the vote, asking whether the best team wom, or whether it’s simply a case of the match being rigged.

Football is Uganda’s favourite sport and politicians know the power it has to boost popular opinion. Even the president, Yoweri Museveni, has been known to take to the pitch, especially when elections campaigns are approaching.

In most matches a team generally wins because it is: a) good or b) the other team is bad. In some cases it could be a combination of the two, providing a particularly thumping victory.

But there also can be another reason, namely a bad referee either willfully or mistakenly allowing or disallowing goals or penalties, making it difficult for anyone to know whether the best team has in fact secured victory.

The main contest in this month’s electoral football is between retired General Yoweri Museveni, who has ruled Uganda for 25 years, and retired Colonel Dr Kizza Besigye, a former political ally and personal physician of Museveni’s.

Polls in Uganda’s national press show Team Museveni leading with as much as 67 per cent, against Besigye’s 19 per cent. So why is the president and his party, the National Resistance Movement (NRM), expected to capture such a large chunk of the vote?

Scenario A: is Team Museveni that good?

There is little doubt that Uganda’s economy has performed impressively under Museveni, averaging 7 per cent growth per year between 1997 and 2007.

Last October the poverty headcount was announced to be 23 per cent, according to the Uganda Bureau of Statistics figures, down from more than 56 per cent in 1986, when Museveni seized power after a five-year guerrilla war.

In 1997, the government – supported by donors – introduced tuition-free primary education, leading to tripling of enrolment; and free secondary education followed in 2007. And apart from northern Uganda, which suffered two decades of brutality at the hands of the Lord’s Resistance Army, most parts of the country, notorious for insecurity during the Idi Amin era and in Museveni’s subsequent guerrilla war, have experienced relative stability.

Museveni has been building his campaign around poverty reduction, and money for farmer-related schemes has increased in the last two years. The government has also proposed a scheme of giving direct cash transfers to the very poor and vulnerable elderly.

However, successive UNDP Human Development Reports have warned about the widening gap between the rich and the poor. In the past this has partly been due to the insecurity in the northern part of the country and also low investments in agriculture. But the war in the north now appears to be over, although the LRA is still in the jungles of the Central African Republic and the DR Congo.

Concerns remain about such issues as widespread rural poverty, and poor quality of services like education and healthcare. High-level public corruption is endemic, with donors repeatedly accusing Museveni of lacking the will to tackle it.

Only last month, the government wired USh20 million ($8,700) to the bank accounts of each MP at a time when the passing of a controversial law was in the balance. At first, both the central government and the Parliamentary authority denied being responsible for sending the money. Later the Ministry of Finance said the money had been given to the MPs to help monitor a government agriculture scheme.

Opposition MPs returned the money, seeing it as a bribe. Similarly in 2005, as Parliament debated a bill to abolish presidential term limits and allow Museveni to run for a third term, MPs also found money from the government in their accounts. Critics claimed the money was meant to help MPs make up their minds if they were in any doubt about which way to vote.

With this mixed record behind him, it seems unlikely that a Museveni victory would be based solely on an excellent performance.

Scenario B: a poor opposition team?

So far the political opposition has not done much to prove that it can wrestle the trophy from defending champion Museveni. Many of the opposition parties are weak, dogged by internal factions, and have no strong presence in the grassroots, outside the capital and major towns and urban centres.

Last year, the opposition attempted to form an alliance, the Inter-Party Cooperation (IPC), with a view to fielding joint candidates for presidential and parliamentary elections. But from the outset, the Democratic Party, founded in 1954, refused to join the IPC. Then the 50-year-old Uganda People’s Congress (UPC) withdrew from IPC after various disagreements. This left the IPC with the Forum for Democratic Change (FDC), the largest opposition party led by Besigye, and three other smaller parties. So there is plenty of evidence that weakness and lack of unity in the opposition play into the hands of Team Museveni.

Museveni has systematically worked to deny the opposition operational space. Upon capturing power, political party activities were banned – except those of NRM – and this ban remained in place for 19 years. Even after they were allowed to operate, parties have had their rallies banned and disrupted by security forces. Besigye’s team has also had trouble accessing radio airwaves especially in the more rural areas (where 70 to 80 per cent of the population live). Fearing victimisation by the NRM, some radio station owners refuse to host opposition leaders.

Fear of victimisation also makes it hard to raise party funds, as people fear openly donating money to the opposition.

Besigye ran against Museveni in 2001 and 2006 and in both cases faced heavy persecution from the government. He was put under house arrest in 2001 and arrested for alleged treason and rape charges just before the nominations for the 2006 elections.

The odds are stacked against Museveni’s opponents, yet the parties have made some gains: in the 1996 presidential elections, Museveni won with 75 per cent of the vote; five years later it had shrunk to 69 per cent of the vote, while in 2006, it had fallen to 59 per cent.

Uganda’s Electoral Commission (EC), which acts as the referee in the elections, has been hugely discredited, having been found to be responsible for irregularities in the 2001 and 2006 elections. The opposition has demanded that the EC be disbanded and replaced with a neutral body but to no avail.

In a report to Congress in April last year, American Secretary of State Hillary Clinton indicated that the current electoral commission lacked the credibility to hold a free and fair election. But Museveni, who appoints the commissioners before they are approved by a Parliament dominated by his party, denies any rigging. In fact, in a recent newspaper interview, he claimed that it was the opposition that was guilty of rigging.

This year, the European Commission is supplying 34 long-term observers and 68 short-term observers to monitor the polls. But Uganda’s Electoral Commission has controversially ruled that it will not be necessary to show identification, such as a voter card, when voting, leaving the poll open to abuses such as multiple voting and ballot box stuffing.

So as the election approaches it looks as though Museveni has ensured it won’t be a level playing field: the opponents are playing with their hands tied, under a referee not only chosen by Museveni but who has demonstrated incompetence in the past.

Under such circumstances, not only is it very difficult for the opposition to win, it is almost impossible for Museveni to lose.

All our journalism is free to reproduce, unless otherwise noted. Please get in touch with info@panos.org.uk for more information or to let us know that you’ve reproduced something.