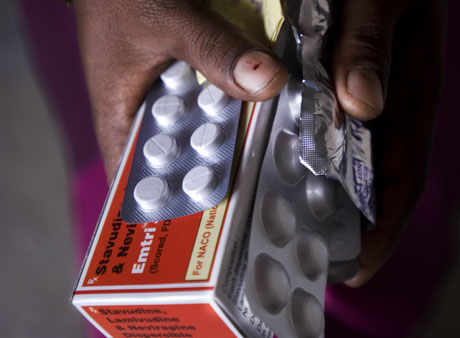 Can the UN targets for universal access to treatment be met? / Atul Loke - Panos Pictures

Promises made and never fulfilled? Are commitments made at the UN General Assembly Special Session (UNGASS) on HIV and Aids a waste of time?

These were the questions on the lips of almost everyone who attended a session on  ‘Where Are We In Achieving UNGASS Targets?’. Delegates debated the effectiveness of the UN’s targets on universal access to treatment.

“Two years ago, national governments promised to scale up access to prevention, treatment, support and care. We can’t lose momentum now as we have tangible reports that 130 countries have put in place national strategies in HIV with 105 of these setting national targets.

“We now have evidence of the reduction in new infections, reduction in mortality, and three million people on antiretroviral therapy. And you want to give up on that now?” questioned Sidibe.

Delegates raised concerns on the failure by UNGASS to name and shame countries lagging behind in the universal access targets, and called for new strategies to ensure national governments fulfilled promised made.

The only key challenge with UNGASS, implored Sidibe, was failure to quicken the pace of reaction by governments and said if the pace was not quickened, there would only be 4.6 million people globally on treatment instead the targeted 8.6 million people.

“Only 21 million pregnant and HIV-positive women would be on the prevention of mother to child transmission programmes instead of the targeted 78 million if we continue on this slow pace.

Only 24 million people would be tested by 2010 instead of the targeted 64 million. We must all ensure that this works by building appropriate relationships in order to deliver,” said Sidibe.

The net result, he said, would be missing both the 2010 targets and the millennium development goals, a situation that could not be tolerated.

Sidibe deplored the lack of HIV strategies involving the community of people living with disability.

“We have completely failed the disabled community that ironically constitutes 10 per cent of the world’s population, with 650 million people. There are no strategies, no funding for HIV programming for the disabled and there is no research or data to assess the impact of HIV amongst the disabled. We have failed but now we will push for the involvement of the disabled,” said Sidibe.

Concerns were raised from delegates that while civil society was called to present reports on UNGASS, they were never used.

The exclusion of marginal populations like commercial sex workers, men having sex with men, injectable drug users and the disabled in UNGASS reports, despite evidence that HIV was rampant in such groups, was cause for concern amongst delegates.

Lesotho Minister of Health Mphu Ramatlapeng reiterated that UNGASS was indeed helpful and outlined her country’s strategies as it scaled up efforts to meet the targets. She, however, bemoaned the limited funding accorded to her country saying that would greatly impact in failing to reach the 2010 targets.