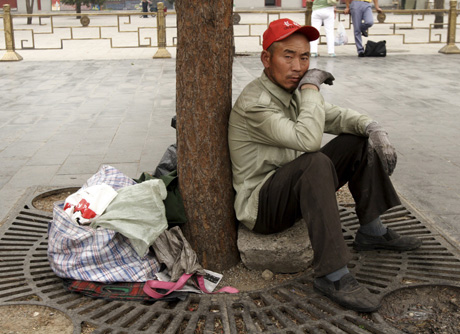 A migrant worker rests with his belongings in Beijing. A new report says that rural-urban migrants are less happy than those that remained / G.M.B. Akash

In Great Expectations: The subjective well-being of rural-urban migrants in China, researchers estimated people’s happiness by using a set of individual, household and community characteristics to predict individual happiness scores. They found that migrants who had moved from rural to urban settings scored lower on the scale than those who had not moved.

“The results were surprising as economists generally assume that income is important in raising happiness and that people migrate to improve their lot,” says one of the authors of the report, Professor John Knight, a retired professor of economics at Oxford University. “They are expected to be happier after the move, once they have settled down.”

However, the report found that even though rural to urban migrants tend to earn more money than before they are less happy.

There are now over 130 million rural to urban migrants in China. With such large numbers of people moving, the report suggests happiness in an important factor in social well-being.

The study was based on a 2002 survey carried out by the Chinese National Bureau of Statistics. The survey contained questions about households and their members. Information on issues such as spending habits and housing conditions as well as migrants’ attitudes and perceptions, were collected and quantified. Migrants were asked to rate their happiness on a scale from 0 (‘not happy at all’) to 4 (‘very happy’). The report was published this month by the World Development Journal.

The influence of neighbours

According to the report, rural-urban migrants do not represent rural society as a whole. One of the suggestions given by the report is that people who migrate have different characteristics to people who stay in the countryside and show no desire to migrate.

“For instance, migrants may be more educated, or young, or male, or naturally unhappy, or have high aspirations which need to be fulfilled,” suggests Prof Knight. “We can standardise for the first three characteristics but not for the last two.”

When migrants move from rural areas to urban areas, their perception of what counts as a good wage also changes. Although many rural-urban migrants earn more money than their rural peers, the study argues that this does not have a significant impact on happiness levels. Once they move to cities and towns they compare themselves with new urban social groups they encounter rather than with their old rural peers.

As migrant groups compare themselves to their new peer groups in urban areas, their aspirations inevitably rise, the report found. Over two-thirds of the migrants who reported that they were unhappy or not at all happy gave low income for their unhappiness, suggesting they were comparing themselves to their urban peers.

The study concludes that while “migrants could predict that their incomes would rise, they did not account for how their aspirations would rise as they become a part of a different urban society”.

The expectations migrants have of urban living conditions also contribute to their greater comparative unhappiness. For example, the report finds that migrants expect heating in urban housing but often their accommodation doesn’t have it. The “mean migrant happiness score would rise by 0.09 if the migrants had heating”, the report found.

According to the report, “[t]he unsatisfactory conditions in which migrants live in [compared with what they expected them to be like] and the unpleasant and insecure nature of their employment depress migrant happiness.”

Lack of information on urban living conditions and expectations of rising aspirations should be considered by potential migrants.