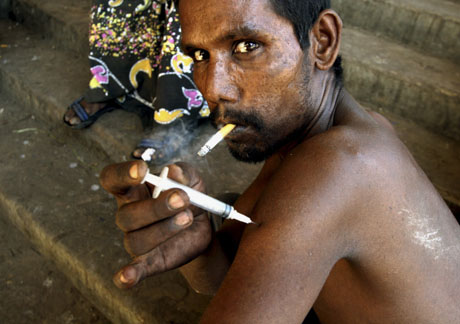 Pakistan’s drug users are shunned, forgotten and last in line for HIV treatment.

Thirty-year-old Fayyaz – an injecting drug user who has HIV and TB – is homeless.

“I live on the streets,” he says. “My brother and his wife refused to let me stay with them when they learnt I have been taking drugs. They feared I would pass on my habit to their young son.”

Eight years ago, Fayyaz was a resident of Orangi, a low-income neighbourhood in Karachi. Today, he lives on Burns Road, where the highest number of injecting drug users (IDUs) from different parts of the city, are concentrated.

The majority of IDUs who live on the streets inject drugs in groups. The lifestyle of IDUs makes them vulnerable to TB. Sharing needles increases the risk of contracting HIV and, subsequently, tuberculosis (TB).

The highest risk, the least care

According to the second generation surveillance report on HIV/AIDS 2006-2007, Pakistani IDUs are the highest risk group in the 12 cities selected for surveillance. The total number of IDUs, according to the research, was estimated at 31,000.

Lahore, Faisalabad, Gujranwala, Peshawar, Bannu, Hyderabad, Quetta, Sukkur, Multan and Sargodha are some of the other major cities in Pakistan where IDU populations are at high risk due to their sexual relationships and their living conditions.

Official statistics from Sindh AIDS Control Programme (SACP) also reveal that from the reported 4,502 HIV positive cases, 1,700 belong to Karachi – most of them are IDUs.

According to SACP’s research, HIV prevalence among IDUs in Karachi jumped from 0.4 per cent in January 2004 to 26 per cent in 2005, indicating a shift from “low prevalence” to a “concentrated epidemic”.

A study carried out by the Marie Adelaide Rehabilitation Centre, Burns Road, Karachi further confirmed this.

However, despite the alarming statistics, it is mostly NGOs or doctors at private hospitals who perform the task of collecting blood samples, screening for HIV, providing counselling services and motivating IDUs to benefit from drug rehabilitation facilities.

Although there are approximately 60 TB Directly Observed Treatment Short-course (DOTS) centres in Karachi, access to healthcare facilities remains unavailable to IDUs who have TB disease as they are often shunned by medical staff at state-run hospitals due to their appearance.

“There’s no point in providing treatment to these addicts because they don’t learn and will soon resume their habits,” a medical attendant at the state-run Civil Hospital in Karachi says.

IDUs are often neglected at state-run hospitals because of limited resources and the burden of treating hundreds of patients on a daily basis. Furthermore, IDUs do not comply with long-term treatment, he explains.

“The IDUs do not have proper homes or a family member assisting them during the TB treatment. So it is hard to track their record and determine the success rate of treatment among IDUs,” says Dr Naqvi, adding that it is even difficult for private doctors to make them – the patients – comply because they do not return after receiving short-term treatment. “The reason there is no exact official data on IDUs infected with TB/HIV is because most of them do not return for treatment after a few weeks.”

“In the case of infectious diseases like TB, HIV and hepatitis, it is compliance that matters,” she says. “In the case of ARV treatment for HIV positive patients, IDUs are a category most difficult to deal with because we cannot begin treatment unless the patient has maintained complete abstinence through rehabilitation for a few years.”

Dr Salahuddin added that malnutrition was another problematic factor.

“A sufficient amount of calorie intake is required when the patient is taking HIV and TB drugs. The strong medicine can have a negative impact on the body if not taken with a proper diet.”

Dr Naqvi further informs that treatment for HIV and TB has recently started in three hospitals in Karachi, one of which is a government hospital. “So far only three patients have been diagnosed with co-infection, none of which are drug users,” he says.

However, Dr Saleem Azam, Director of Pakistan Society, an NGO working with IDUs in the Federal B Area and Gulshan-e-Iqbal – low and middle income localities of the city – offers a different opinion. He believes it is psychological counselling that IDUs need the most before they can begin any form of treatment. The government should focus on counselling rather than establishing more and more DOTS centres, he asserts.

“Since IDUs have no family members, we use the ‘peer education model’ to raise awareness about infectious diseases and its consequences,” he says. Fayyaz, on the other hand, says he wants to quit the drug habit but does not know how to seek help.

Besides HIV, many IDUs are also infected with hepatitis B, hepatitis C and TB. The presence of these multiple viruses in a drug user’s body ultimately results in his or her death.

Dr Azam adds that on the ground, the reality of most programmes is saddening. Not only do the relevant officials have limited experience in service delivery for high risk groups, there is also a lack of commitment on their part.

“There are no integrated programmes for TB/HIV,” Dr Azam says. “An IDU, who cannot even afford two meals a day, cannot be expected to run around for one test after another.”

Since there is no synergy between the two programmes, an IDU will first have to register as an HIV patient and then go through the entire procedure of registering as a TB patient for free medicine.

Moreover, after contracting HIV, it is difficult to convince drug users to take preventive measures for TB. In most cases, they are reluctant to try because they have lost hope.

“Who would I want to live for?” asks Sajid, an IDU who tested positive for HIV recently. “It’s not like my family would accept me now if I give up the habit and return to them.”

Psychologists cite rising unemployment and political instability in the country as two of the main reasons behind the psychological stress that has resulted in the increasing number of drug users, including women who are hidden from public view.  What is even more worrisome is the involvement of young people, mostly street children, who are gravitating towards substance abuse.

The mortality rate among IDUs in Pakistan is the highest among vulnerable groups. Since many are abandoned by family once the habit kicks in, they end up having no family to care for them when they get ill.

“The Edhi morgue in Karachi receives 50 nameless bodies every day from different parts of the city,” reveals Dr Azam.

“When buried, there is nothing inscribed on their tombstone either. They die the most unfortunate death.”

Most of the time it is difficult to ascertain the cause of their death because IDUs are not registered in government-run TB or AIDS control programmes.

“Despite the fact that IDUs have been identified as the highest risk group, government projects are not focusing on this segment of the population,” says Dr Shaikh.

Dr Qamar Abbas of SACP, however, assures that the five-year World Bank AIDS control programme (2008-2013), launched in July 2008, will focus on high-risk population groups, including IDUs, sex workers and inmates.

But while they wait, IDUs continue their high risk behaviours.

“We don’t have the money to buy a condom,” claims Fayyaz’s friend, who accompanied him for the interview. He says he knows using condoms would prevent transmission of the disease.

When asked why he could not use the money he earns from begging and selling his blood, to buy a condom, he laughs, “I would rather spend that money on drugs”.

Please note, names have been changed to protect identity.