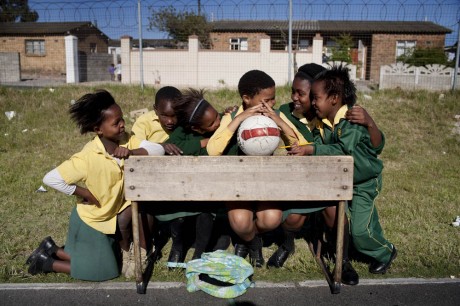 Pulling a bright green bib over her school uniform, 13-year-old Likhona Blanket prepares to join her team of seven female football players on a bumpy patch of grass in a school yard in one of Cape Town’s poorest communities.

The girls are part of an after-school football programme at the Hlengisa junior secondary school in Nyanga Township which uses football to teach them about HIV. 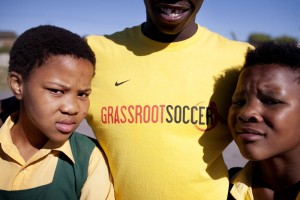 The programme, called “Skillz Street” was developed specifically for girls and is run by the NGO Grassroot Soccer two afternoons a week. It combines activities-based HIV prevention and life skills. 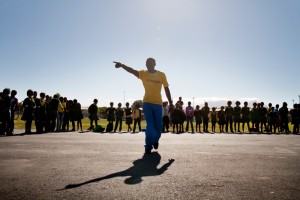 Grassroot Soccer uses the power of soccer to educate, inspire, and mobilize communities to stop the spread of HIV. Andile Rafeni has been facilitating at the organization for 3 years - Nikki Rixon | Panos London

There are ten coaches who split their time between the classroom, where the girls set goals for their lives, and the pitch, playing football with a message. The programme has been rolled out in 12 other African countries and in seven towns and cities across South Africa.

One of the lessons is about stigma.

“We go onto the football field and have half the girls stand in a line next to each other and pass the ball behind their backs,” explains football coach Mfundo Gana. “We ask the other half, who are watching them from the front, who has the ball and they can’t tell us because they can’t see it. The message is that you can’t tell if someone has HIV, so stop the discrimination,” says Gana. 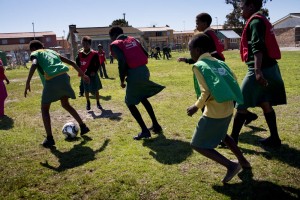 Teaching girls how to play football – usually played and watched by men – is also part of the programme’s bid to reduce sexual and gender-based violence by changing male-dominant gender attitudes.

Nyanga is one of Cape Town’s oldest townships (areas which under apartheid were reserved for black people only). Small and aging apartheid government-built four roomed houses jostle for space with thousands of one or two roomed tin shanties and a few newer apartment blocks built since 1994.

Schools with swimming pools and well-manicured playing fields are a feature of Cape Town’s suburbs, not of townships like Nyanga. Here the girls make do with a large patch of grass and a few colourful plastic cones set up as goalposts.

Coach Andile Rafeni says that before Grassroot Soccer came to the school almost two years ago, the pupils had nothing to do when school ended at 2pm every day.

Rafeni stands on the sidelines energetically cheering his team on and when they score a goal, he throws himself down on the field and the pupils pile on top of him cheering.

“We’re also teaching them to play fair. This is a metaphor for building healthy relationships in life. You can see there is no adult referee in these games. We teach them how to resolve their own issues without older people directing them. We want these girls to be very confident in life. This will help them avoid risky behaviour.” 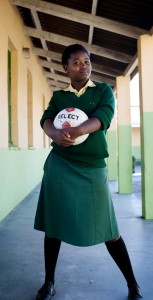 Next year The London School of Hygiene and Tropical Medicine is due to start a three-year trial in partnership with Johannesburg’s University of the Witwatersrand to measure the impact of Grassroot Soccer’s work.

“The study will actually be able to give us information on HIV incidence and more detailed behaviour impacts, a first for a ‘sport for development’ organisation and one of only a handful of school-based HIV prevention programmes,” says Grassroot Soccer’s director of programmes, James Donald.

Likhona says the programme has taught her “how to score goals and how to protect myself from HIV at the same time.”

“But HIV is not really a big problem here for kids my age,” she adds. “The biggest problem is young people smoking drugs.” 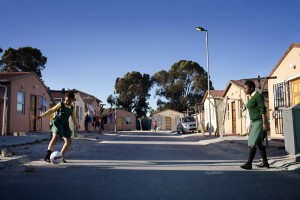 Phakama Mndebe, a 16-year-old pupil in grade nine, agrees that HIV is not really a problem. For her it’s teen pregnancy. “There are so many 16-year-olds getting pregnant. Skillz Street teaches us how to respect other people but also how to speak up for ourselves,” she says.

Thembisa Ngamalana, director of the Grassroot Soccer’s Skillz Street Programme, explains that unfortunately HIV is a big problem, even among primary school girls who are not sexually active, because of the high rape rate in the area.

Many pupils are reluctant to talk about this, especially with strangers, but often end up confiding in Grassroot Soccer’s social workers during voluntary counselling and testing sessions.

Pupils as young as 12 years old tested positive for HIV during a recent voluntary counselling and testing session, Ngamalana says. Some were born with the virus but were never told.

“Parents are used to hiding their HIV status from children. Even if children were born HIV positive, their parents didn’t tell them. There is a very high crime rate here. Kids get raped and don’t tell their parents because whenever parents don’t talk about personal things with their kids, the kids won’t tell them about their problems either.”

Part of the programme is to encourage children in grades four to eight (10 to 14 year olds) to always be there for each other if they have problems, she adds. 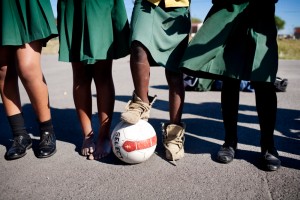