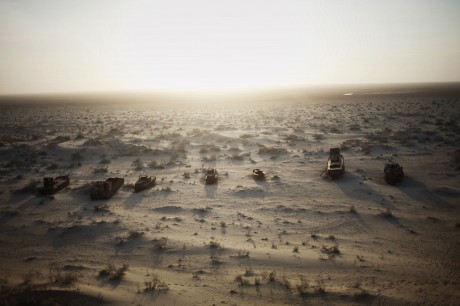 “When I was a child, standing on the banks of Amu-Darya you could hardly see the other side. We used to have many gardens and fruit trees all over the place. These days the river looks like an irrigation canal and only a few gardens are left,” says Rustam Jumaniyazov, a 40-year-old farmer from Khorezm in north-western Uzbekistan.

Khorezm, in the Aral Sea region – where summer temperatures reach 45°C – serves as a cautionary tale of water exploitation. In the 1960s, Uzbekistan, which was then part of Soviet Union, installed extensive irrigation systems to enable an immense increase in cotton production.  Two rivers that ran into the Aral Sea were diverted, causing it to shrink by two thirds.  Already arid soil became salinised and the land was degraded. The Aral Sea disaster became a classic example of man-made damage to the environment.

Yet 20 years after independence, agricultural practices in Uzbekistan – the second biggest cotton exporter in the world after the United States – have hardly changed.

“The experience of many farmers, dates from the old time, which was valid then, given their large-scale production systems but inefficient for small-scale farming.” says John Lamers, the coordinator of a joint German-Uzbek research project into sustainable land use, based in Khorezm’s Urgench city.  “If Uzbek agriculture wants to become competitive internationally, it has to adapt.”

The project is funded by the German Ministry of Education and Research (BMBF) and implemented jointly by the Center for Development Research (ZEF) at Bonn University in Germany, UNESCO and the Uzbek Ministry of Agriculture and Water Resources. They have been developing sustainable land and water use methods, in part, through planting trees on degraded, marginal cropland inside the irrigated farming areas.

The project findings could be of use not only for Khorezm, but for similar regions in the irrigated lowlands within the Central Asia and the Caucasus drylands. According to local estimates, up to 20 per cent of land in Khorezm is now unsuitable for cropping.

Project photographs of a two-hectare research site in Yangibazar district from six years ago show a field apparently covered in snow.

“This is not snow, but two to three centimetres of salt on the topsoil,” says Lamers. “We said to ourselves – if our systems work on this land, they will work elsewhere.”

Now the field is filled with trees. “You should come in May. When the trees are green, you can see the real scope of transformation,” he adds.

Trees need up to 80 per cent less water than annual crops during their first two years, and then draw upon groundwater from the irrigated fields nearby. Another advantage is that farmers can make money through selling fuel-wood, fruit and fodder every year. But first tree planting practices must change.

“In Khorezm, the average distance between fruit trees is eight to 10 metres,” says Lamers. “We suggest, for instance that farmers plant trees on marginal cropland two metres from one other. Why? Because one to two years after planting they can harvest the trees, perhaps even remove entire rows. In five to seven years, the fruit trees will be at same density they are used to but during these years they will have annual products.”

Sixty per cent of the Uzbek population lives in rural areas, with around 80,000 farmers registered in 2010. Farmers are officially private operators, but in practice they lease the land from the state for up to 50 years.

The state controls agriculture production, accounting for one-third of the country’s GDP and the farmers are given quotas for cotton and wheat production by the government. They need guaranteed support from the local authorities that the marginal croplands, officially designated for crop production, can be used for afforestation several years in a row.

Trees can also potentially capture carbon dioxide and store it as carbon for carbon credits to be sold to developed countries under the Clean Development Mechanism.

“Generally dryland afforestation is not widely represented on the global agenda, because it was assumed its potential is low in comparison with tropical forests. But there are also studies that prove the opposite. On our tree plantations we are going to test the potential of Uzbekistan to participate in the global effort of carbon sequestration,” says Khamzina.

John Lamers says one of the biggest problems, initially, was finding qualified PhD candidates studying economics and sociology in Uzbekistan. Therefore, the project focused on building local human capacity from the very start. Out of 53 PhD students who participated in the project, 24 graduated, almost half of them coming from Uzbekistan.

“In order not to lose knowledge and expertise, two years ago former students and project participants – economists, agronomists and sociologists, who stayed in the country – decided to join their efforts and formed an NGO. Now we provide advisory services to local farmers,” says Inna Rudenko, a senior researcher from Khorezm and one of the founder members of the NGO, Khorezm Rural Advisory Support Service (KRASS).

Today the new organisation is collaborating with international partners to provide scientific analysis, advice and training on agriculture and environment, as well as with Uzbek municipal administrations and farmers’ associations.

Maksud Jumaniyazov [no relation to Rustam Jumaniyazov], 47, is one of the Khorezm farmers who allotted part of his cropland for experiments.

“We have collaborated with the project for eight years now. I was very curious to see the results and I have to admit – they have broken some stereotypes. Following their advice, I started to rotate the crops and apply less fertiliser. My neighbours have seen the results and have now asked me to share this experience with them,” he says.

Convincing farmers is only half the solution. For widespread adoption, all the methods and technologies proposed by the project have to be in line with Uzbek policies and laws and need to be approved by the national and local authorities. According to Lamers they are making headway. “Several of our proposals and recommendations were officially assessed and accepted,” he says.

The final decision on whether the new ways of water and land use will be widely implemented rest with the Uzbek government. In the meantime project researchers and KRASS staff plan to develop training courses for both agriculture specialists and farmers, publish their findings, produce aid materials and collaborate further with local administrations. And then maybe farmer Rustam Jumaniyazov’s garden will tell a different story.

Komila Nabiyeva visits Khorezm in the Aral Sea region of Uzbekistan where farmers are planting trees to help reverse desertification.