You are here: Home » Blogs & features » Print features » Water everywhere but not enough to drink

Water everywhere but not enough to drink 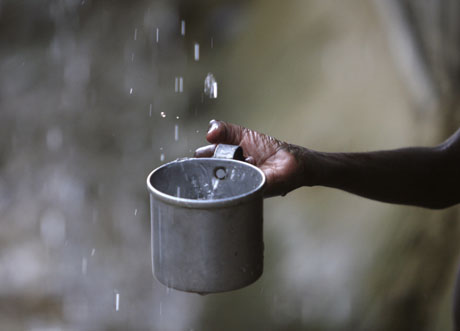 Momtaj Begum, holding her baby daughter, is among hundreds of women queuing for a pitcher of drinking water at a desalinisation plant in Tafalbaria, a remote village in the Bagerhat district in south-west Bangladesh.

‘We have to walk this long way to the desalinisation plant as the water in the pond in our village has turned too salty and muddy to drink,’ says Khadiza, a neighbour who had joined in the scramble for fresh water.

The women make several trips a day along muddy roads and paths from their home in neighbouring Khuriakhali in the Sundarbans, the world’s largest mangrove forest and a UNESCO world heritage site. Their village pond is full of water, but today not a drop of it can be drunk.

The tidal surge whipped up by Cyclone Sidr in November 2007 has contaminated the pond with salt and dirt. The nearby Baleswar River used to provide fresh water, but it is also full of salt and dirt.

Residents of coastal areas have put up with saline surface water for years, but it is getting worse. Researchers have discovered saline water further inland than in the past, as far as 130 km. This is partly because global temperature rises are causing sea levels to rise, occasionally flooding low-lying areas.

Communities along the coast are hit doubly hard. Groundwater is often contaminated with arsenic while the surface water is full of salt. The situation is acute in the 25 upazilas (sub-districts) of Satkhira, Khulna and Bagerhat. Upstream rivers such as the Ganges and Brahmaputra are struggling to wash the saline water back out to sea because their currents are getting weaker and often stop altogether in the dry season.

Commercial shrimp farming, which annually is worth billions of Bangladeshi taka, is adding to the pressure because farmers are flooding their fields with saline water to breed the shellfish.

‘It is affecting agriculture,’ says Fazar Ali, sitting in his small house in Parulia, in Sathkira. ‘I cannot grow as many crops as I did in the past. I’m trying but I cannot because of either drought or salinity. I believe it happens because of changes in the weather.’

For women it means long walks along earthen tracks and through mangrove swamps. It is common for women in this region of Bangladesh to spend three to four hours per day fetching clean drinking water, while the men have been driven out of their traditional professions of farming and fishing to search for livelihoods in the nearby forests, or they are forced to travel to towns and cities to find work.

Some reports claim women and adolescent girls no longer have enough time and energy to carry out household duties like cooking, bathing, washing clothes and taking care of the elderly and infirm. It is even affecting their marriage prospects and family lives. Families who struggle to get clean water don’t want daughters to leave their homes and marry elsewhere.

A study by WaterAid Bangladesh in Assashuni and Shyamnagar upazilas in Satkhira district claimed the skin of adolescent girls was turning rough and unattractive as a result of the saline water. It said men from outside the area had no interest in marrying these young girls and girls from poorer families were being rejected by the better-off local men.

There is also some evidence young women are being discouraged from developing relationships with men in flood-prone areas. When the NGO Care Bangladesh interviewed Padmabala Mondol, 45, from Fultola in Shyamnagar upazila she told them, ‘No decent parent wants their daughter to marry a boy from such communities. So great is the scarcity of water that, right after the wedding, the bride has to travel great distances to get water, so marriages are taking place mostly among villagers.’

International donors have advised the government in Bangladesh to undertake ‘climate-proof’ adaptation projects. Indeed, many people are already doing this at a household level. In the coastal belt, people usually drink water from ponds, sometimes purifying it with lime and medicines. Or they rely on the few water desalinisation plants operated by NGOs and government agencies.

The latest United Nations Development Programme (UNDP) report on climate change adaptation, Risks, Vulnerability and Adaptation in Bangladesh, noted, ‘Compared to many other developing or least developed countries Bangladesh is doing a lot more on climate change.’ However, it added, it was mostly ‘undertaken by a small, isolated and dedicated group of people and institutes in the NGO and government sectors. The national activities are confined to pilot scale by NGOs and private research organisations.’

But these small-scale NGO projects cannot address the growing climate-change problem. The UNDP report says large-scale engineering projects such as diverting water from the Ganges and more desalinisation plants would be most effective way to improve fresh water supplies but it rules them out on the grounds of cost.

However, Dr Atiq Rahman, co-author of the UNDP report and executive director of NGO Bangladesh Centre for Advanced Studies (BCAS), thinks it is in fact ‘very much possible’ to mobilise funds from donors for the engineering projects. However, he rules out NGO efforts as suitable for this major problem, saying the government has to be persuaded to harness technology, equipment and funds.

Earlier this year, the head of the present caretaker government of Bangladesh, Dr Fakhruddin Ahmed, told businesses and global leaders at the World Economic Forum in Davos, Switzerland, about the devastating impact of climate change on Bangladesh. He made an international appeal to establish a global fund for assisting vulnerable countries in adapting to the new challenges faced by climate changes.

Dr Atiq Rahman says it is a long shot to expect business leaders to take up Ahmed’s proposal. He suggested the government seek financial help from international donors as well as sourcing funds from the domestic economy.

Professor Mohammed Farashuddin, a former governor of Bangladesh Bank and a commentator on development efforts, agrees. He believes money from the country’s national poverty-reduction programme could be diverted into a climate adaptation scheme. However to make it work, generous grants would have to be sought from donors in richer countries.

Such a move would help to satisfy those who believe industrialised countries, responsible for high levels of harmful carbon dioxide, should assist poorer nations like Bangladesh which have polluted least but suffer most.