You are here: Home » Blogs & features » Print features » “We, the rag-pickers of Pune, are in big trouble”

“We, the rag-pickers of Pune, are in big trouble” 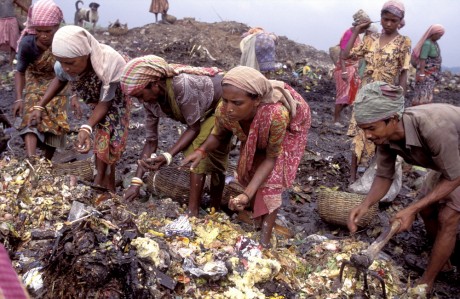 In spite of the bright red bindi, worn in the middle of her forehead, the jangling green glass bangles and her colourful sari, Suman More appears frail, tired and a little overwhelmed by all the hustle and bustle around her. But once she starts explaining her mission her eyes lighten up and her tiredness vanishes.

“We, the rag-pickers of Pune, are in big trouble. We recycle a lot and help keep the environment clean. But now we are losing our livelihood. I am here to tell the world about that,” she says without mincing her words.

More had travelled from Pune, a city of 5.5 million people close to Mumbai on India’s west coast, to Durban, to take part in the UN climate change negotiations.

“Though some of us work for the municipality, most are free roaming rag-pickers who pick up waste from every corner of the city including the city dumping grounds. But increasingly the dumping grounds are privately owned. The companies who are setting up new landfill and recycling projects are asking us not to use their dumping grounds any more. We do not have any others means to support ourselves. At the climate summit, we are asking governments to recognise our work as waste managers and recyclers and create a small fund that would help us continue our job.”

To put things into perspective, the city of Mumbai produces more than 7,000 tons of waste every day. People like Susheela and Suman form the force that collects, sorts, segregates and manages this waste to keep the city clean. Now, they are asking to be accepted as a legitimate partner by the cities in their plans to fight climate change and build low carbon environment. But do they have the skills or capacity required?

Susheela has a ready answer. “Most of us are trained in composting,” she says. “In fact more than 3,000 of us in Mumbai alone know how to set up bio gas projects. Given an opportunity we could help the government manage the waste very well. But, if the government still wants to go ahead with private companies, it can at least give us some loans, so we can set up our own recycling units and make a living.”

Both Susheela and Suman share some insights into the lives of women rag-pickers. There used to be about 10,000 of them, Susheela says, but the number has now decreased to around half that. As free-roaming rag-pickers they roughly make US$2 to US$3 a day by picking up rubbish and selling the recyclable material to scrap dealers. But due to the recent lack of access to private rubbish dumps, many women have been forced to give up their work and become housemaids. But it is a difficult deal.

“Society generally sees us waste-pickers as thieves. So, when we women go to look for work, homeowners ask where we have worked before. The moment they hear we were waste-pickers they either refuse to give us work or pay us far lower wages. So most women make only half of what they would have earned as rag-pickers.”

Susheela and Suman have found support from rag-pickers from other countries where they also face a loss of livelihood and starvation. In Durban, they have been joined by rag-pickers from Costa Rica, Brazil, Senegal and South Africa. Together they have been trying to make their presence felt by meeting people in and out of the summit, screening films on their lives and demonstrating on the street.

But it takes more than a demand to change a policy at the global level. Barely literate and without a strategy or political footing, how are the rag-pickers going to get that? Are they even being noticed by anyone?

“Here, every country is promising to reduce poverty and help poor people. We are the people from the street. We are the poorest of the poor. If nobody hears us here, who will hear us then? So, we will continue to raise our demands because we are asking for a legitimate right to survive,” Susheela says.