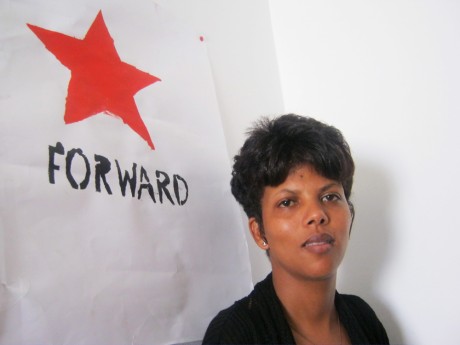 Wendy Pekeur, former head of the South African farm worker’s union Sikhula Sonke [isiXhosa for ‘we grow together’]  broke ground in a sector in which a backbreaking job is often only available for a few months of the year, where some women are still paid in alcohol instead of cash, and where the only accommodation may be a run down pigsty.

Pekeur (31) grew up on a farm, where her grandparents worked. Although she moved to the city at the age of seven to live with her parents, when she was 18 she made her way back to the farm where she still lives with her 95 year old grandfather today.

Pekeur started volunteering with a non-governmental organisation, Women on Farms, when she was in her early twenties. In 2004 helped launch Sikhula Sonke in a bid to get women farmworkers themselves to be in control of their own organisation, and their own lives.

With men making up one-third of all agricultural workers, today, Sikhula Sonke has now opened up membership to male farm workers and has become the union of choice for thousands of agricultural workers in the vineyards and citrus farms dotted all over the rural areas outside Cape Town.

The majority of trade unions in South Africa are male dominated – with many traditionally setting aside only the second vice-president position for women. But in Sikhula Sonke, 90% of the leaders are women, from the top downwards.

The union’s constitution says that no man will ever be allowed to be elected president or general secretary of the union in its lifetime, and the union makes all new male members sign a joining pledge that they will never commit any kind of violence against women – and that if they do so, their union membership will be terminated.

“Two years back two male members lost their jobs because the one stabbed his wife with a knife and the other one committed sexual harassment and it was proven. For that reason we did not represent them, because it was against the organisation’s principles”.

Pekeur is adamant that having a job can raise a women’s self esteem – but says that only a decent and permanent job comes close to putting women on an equal footing with men.

In South Africa, commercial farmers usually cut their overheads by employing workers on a seasonal basis only.

Pekeur describes the time that Sikhula Sonke member, Gertrayda Baartman, decided to attend the Tesco’s annual general meeting in London in 2007 so she could tell them they bought from the farm she worked on was not ethically produced.

“She managed to get there and bought one share for five pence. She stood up in the meeting and – we were so proud – spoke perfect English even though she only has a Grade Three education because she had to go and work on the farm from a very early age”.

Baartman told the Tesco AGM that she was a seasonal worker who works only four to six months a year. “She said to them, how ethical is it when I have to work with pesticides using only my bare hands, when I don’t earn enough to feed myself and my family, when I don’t even have access to a toilet?” recounted Pekeur.

“Baartman also asked them how she could live a life of dignity if she has to beg to stay alive, because for the greater part of the year, she is unemployed. I think that says it all,” Pekeur told Panos.

With women bearing the brunt of the HIV epidemic in South Africa, and violence against women still a major problem, Pekeur does not think women have genuinely equal status with men yet.

“Women are still pushed into the informal economy and in agriculture, we are doing picking and pruning because farmers say we have nimble fingers. Two thirds of seasonal jobs on farms where there is no job security, are held by women” said Pekeur.

Her union is making inroads though – on one farm Sikhula Sonke has negotiated maternity leave for female workers, even for seasonal workers. Another farmowner eventually agreed to start a pension fund for all workers on his farm, and contributes to the fund even during the months that the seasonal workers are not working.

Since the days of apartheid, farm workers have been evicted frequently – whenever they fall ill and cannot work for a while, or if their employers decide to fire them. This has always been particularly hard on them and their families who lose not only their source of income, but their homes, sometimes their access to a farm school, and often access to the graves of their ancestors who were buried on the farm.

Even with a post apartheid law – the Extension of Security of Tenure Act – giving farm workers some protection, Sikhula Sonke spends much of its time fighting off evictions.

Eighteen months ago, Pekeur organised an ambitious campaign aimed at highlighting the plight of farm workers facing eviction. About 100 Sikhula Sonke members converged on a flower farm whose owner wanted to evict the workers ahead of selling the property, and camped out for a few nights before moving on to Parliament in Cape Town, where the large group camped for two nights.

The South African government has a large budget running into tens of millions of pounds for land reform, and Pekeur is currently negotiating with the department of Rural Development and Land Reform for pockets of barren land where women farmworkers can set up co-operatives, and take control of their own future.

Nearly three years ago, Pekeur highlighted the problem of large commercial farms leaving big tracts of land to lie barren. On women’s day, she organised a march of farmworkers and sympathetic activists from the small rural town of Rawsonville to a farm where fertile land had never been planted.

The group of about 300 people converged on the land and planted a crop of different vegetables, prompting the local government office to promise that they would start negotiations about buying the land with the farm owner.

This promise was never fulfilled, but despite this, Pekeur says she has approached the government about buying several other pieces of land. In one case, the owner was willing to sell the women a dilapidated farm that was no longer being used, and government was willing to buy it. But the owner asked for double the market price, scuppering the negotiations.

Women have to organise themselves if they want to see a better future, says Pekeur.

“I actually think the time is here for women’s revolution. People say we Sikhula Sonke women act too much with our emotions because we don’t always go for hardcore salary issues only. But we fight for a toilet in the orchards, we fight for kindergartens on farms. When you change the life of a woman you change the lives of everyone around her” said Pekeur.

“Why do men feel threatened when women take leadership? They will benefit too from the impact of the work that women do.”

Currently trying to assist some of her members who contracted tuberculosis, apparently as a result of being housed in pigsties on a farm, instead of houses, Pekeur’s job goes far beyond that of other South African trade union general secretaries, who spend much of their time on planes flying to different meetings.

Yet the stress of fighting a seemingly unending battle for living conditions just above what many would consider unbearable doesn’t get her down, she says.

She writes poetry and songs and is set to launch a CD of her music on May 1st. “I wrote my first poem in the toilet when I was eight years old. It was called “is there anybody out there who understands?”. I don’t drink or smoke and this is my way of relaxing” she added.