You are here: Home » Blogs & features » Print features » What Bali means for China

What Bali means for China 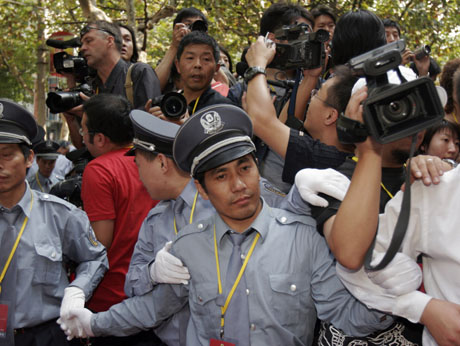 China played a critical negotiating role in the fraught UN climate summit in Bali. Its next challenge is to satisfy the demands of the world’s media.

The UN climate summit in Bali, Indonesia, in December 2007 will probably be best remembered for the executive secretary, Yvo de Boer, dramatically walking out of the conference hall in tears. In less dramatic but more important ways China significantly advanced the negotiations, with huge implications for global efforts to tackle climate change. And it also learnt an important lesson about itself.

Su Wei, deputy head of the Chinese delegation, took the initiative on the first day when he proposed a working group on emissions reductions by all developed nations. Significantly, he added that developing countries should do more” to address climate change, and the developed countries must provide financial resources, technology transfer and capacity-building”.

It was the first time China had proposed substantive undertakings by developing nations. The proposals had been approved by the State Council and the country’s highest leaders.

This change in China’s attitude won wide praise. “Many developing countries, united in the G77 plus China, have come to Bali with considerable ambition and are showing flexibility,” said Hans Verolme, director of WWF’s global climate change programme.

China’s proactive stance was rooted in its domestic efforts to reduce emissions. China has “pledged to reduce energy consumption… by 20 per cent over five years”, wrote UN secretary-general Ban Ki-moon in the Washington Post, “not far removed, in spirit, from Europe’s commitment to a 20 per cent reduction in greenhouse gas emissions by 2020.”

With 40 members, the Chinese delegation in Bali was the largest from any developing county. At the Kyoto negotiations in 1997, by contrast, there had been fewer than ten delegates.

“We had so few people, but so many topics to talk about, that we couldn’t get the chance to sleep during the last two days,” said Lu Xuedu, an official from the Ministry of Science and Technology. “Fortunately, now climate change has become a very important issue for the Chinese government.”

The delegation also included some non-government members, including Professor Zou Ji of China’s Renmin University. Since 2000 he has worked with China’s national climate change office under the National Development and Reform Commission (NDRC), to deal with technology transfer.

When the negotiations on technology ended in the early hours of 12 December, Zou expressed deep disappointment. “China needs finance to fight climate change, but we need technology more,” he said. “We are not here to beg. According to the convention, it’s the duty of developed parties to transfer technology to developing parties. But some developed parties didn’t show their sincerity, they are putting the convention in a helpless situation.”

Xie Zhenhua, head of the Chinese delegation and NDRC’s vice-chairman, explained that China is trying to lower energy consumption per unit of gross domestic product. But it lacks clean technology and cannot afford the high prices charged for it. What is needed is an international technology transfer system to help developing countries get technologies at a reasonable price, he said.

But there are significant obstacles. Alexander Karsner, assistant secretary of the US Department of Energy, pointed out that most of these technologies are owned by private US companies, and Washington must protect their intellectual property rights.

At the last moment, the US delegation compromised and accepted a new text agreeing this point. The Bali Roadmap was born. “The US is still not taking the right position, but it is now on board”, Su Wei commented at the time.

China’s commitment, along with other developing countries, to discuss adopting “measurable, reportable and verifiable” measures to slow its emissions is not equivalent to developed nations’ undertakings on binding emissions cuts, said Yu Jie from the China office of the Heinrich Böll Foundation. “But it will undoubtedly bring huge pressure to bear on China’s economies and societies”.

So China was instrumental in securing an agreement the developing world could accept. But how did China explain its position?

During his fortnight in Bali, Professor Zou was often interviewed by both Chinese and other journalists. Some members of the delegation, though, are still not used to talking to the media. The foreign press was very keen to interview Chinese representatives, but the delegation had no spokesperson to deal with them.

Gao Feng, director of the legal affairs department of the UN Framework Convention on Climate Change, is also former head of the Chinese delegation. He felt that China’s public relations strategy left room for improvement.

Indeed, the world is largely unaware of the China’s work in dealing with climate change and cutting emissions and energy consumption. It has “done a lot, but talked little,” admitted Su Wei.

Before leaving Bali the delegation spent time discussing the need for better foreign media communication and the importance of providing accurate information. So journalists covering the next summit, in the Polish city of Poznan, may find the Chinese delegation more open to them, and more convinced of the need to explain their country’s position at every stage of the talks.