You are here: Home » Blogs & features » Print features » When every drop counts

When every drop counts 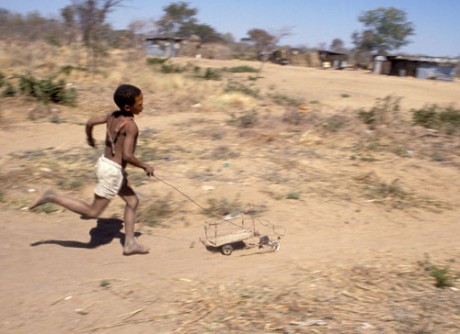 “The kids drive me crazy,” laments Ndaafetwa Hifekepunye. “After going through all that trouble to collect rainwater, they open the tap on the tank and spray the water around. If it wasn’t for that the water would last longer.” Then Hifekepunye laughs and asks with a shrug, “What can you do? All children like to play with water.” But her smiles fail to hide a sense of desperation.

Yes of course all children play with water, but here – in one of the driest places in Africa – a severe hiding is the appropriate response to such foolishness, Hifekepunye seems to think. Water is precious, not a plaything.

Adapting to a failing rainfall

The Omusati Region of northern Namibia is on the margins of what any farmer would consider arable land, with temperatures routinely hitting 40 degrees Celsius or more and rainfall seldom exceeding a pitiful 270 millimeters per year. To make matters worse 83 per cent of the little rain that does fall evaporates as soon as it hits the ground.

The people living here have no alternative to subsistence farming. Skills and opportunities are scarce, so whoever doesn’t leave scrapes a living herding goats or planting crops such as millet. In a report to the United Framework Convention on Climate Change, the government of Namibia has predicted global warming will cause a temperature rise of between 2 to 6 degrees Celsius in Namibia, while annual rainfall could diminish up to a further staggering 200mm.

In a country where 70 per cent of the population practices some form of agriculture this is a problem.

Hifekepunye, who like many of her generation doesn’t know her age, has 14 mouths to feed in her homestead. But now, at the beginning of the rainy season, her land still lies barren, the dust so thick you can taste it in the air.

In mid-November the rains that normally fall from October to May were already more than a month late. All over the region farmers tell the same story: the growing season is getting shorter and shorter and the rains more and more unpredictable, putting stress on animals and people alike.

Even for simple things like drinking and cooking water the women have to walk for hours to the nearest water point. “As a little girl, every day my sisters and I had to walk several kilometres, carrying heavy buckets of water for the household. The soil was so hot it would burn the underside of our feet,” Hifekepunye recalls.

She tells the story sitting in front of a large plastic rainwater-harvesting tank. It seems incongruous in the traditional kraal, which mostly consists of clay huts, mixed with a few brick buildings with iron corrugated roofs.

Alien as it looks, the tank has dramatically changed life in the rural community.

“Harvesting the water right here in the village has made my life as a woman much easier,” Hifekepunye says. “I don’t have to travel long distances anymore.”

As an experiment to help families adapt to ever drier conditions, the Country Pilot Partnership (CPP), supported by the United Nations Development Programme (UNDP) and the Global Environment Facility (GEF), distributed 70 water tanks ranging from 2,500 to 5,000 litres to households, schools and hospitals.

Hifekepunye’s homestead received the water tank for free but had to finance a cement base and gutters linking it with the roofs out of their own pocket.

She thinks it’s a fair deal. “The advantage is significant, especially during the rainy season when the authorities close the tap at the water supply point two kilometers away as a cost-saving measure. Because of this tank we have clean drinking water right here.”

No such luck for 16-year-old Maria Eelu from the Omulai settlement. This morning she has travelled several kilometres to the Calueque canal to fetch water.

She filled 19 25-litre drums with water. Now she is supervising a group of small children as they lift the drums onto a donkey cart, careful not to spill a drop. “This is about a two-day supply for several households,” Maria explains. “Our village is three kilometres away and doesn’t have running water.” The donkeys patiently gaze into the mud at their feet waiting for the slow journey home.

The Calueque canal, which diverts water from the Calueque dam in nearby Angola, is a mere two metres wide but is one of the main water supplies for an area where a million people – half of Namibia’s population – live.

For famers Calueque is of major importance. Although banned by Namwater, Namibia’s only water company, which maintains the canal, the farmers covertly use the canal to irrigate their crops when there is not enough rain.

Paulus Amutenya is one of the farmers that uses the canal and a nearby lake, also fed from downpour from Angola, to irrigate his crops. Unlike the traditional method of flood furrow irrigation, where farmers flow water down small trenches running through their crops, he now uses drip lines supplied by the CPP programme to cultivate his crops.

“Without rainfall we have to irrigate more,” he says. “With the drip lines that the project gave us we can efficiently distribute the scarce water when and where we need it.”

The adaptation measures that the CPP put in place are hardly high-tech or unique, concedes programme manager Andreas Shilomboleni, but they work and they are cheap.

“Through the climate change adaptation programme we have introduced simple and cheap methods such as irrigation lines, water pumps, drought resistant livestock and plant breeds, or basic water harvesting technology,” he says.

A few kilometres down the road, deep in the Mopane woodlands of the border area, Andreas lifts a water pump from the back of his Landcruiser. Immanuel Hambiya’s face breaks into a smile.

“We need the pump to bring water from the nearby lake,” says the subsistence farmer who grows green peppers, cabbage, sweet corn and many other fruits and vegetables on his 2.5 hectare plot.

“These years the rains come late and are not enough,” explains Hambiya. “So the water level in the lake drops and we have to pump it from further and further, or migrate to where the water is, or simply plant less crops.”

Before he had a pump and drip lines Hambiya also relied on traditional flood furrow irrigation, one of the oldest methods of irrigation. “It’s a method that is hard to control,” he explains. “If there is a lot of water at once, the crops will drown and become vulnerable to pests and fungi. It was also a very wasteful and labourious way of watering the plants. With the drip lines we are much more efficient.”

According to Hambiya, after introducing the water-saving irrigation method he saw his yield increase by 10 per cent, while using much less of the valuable water.

As water becomes an even scarcer commodity in arid Namibia, small but vital efficiency gains like these can make difference between survival and starvation.