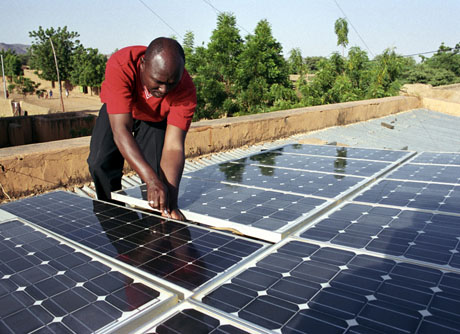 Stretched-out plains with dust devils and unrelenting sun are the trademarks of the barren Northern Cape in South Africa. Every year the province records some of the highest numbers of sunny days worldwide. Rainy days are as rare as hen’s teeth.

This is bad news if you’re a farmer, but great for South Africa’s electricity provider Eskom, one of the biggest power companies in the world, which is building a multi-million dollar solar plant near Upington in the Northern Cape. The potential of solar is enormous, with scientists estimating that every year a square kilometre of desert receives solar energy equivalent to 1.5 million barrels of oil.

The Upington project is the first major solar energy initiative on the continent. With South Africa’s current electricity crunch, and the need for renewable power in an economy where 90 per cent of power is generated by coal, it seems this plant is long overdue.

Until now solar power has been one of the most neglected renewable technologies. Solar power provides less than one per cent of the world’s energy, according to the global financial services firm UBS. However, it appears that the potential of solar is finally dawning, with UBS calculating 50 per cent year-on-year growth in the sector. And figures released in January by the Earth Policy Institute show solar electricity generation is now the fastest-growing electricity source. Germany is leading the way, followed by Japan and the United States.

But Peet Du Plooy, WWF’s trade and investment advisor for South Africa believes the true cost of coal-based electricity to be higher. “I think it is worth re-evaluating the view that renewables are two to three times more expensive,” he says. “New coal power is no longer as cheap as we used to think. While Eskom has cited R10/watt, Medupi’s [South Africa’s newest coal-powered station] actual price comes in at R16.40/watt… and that’s capital cost only.”

Du Plooy points out that the price of coal has climbed steeply in the last three years and that the environmental cost of fossil fuels also needs to be factored in. And he is hopeful that as solar power sees increased uptake, it will become cheaper through economies of scale.

The single biggest cost for solar cell makers is the high price of raw polysilicon, which costs US$300/kg and makes up 70 per cent of the structure. But the price of raw silicon is expected to fall by two thirds over the next three years. So the race is now on to find the best solar technology, and the company which perfects it is likely to make a killing.

Nanosolar, which has manufacturing sites in the United States and Germany, claims to have developed the world’s most economical solar panel, using’thin film’ technology. It hopes to be the first manufacturer to profitably sell solar panels at as little as US$0.99 per watt – comparable to the price of electricity generated from coal.

The company aims to build solar power stations up to 10MW in size, which can be up and running in six to nine months compared with 10 years or more for coal-powered stations and 15 years for nuclear plants.

South Africa has its very own contender in the ‘thin film’ race. Solar guru Professor Vivian Alberts, a physicist at the University of Johannesburg, has developed a design believed to be the most advanced in the world. His panels are now ready for commercial use, and are expected to cost about 14 rand (US$1.80) per watt.”It will be possible for households in South Africa to afford their own solar generation,” he says.

After evaluating various solar technologies, Eskom has decided to use concentrated solar power (CSP) at its plant in Upington. This employs an array of mirrors controlled by tracking systems to focus a large area of sunlight into a small beam. The resulting heat is used to generate electricity.

“There are numerous untested solar technologies out there. However, their feasibility remains unknown until developed to a reasonable scale,” says Sipho Neke, spokesperson for Eskom.

CSP also has the backing of the World Bank, which views it as the only zero-emission technology that could potentially rival coal-fired power. However, solar technology only makes up a small slice of the pie in current projections of South Africa’s future energy mix.

And despite Eskom’s enthusiasm for solar, the company is reluctant to estimate how much it will invest in the technology over the next decade, saying this will depend on the success of the Upington project. But with the solar revolution that appears to be gripping the world, South Africa would be foolish not to follow the sun.