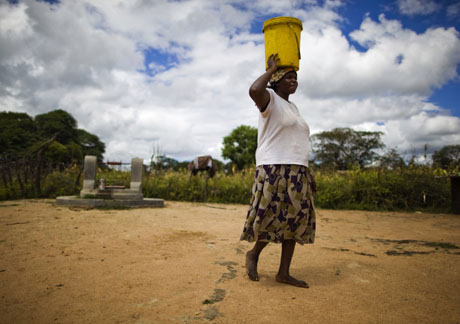 Zimbabwean women are denied access to land under the government’s land reform programme, a new report has found. According to the report, women make up 51 per cent of the population and yet there has been little mention of women, if at all, during the two phases of the land reform programme. The report argues that unequal power and gender relations in institutions such as the village have prevented women from accessing land.

“According to the government, land redistribution has been completed and yet most women failed to get access to land,” writes the author, Dr Dominic Pasura, a research fellow at the department of geography at the University College of London, UK.

Zimbabwe’s Land reform and Resettlement programme (LRRP) was introduced to “improve the welfare of the poor and landless” by Robert Mugabe’s post-colonial government in the 1980s.

Dr Pasura writes: “At independence, Zimbabwe inherited a racially skewed distribution of land that excluded most black Africans from access to land.”

According to the 2001 study by Annelet Hart-Broekhuis and Henk Huisman, 6,000 white large-scale commercial farmers controlled about 15.5 million hectares, and 840,000 communal area farmers controlled 16.4 million hectares at the time of independence in 1980. LRRP Phase I ran from 1980 to 1997 and resulted in modest transfers, the study reported. However, Phase II began in 1998 and saw a more radical approach.

During the first phase of the land reform programme, the study reports there was a bias towards men in the resettlement model. This is because “land was given to individual households, which tended to mean male households”, the report found. The second phase of LRRP saw an intensification of land redistribution. “War veterans, squatters, ruling party militants and state officials” were the main beneficiaries of the second phase of the LRRP programme, the study reported. Women were again missing from the programme.

However, women’s groups in Zimbabwe have been vocal about this issue. The Women and Land Lobbying group had limited success in lobbying the government, the study reported. According to the report, “President Mugabe announced in October 2000 that female-headed households would receive 20 per cent of redistributed land”. However, this did not include married women, the study reported.

In response to a question during a news interview given in 2000, in which the former Vice President Msika was asked why women did not have land rights, he said: “Because I would have my head cut off if I gave women land… men would turn against this government”. He added that giving wives land or even granting joint titles would “destroy the family”, the study reported.

“This is an explicit admission by the government that if there is a man and a woman: a man is entitled to land,” writes Dr Pasura, adding: “Women can only get land in their own right in a world devoid of men.”

Moreover, the report suggests that the male bias in Zimbabwean society and reflected in the Vice President’s statement stems from colonial times where “changes in social structure … eroded women’s rights to land along with the erosion of women’s status in general”. Whereas in pre-colonial times, women had access to land, the study reported.

The researcher analysed documents such as government papers on land reform and reports from women’s groups. Due to the political instability of the country, the author has not been able to conduct first-hand interviews, the study reported.

According to the study, the Zimbabwean constitution has outlawed discrimination on the basis of gender. However, this does not include rules relating to land allocation. Zimbabwe has a “plural legal system”, in other words, state and customary laws co-exist, the study reported. In the report, customary law refers to African traditions which have become an intrinsic part of the accepted and expected conduct in a community.

Many studies, such as the United Nations Development Programme 2002 Zimbabwe Land Reform and Resettlement report, have cited that customary law has blocked Zimbabwean women from accessing land.

The report argues that customary law should not be outlawed rather, there needs to be huge change in attitudes and institutions to ensure the rights of women to access land.

Title: A gendered analysis of land reforms in Zimbabwe