You are here: Home » Oral testimonies » Living with poverty: Pakistan » Introduction to the project

These accounts cover many aspects of poverty, but all convey a powerful sense of exclusion and marginalisation.

Pakistan has an agricultural economy with a network of canals irrigating much of its cultivated land. 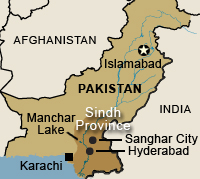 These interviews were gathered in two areas of Sindh province, in the south of the country.

The community near Manchar Lake struggles to survive the impact of man-made pollution caused by a massive drainage project, while those living in the squatter settlements of Sanghar City have more economic opportunities but no illusions about the place of the poor.

Manchar Lake is Pakistan’s largest freshwater lake. A major source of water in an arid region that is also one of the country’s poorest, the lake has recently become an ecological disaster.

The area once teemed with fish and birds, and supported a variety of economic activities. But a massive drainage project, including the construction of flood embankments and artificial channels linking the River Indus to the lake, has brought with it pollutants, including agricultural chemicals and industrial waste.

Since the early 1990s the polluted lake has been steadily deserted by wildlife, and by many of the families who lived off it. Those who remain – often too poor and indebted to contemplate moving away – are left battling spiralling debts, ill-health from contaminated water, and dwindling fish stocks. Some work the land, but yields have been badly hit by salination of the increasingly water-logged soil.

The Manchar narrators are predominantly from fishing families, but their stories touch upon different occupations. All bear witness to the environmental pollution and its knock-on effects.

The lake, its forests and wildlife also attracted local tourists and hunters, but the environment is now so degraded that few come to visit. With so little economic activity, opportunities for casual labour or petty trade are rare, and the narrators describe a variety of ways in which they keep destitution at bay.

Sanghar City is an urban settlement in the district of Sanghar, close to the Indian border. Largely flat, the district consists of a fertile plain in the west and barren desert to the east. It is a major producer of cotton, wheat and sugarcane, utilising those areas watered by a canal system fed by the River Indus.

Much of the district’s population is poor, and villagers are increasingly leaving the rural areas for towns and cities. These narrators live in squatter settlements – Kachi Abadis – on the fringes of Sanghar City, and all are struggling to find work. Tailoring, repairing shoes, casual labour, construction work, petty trading and begging are among their strategies for survival.

The Sanghar men and women describe a constant battle with the authorities to make basic services – water, gas, electricity – available. Their fees are higher because contractors claim it costs more to bring infrastructure into the narrow alleys of their Kachi Abadis.

They are forced to provide their own security and have no confidence in the police or political representatives to protect their interests. Several live in constant fear of losing their homes. The continual insecurity, and the way poverty reinforces poverty are key themes of this collection. Despite this, several men and women have worked hard to break this cycle.

Disillusionment with their political representatives, and a strong belief in education for their children as the only way out of poverty are common to both collections.

Those living on the edge of Manchar Lake have specific concerns relating to the pollution of their environment. Ill-health, for example, is widespread and the cost of treatment one of the most common reasons why families are forced to take out loans at punitive rates.

The situation for fishing families, who are the poorest of the poor, is under stress from the increasing grip of middlemen (who sometimes force fishermen to sell their catch well below market rates). The same middlemen are often the only source of loans.

Non-fishermen in the area generally regard fishing families as “second-class citizens”, a prejudice borne out in several accounts. While everyone living by the lake is impoverished, the education figures for children of fishing families are revealing: 90 per cent of boys and 95 per cent of girls have never been to school.

[A note on currency: Pakistan’s unit of currency is the rupee. In January 2007 61 rupees equalled US$1. One lakh is one hundred thousand.]

Introduction to the project is a key theme of the Living with poverty: Pakistan oral testimony project.

The cost of poverty