You are here: Home » Our work » Our methodologies » Dialogue 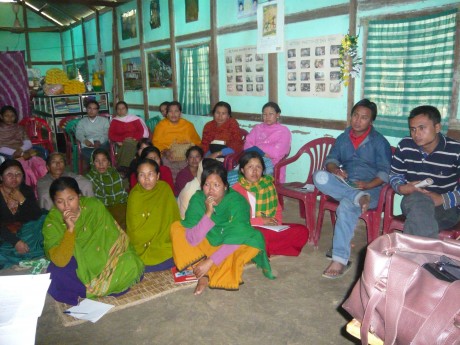 The free and open exchange of ideas and experiences between all the different individuals and groups affected by an issue is vital to increased understanding, better decision making and greater accountability. We work with our partners to create inclusive spaces for dialogue and discussion at local, national and international levels: from rural women’s clubs to international policy roundtables, or from public meetings to online networks.

Improving healthcare for the seldom heard

This week the NHS Confederation debates how to include marginalised voices in improving services, with help from Panos London’s Clodagh Miskelly.

One woman living with HIV talks about the importance of her faith in living with her condition and the challenges of tackling stigma and discrimination amongst Muslims.

An interview and photography slideshow looking at one woman’s experience about trying to find work while living with HIV. She describes the feeling of vulnerability that she encounters, even in such innocuous situations as taking a bus ride.

A young African gay man talks about what happens when you go to get tested for HIV. He challenges the appropriateness of some of the questions he finds discriminatory and can stop African men from getting tested.

Richard Kavuma visits with the Naz Project London and learns more about some of the obstacles faced when trying to raise awareness, understanding and prudence about HIV.

Panos London, working with Naz Project London, is pleased to announce a new publication – Beyond Consultation: a guide for health commissioners.

Posters & stories from Beyond Consultation

During the Beyond Consultation project participants from an African women’s group and a group for young African men who have sex with men produced some materials intended to communicate their views, concerns and priorities to NHS staff from sexual health and HIV services. These posters and short audio and video clips were intended as conversation…

Ask Bhan your questions about the life of a social activist in India.

“I am alive because I went to test otherwise I would be dead… People think because I am HIV positive, that is the problem. But really the problem is not knowing your HIV status.” These are the words of Khetsiwe, a 43 year-old single mother from Elangeni in Swaziland. Her experiences were being recorded by…

Uganda’s elections: a game of football?

Richard M Kavuma offers a compelling insight into the Ugandan election campaign of February 2011, which Yoweri Museveni won by 68% of the vote, asking whether the best team is going to win, or whether it’s simply a case of the match being rigged.

As millions of Ugandans head to voting booths today, Friday February 18th, the country’s main opposition leader has warned there could be a mass uprising, similar to that in Egypt and across the Middle East, if the poll is rigged.

This case study describes some of the methods and activities developed by the RELAY programme, applied to Kenyan governance and tax.

Panos London's Relay Programme Manager, Annie Hoban, talks about a new case study that shows how researchers and journalists worked together to talk tax and governance in Kenya.

Overview Armed conflict is an all too familiar theme for journalists in many parts of Africa and Asia. But what happens when the fighting stops? Do people just put down their guns and go home? Do they even have homes to go to? And how will they make a living and support their families? The…

Communication at the heart of change

Communication at the heart of change explains the essential role that information and communication plays in development.

The forgotten of war

In 1993 fighting and unrest led to as many as 250,000 ethnic Georgians being expelled from Abkhazia, a region which declared independence from Georgia in 1992, causing them to become refugees and internally displaced people.