You are here: Home » Our work » Themes » Climate change 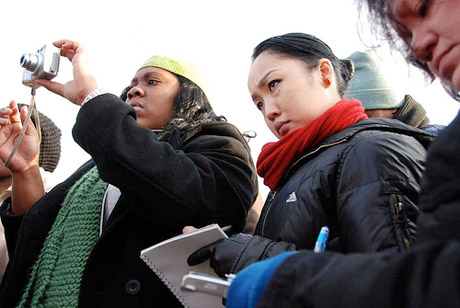 One of the major challenges facing people affected by environmental change, campaigners and decision-makers is a lack of information.

Many people are unaware of the decisions made on environmental policy that will have a direct effect on their lives. Conversely, international and national policymakers do not always know about the needs and priorities of the local communities they represent.

We work primarily with the media to enable information about national and international decision-making to be communicated as widely as possible. The media are also an important outlet for local people to express themselves and make their views known, on their own terms.

However, it is a challenge to convince mainly urban-based journalists to work with excluded communities and to recognise the importance of listening to these communities. We train these journalists, offering two tiers of support:

We also work with editors, to increase the chances of the results of this support being broadcast and published.

Our work with local communities most affected by environmental issues involves finding ways for them to articulate their concerns and needs in ways that are culturally appropriate and tailored to them. For example, we have trained people to gather the stories and experiences of people in their own communities and helped them to identify the best ways for this information to reach key decision-makers.

The media has a key role to play in raising awareness about climate change at both global and local levels. The CCMP project is an exciting programme designed to ensure this will happen.

Why the media matters in a warming world

Climate change journalism can protect people and promote development. This policy briefing explains how supporting journalists can help countries to implement policies that work, while meeting their international obligations.

Reporting REDD is a new media pack aiming to give journalists an overview of a vital issue in global climate change negotiations. REDD – reducing emissions from deforestation and forest degradation in developing countries – is a proposed mechanism to slow the loss of forests, but how it

An ongoing series of reports exploring the key environment and development issues that are emerging across the globe as climate change begins to bite.

Climate change: Adapting to the greenhouse

Climate change will mean a different world for us all. For millions it will bring higher temperatures, less water, scarcer food and more risk of natural disasters, such as floods and storms. But every country can help itself to cope by accepting and adapting to this new reality.

A mine of information?

Revealing the gaps in consultation and communication around Rio Tinto's ilmenite mine in southern Madagascar.

The extent to which biofuels can play a beneficial role in replacing fossil fuels is hotly debated.

The media play an important role in stimulating discussion in developing countries. Yet this study shows it has a poor understanding of climate change and expresses little interest in it.

The GM debate – who decides?

This report asks who is involved in and who is being left out of the debate on genetically modified (GM) food  – and how the media is covering the GM controversy.

Voices from the mountain: Pakistan

Herding in the pastures, hopes and fears about a new road, and education are key themes in this collection of interviews from a community in the far north of Pakistan.

Voices from the mountain: Mexico

Interviews with the four indigenous Zapotec communities, for whom outside pressures and influences are increasing as never before.

Voices from the mountain: India

Interviews with communities from Uttaranchal and Himachal Pradesh, India.

Voices from the mountain: Peru

Interviews from Cerro de Pasco, where people's herding lifestyle has undergone great changes, principally as a result of Peru's most important industry: mining.

Voices from the mountain: China

Interviews from two contrasting mountainous areas: with minority peoples in the southwest, and with the majority Han in the northeast.

Voices from the mountain: Poland

These interviews from Poland show how the complex political history of Europe's last 80 years has had a profound impact on a relatively remote highland area.

Voices from the mountain: Ethiopia

Testimonies gathered from the northern highlands of Ethiopia, where people are concerned for the future, if also proud of their heritage and identity.

Voices from the mountain: Kenya

Interviews gathered from the upper and lower slopes in Mount Elgon district, in Kenya's Western Province.

Voices from the mountain: Lesotho

Interviews from the highlands of Lesotho, where a major water project is about to displace many villagers.

Just a lot of hot air?

Explains the issues and concerns, possibilities and dangers around agreeing joint action on reducing fossil fuel use.

Cities of the future

An examination of the challenges and debates around growing urbanisation, particularly in the developing world.

An overview of the debate over genetically modified crops and the need for accurate and understandable information on the issue.

Looks at how the rising demand for water can and should be met, and the pitfalls of the privatisation of water supply.

Kashmir ‘paradise’ runs out of water

The Kashmir mountains are a beautiful setting, but the impacts of climate change are beginning to be felt as the water seems to be drying up.

In this article for the Climate Change Media Partnership, Armsfree looks at what is being done in Nigeria to allow local rainforests to begin to grow back.

Brazil has dramatically slowed down the rate of Amazon deforestation in the past six years. But restoring the swathes of rainforest is another huge challenge – and one that is meeting powerful political opposition.

With the worsening food shortage in Mali, Kaidia tells us how local radio is sharing valuable information with rural communities.

Killings in the Amazon: “I am alone in this war”

The Brazilian government claims destruction of the Amazon has fallen to its lowest level in 23 years. But environmental activists continue to be threatened and killed by loggers. Ana Aranha met one woman forced into hiding by assassins.

Kaidia speaks about how her community has dealt with rain shortages and drought over recent years.

These photos take you through a day of working as part of the Climate Change Media Partnership at the Durban 2011 climate change conference.

Failed harvests and low food reserves in the Sahel, particularly Mali, Chad, Mauritania and Burkina Faso, means millions of people are facing a food crisis in early 2012. Kaidia Samaké explains how the lack of rain has caused her own harvests to fail and what this means for her and her children.

Q&A with Argentina’s delegates at COP17

Argentinian journalist María Gabriela Ensinck puts some questions to delegates from her country on the final day of COP17 in Durban.

Brazil’s hopes and fears at COP17

As the UN COP17 climate change talks in Durban enter their final day, Brazilian journalist Flávia Moraes asks delegates from her country what they hope to achieve and whether Western governments are taking the views of Southern countries seriously enough.

Nigeria, once at the heart of the tropical rainforest belt, has lost around 95 per cent of its forest cover and now imports 75 per cent of its timber. But an initiative – which calls on people living around the forest to repair the damage – is underway.

Before leaving for Durban, Wendi Bernadette Losha explained to Leocadia Bongben why ‘slash and burn’ farming techniques are bad for both local agriculture and the environment and why the Durban conference must provide alternatives for small scale farmers.

Salima village lies onthe main route to Loiyangalani, allowing women and children to beg for food and water from passing traffic. There is very little in this remote, arid area of Kenya. Yet there is one thing in abundance in this desolate spot: wind.

Scientists in Cameroon link changing weather patterns to a fungal disease of the staple cocoyam crop. Preventing or treating future damage is essential in a country in which rising food prices have caused unrest and continue to threaten food security.

South Africa’s energy policies will come under scrutiny as it hosts the UN climate change talks in November.

From next month, five hospitals in remote mountainous provinces of Kyrgyzstan will start using solar panels to transform the sun’s rays into clean energy and hot water. Komila Nabiyeva spoke to the Kyrgyz delegation at the recent UNFCCC climate change talks in Bonn to find out more about the project

Following a fire, planners seized the chance to build homes designed to cope with Riosucio’s increasingly devastating floods. More houses like these will be needed to adjust to Colombia’s ‘new climate reality’.

A network of tiny islands in Tamil Nadu is shrinking due to a rise in sea water in the estuary. Experts fear the impact of a rise in sea levels on India’s coasts yet CCMP fellow Gokul Chandrasekar finds the Indian government has no regulation for the impact of climate change on the coastline.