You are here: Home » Our work » Themes » Governance 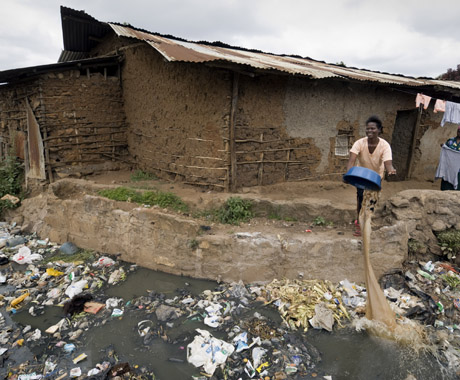 The Millennium Development Goals aim to halve the number of people in the world living in extreme poverty by 2015. But questions often surround commitments to fairer policies on debt, aid and trade, and progress towards the goals in many low-income countries is slow.

Discussion of poverty reduction strategies is often confined to a relatively narrow group of policy actors, and the opinions of the public – particularly poor people – are often insufficiently represented in decisions that will affect their daily lives.

We believe it is essential that there is greater awareness and understanding of these issues for the public to hold policymakers to account for their decisions – or a lack of them – and to play a part in poverty reduction debates.

Our governance programme uses communication to strengthen the participation, transparency and public action needed to hold the powerful to account. We select projects where communication can make a difference to the social inclusiveness of decision-making.

Panos London works to reduce poverty by strengthening accountability, and transparency, in governance

Children have a key role in supporting families and communities affected by HIV and AIDS, yet their views and contributions are often ignored. This paper examines issues in children’s participation in responses to HIV and AIDS.

Many international donors are yet to appreciate that a vibrant, independent media sector is essential for development and needs support.

Making or missing the links?

Examining the polarised debate on the links between trade liberalisation, economic growth and poverty reduction.

This media toolkit looks at how global trade rules are negotiated within and outside the World Trade Organization, and how journalists can raise debate on whether trade deals will benefit or damage people's lives.

Some argue that Poverty Reduction Strategy Papers should play a central role in meeting the UN Millennium Development Goals. But are they helping, and are ordinary people being involved?

An introduction to the issues surrounding the international agreement on Trade-Related Aspects of Intellectual Property Rights (TRIPS) and public health.

Poverty Reduction Strategies were introduced in 1999 as the latest template for the world's poorest countries to get out of poverty. This report examines progress so far.

Looking at global commitments to reduce hunger, this report asks how we can produce more food more sustainably, without destroying biodiversity or harming the environment.

How should city governments balance the need to improve life for their poorest citizens with that of creating the infrastructure necessary to stimulate economic growth?

An overview of the World Trade Organization, its history, the challenges that it faces and its critics.

Exploring the links between poverty and health in the new millennium.

An examination of the complex issues around the successor to the Lomé Convention that defined the EU's relationship with much of the developing world for nearly 25 years.

The future for microfinance

The pros and cons of microfinance and its implications for aid spending in other areas.

An overview of the issues and challenges surrounding food security.

The lure of gold

How to ensure that the needs of developing countries and indigenous people are not forgotten in the rush to create profits from mining gold.

An assessment of how the benefits of globalisation – the move towards a global economy where national borders cease to matter – have not been evenly distributed around the world.

Fish: a net loss for the poor?

A global snapshot of the 'fisheries crisis', including case-studies from India, Namibia and Senegal.

Kaidia explains the urgent matters that the new Mali government must attend to – the economy, education and hunger.

Bhan Sahu blogs about a new campaign she is organising, helping those who are being displaced from fertile farmland to make room for 34 thermal power plants.

Kaidia speaks her mind about the recent coup in Mali and reflects on what these changes could mean for the rural south of the country.

Ambra’s support group is helping a young girl who became the victim of ‘mob justice’ after a Manipur policeman’s suicide put her in the firing line.

As part of the Breaking Barriers series, we spoke to Habiba Sarobi: Afghanistan’s first and only woman governor.

Meet Mary Madiga as the newest contributor to our Voices from the Ground blog. Mary Madiga, 39, is a Dalit social activist in Hyderabad, the capital of Andhra Pradesh state in southern India.

When many people are being forced to migrate into cities to find work, Bhan Sahu has been helping rural Indian communities work together to challenge corruption and make the most of government employment schemes in their own villages.

Birgitte Jallov talks about her new book, Empowerment Radio, and the potential for community radio to make a powerful, positive change for communities.

The culture of elections in the state is of bribery, corruption and proxy voting. Democracy – which is based on people electing their own representatives – has become a farce of money power and muscle power.

Bhan returns with a blog for us about social change in rural India and how this can come about by claiming ownership over community affairs.

We are not as politically aware, we mostly watch Pakistan state TV and there is not too much news on this channel. But even though the people are not following the news avidly, there is uncertainty in the air. And people do want change now.

In her first blog, Bhan Sahu tells us about rural entrepreneurs in the Indian village of Vihiri, who are taking their futures in their own hands.

Sampat Pal has become an unlikely heroine to tens of thousands of poor women across India as the leader of the Gulabi Gang (“gulabi”, meaning pink in Hindi, refers to the colour of their saris).

An association of housewives from Gwelekoro all pay a small amount each week. The money can be given as small loans for women in Mali, where it can be difficult for women to get loans or funding.