You are here: Home » About us » Press releases » Marathon runners cross the finish line to boost funds for Panos London 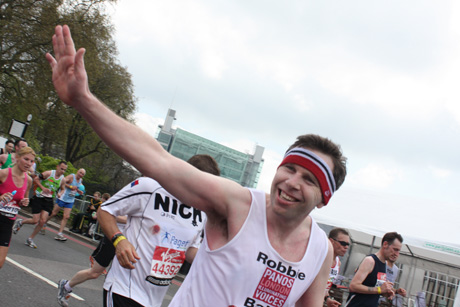 Robbie, running for Panos London at the 2009 Virgin London Marathon

Congratulations to our dedicated team of runners who made the finish line at the Virgin London marathon on Sunday 25th April. Almost £20,000 has been raised so far, which will support our work helping poor and marginalised people around the world get the chance to speak out about issues that affect their lives, and allow them to lead their own development.

We’re extremely grateful to our committed team who have helped make our first running event such a success.

Tom Stewart, 30, an architect and his partner Sally Booyens, 27, a primary school teacher, were part of a 10 strong team of Panos London runners who ran 26.2 miles alongside 36,000 people in the world’s biggest fundraising event. The couple have so-far raised over £1,500.

Tom, who completed the marathon in less than four hours, said he was ecstatic to cross the finish line. “It was an amazing feeling and the atmosphere was just incredible. It’s a big achievement and I’m really pleased that we’ve raised money for such an important cause.”

Sally, who is from South Africa and has taught children orphaned by AIDS, was encouraged to run the marathon by her mother, who runs the 56-mile Comrades Marathon every year.

She said: “My mum inspired me to take part and I chose Panos London because of the invaluable work they’re doing to help children affected by poverty and HIV in KwaZulu Natal in South Africa. It’s a cause that’s close to my heart and I wanted to support Panos London’s efforts to tackle the situation.”

Panos London’s Executive Director, Mark Wilson said: “This was Panos London’s first ever running event and it was a huge success. The charity is extremely proud of its marathon runners and I am delighted that they have raised such a significant amount to support vital communications work in areas such as public health and climate change.

“Communicating how we feel about issues affecting our lives is something that many of us take for granted but millions of people around the world never get the chance to have their voices heard.

“The funds will help us ensure that poor and marginalised people can develop the skills to confidently present their views to decision-makers and be part of the solution every step of the way.”

Rob Kinnaird, 39, who ran the marathon with his partner Emily, said: “I was so happy to see the Panos London team on the course – they really spurred me on. I was flagging at that point and they reminded me why I was doing it and who I was doing it for – I know it’s a bit of a cliché but it helped me get through the last part – and I needed all the help I could get!

“I’m really chuffed that we managed it, especially as I didn’t think I’d be able to run because of my previous ankle injury. Crossing the line was surprisingly emotional, I just felt like hugging the people next to me to say ‘we did it, we did it’.”

Panos London staff were there on the sidelines to cheer our team along and fly the Panos flag. We’ll be out again in force at the Bupa 10,000 run!